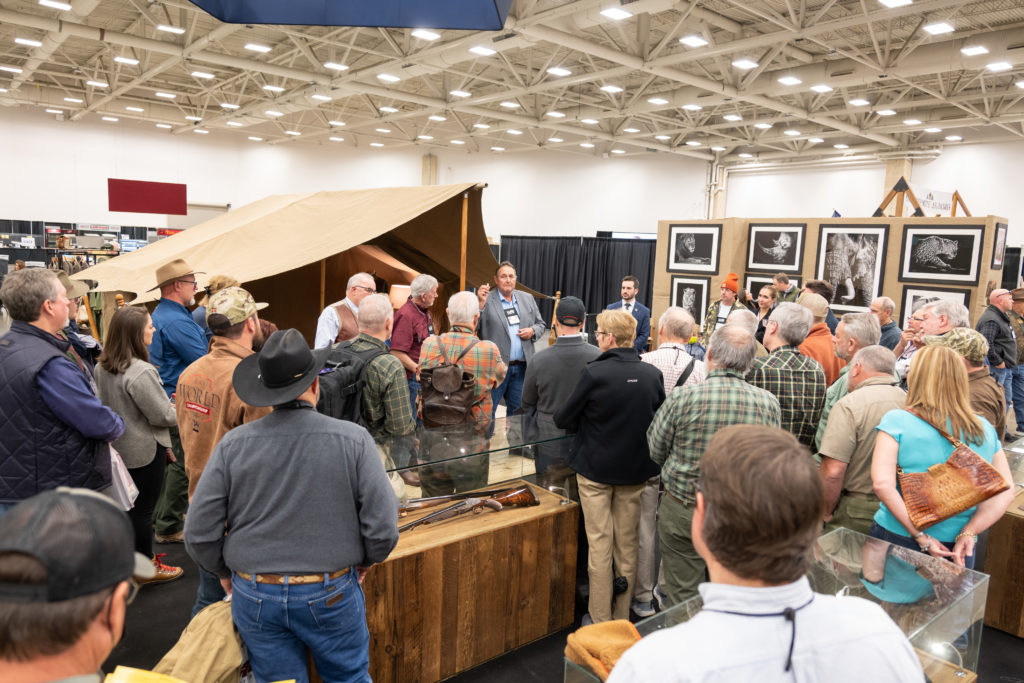 As February draws to a close, we catch up with managing director Marc Newton to find out what’s happened in Pensbury Place this month.

January saw the return of two fantastic North American shows, The Dallas Safari Club (DSC) Convention in Texas and the Safari Club International (SCI) Convention in Las Vegas. Tell us what it was like to be back in the US, and how the shows went?

I’m pleased to say that both shows were very successful for us, especially considering how uncertain the past two years have been. It was fantastic to be back face-to-face with people, shaking hands with old customers and meeting new ones for the first time.

The demand for Rigby products in the US remained strong throughout the pandemic, but even armed with that knowledge we were delighted to receive such a warm welcome. Seeing the reactions from visitors to the new guns we had built over the last two years was great, and it’s so encouraging to see that interest in British gunmaking has lost none of its potency while we’ve been unable to travel to the US. We are working on several exciting new offerings which we hope to reveal at both of the US shows in 2023. I can safely say that we will be back at both the DSC and the SCI next year, and hope to see as many of our American customers as possible.

The DSC Convention saw the winner of the inaugural Rigby Dagga Boy Award announced – do you have any thoughts you would like to share on that?

Absolutely. For those unfamiliar with the Rigby Dagga Boy Award, we invited hunters from across the world to share with us the stories and particulars of the solitary male buffalo they hunted. Our aim was to encourage a shift in the focus for hunters away from the younger breeding age males towards those past their prime, and to collect valuable data on buffalo populations across Africa. A responsible approach to hunting is essential to ensure the continuation of the sport we all love, and the industry I work in, so it’s close to my heart. It’s also been fascinating to read the stories sent in by so many passionate hunters – truly inspiring stories.

The award was won by hunter Franklin D. Cean, who was guided by Buzz Charlton of Charlton McCallum Safaris. Frank shares the story of his award-winning hunt, going into captivating depth about selecting and bagging a suitable Dagga Boy trophy, in this Rigby Campfire blog – A Cape buffalo hunt. I was delighted to present Frank with the Dagga Boy Cup and a Rigby .416 Big Game rifle at the John Rigby & Co. stand at the DSC Convention. As the Professional Hunter who guided Frank, Buzz Charlton received a Rigby .450 PH rifle which was collected on his behalf by his business partner Myles McCallum.

What’s keeping you busy in the Rigby workshop this month?

There has been a steady flow of orders from the two North American shows – and those orders are not just for rifles. A Rigby Land Rover took pride of place in the exhibit hall at the Dallas Safari Club, and it drew plenty of admiring glances. It seems that people didn’t stop thinking about it when they returned home and have since been in touch about procuring one for themselves. We work with the team at Squire Editions to create some truly exceptional vehicles for clients, ideal for stylish and practical hunting expeditions.

We are also seeing the first of our limited run of falling block rifles nearing completion. It’s hard to explain how exciting it is to see such an iconic rifle being revived to its former glory and I’m looking forward to sharing them with our customers. They are beautiful, yet robust examples of the Victorian sporting world brought to life in the 21st century.

Are there any new arrivals in the Rigby online store this month we should take a closer look at?

Our in-house engraver and artist Geoffrey Lignon has produced three dramatic new pieces which I would strongly encourage fans of Rigby Art to look at. Each piece features a study of a beautiful and majestic animal, focusing in particular on their eyes. The Pearl of Sumatra depicts an endangered Sumatran tiger, The Lone Prince a solitary, brooding leopard, and State of Alert a zebra at the very moment it picks up the scent of danger on the breeze. We have 25 limited-edition fine art prints of each piece, and they are available to purchase in the Rigby Shikar Store now. If you are a fan of our artwork, I can assure you that these will not disappoint.

Is there any other news from the Rigby workshop that you would like to share with our readers? Are the team working on any exciting pieces at the moment?

Absolutely. We’re busy working on adding new calibres to our existing range of Big Game rifles. Rigby rifles are synonymous with big game hunting, and we want to ensure that devotees to every calibre find a rifle to suit them here. As I mentioned earlier, work is also underway on our falling block rifles, including a smaller calibre making it ideal for medium game. This is a limited run of just 10 rifles being produced, so they will certainly be rare beasts. We’re also adding a smaller calibre rifle to our Highland Stalker collection which is perfect for European deer and other smaller game. Make sure you keep a close eye on our news and social media for more information about when these new additions will be available.