Chris Rogers is the deer manager on the 10,500-acre Euston Estate in Suffolk. He is responsible for managing the estate’s red, roe, fallow, Chinese water deer and muntjac population and as a brand ambassador for Rigby he shoots a .275 Rigby Highland Stalker. In this latest campfire blog Chris recalls his experience shooting three deer species in one morning on the estate – a challenge he calls the “Mac Euston”.

It’s not often I get to stalk on my own as I’m usually taking clients out on the estate, so on a free Monday morning at the start of January, I headed out with my Rigby in hand, mainly for a look about but also on the off-chance of shooting fallow that are occasionally seen in this location. Failing that I would take a roe doe as we had a few left to cull in the area.

In a field near the boundary of the estate, I scanned for fallow in the gloom. It was still pretty dark but any lighter and the fallow would have crossed back over the boundary and my brief chance would be gone.

I edged up a belt of pine trees towards a small spinney which stood out from the belt, with the farm track running between the two. A dark shadow of a large deer crossed over the track and I stood for a second trying to identify what I had just seen. Another crossed, followed by another, and as they were heading out into the field, I knew that after 150m they would be into the boundary. I dashed out into the open to give myself a chance of a shot, if I needed to take one.

The deer had passed behind the spinney, so this gave me time to get into position and set up the rifle up on my quad sticks. A few seconds later the deer came back into view. As they were out in the open and the light had improved a little, I could clearly see they were red deer – three good sized spikers, both in body and antler, so I decided to hold off taking them. With that decision made, a couple more moved across, followed by three older animals, still young stags with the oldest of them being around five years old. They were all fine beasts but again there was no need to take any, so I watched them through the scope.

I was about to move on, as the more time I spent watching the reds would reduce the chances of a fallow in another area. Just at that moment a couple more red deer moved out from behind the spinney, two spikers but the last one was noticeably smaller in body than the others I had seen. He had snapped his antlers sparing with other stags but although this isn’t a major issue for antler growth, I made the quick decision to take him while I had the opportunity.

His companions were in better shape than him and although he was still a fit animal, with a cull target to achieve he was a good one to take. The reds were unaware of my presence with the wind in my favour, I waited for the spiker to stand in a good position before the shot rang out.

The deer jumped up and kicked out with his back legs, in textbook heart/lung shot fashion. The group turned and ran back behind the spinney. I waited a couple of minutes, still on the sticks and watched as the remaining red deer moved slowly on towards the boundary. A couple of the spikers kept stopping and looking back, so I felt sure that my chosen beast lay behind the spinney.

A few more minutes passed and the deer had moved out of view. I started towards the shot site and stalked slowly round the back of the spinney, where the yearling red lay. In total the red had only gone some 40m with the 140-grain .275 round passing squarely though its lungs. Although this was the smallest bodied deer of the group it was still in good condition. It never ceases to amaze me how big they are, and that we have these majestic deer running free in southern England with all the roads, villages and towns that surround us. 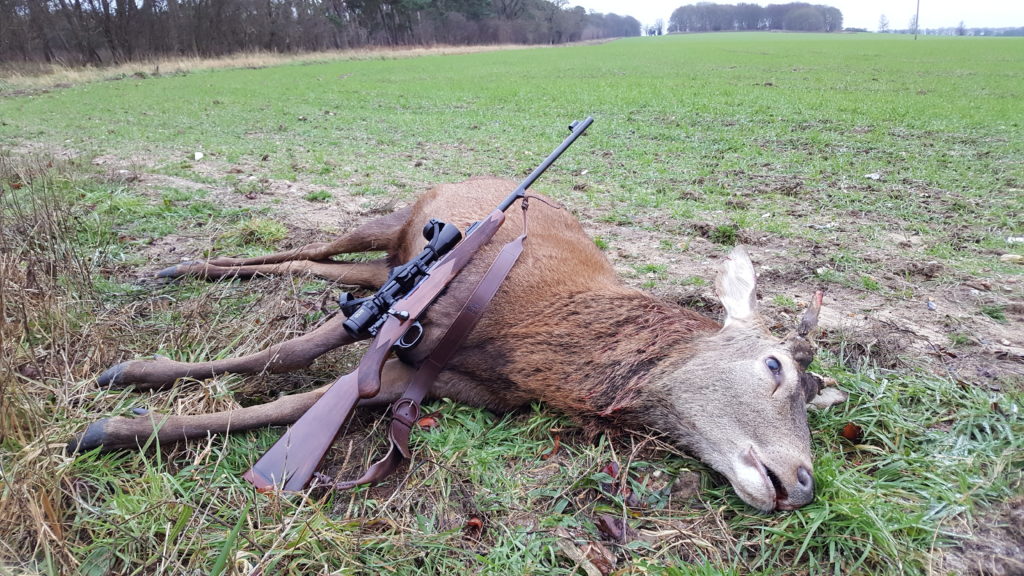 I considered calling it a morning and heading back for the trailer, but the deer had kindly fallen on a grass margin, so for once the extraction would be fairly easy. As I had shot him so early I decided to press on and drop over the next hill (a hill for East Anglia which others might call a slight rise in the ground) and look for a fallow around a block of maize game cover.

The light was well up by the time I reached it and as such I was fairly sure that any fallow feeding there during the night would have gone. I approached the maize trough another thin belt of pines, but a clatter of spooked pheasants greeted me. Cursing under my breath I scanned the edge of the maize but saw nothing.

The maize had a scrubby area to one side with long grass, small trees and dead nettles dotted about it. I watched a couple of hare move through this area, when I caught sight of a muntjac heading towards the maize. I quickly mounted the rifle on the sticks, gave a shout which stopped the young buck in his tracks and took the shot. As most muntjac do when they are hit well in the chest, it dropped on the spot. I wandered over to see the exact opposite in terms of size compared to the red I had already shot. 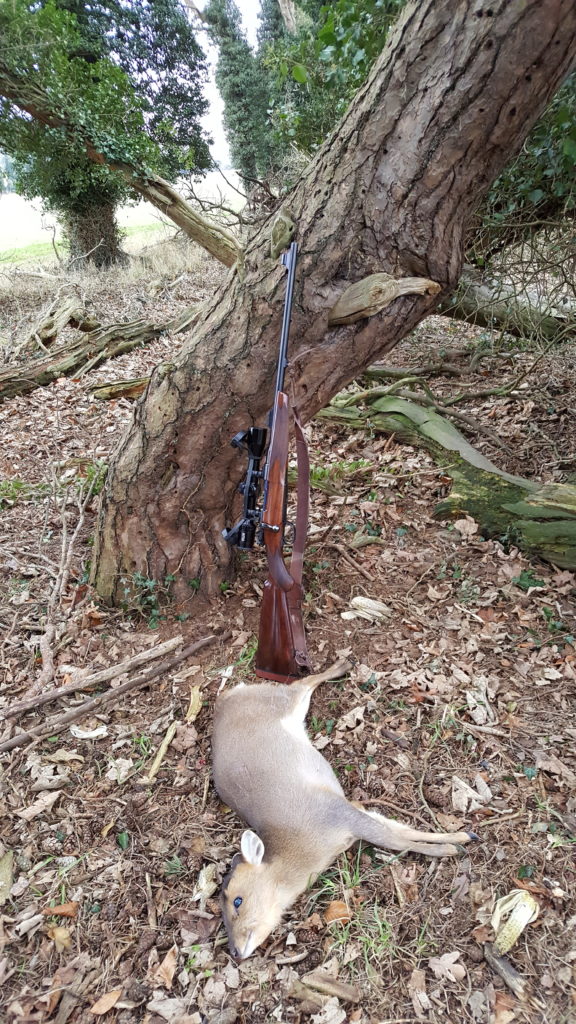 I decided to start back to the truck with two deer down – one of the largest and one of the smallest deer species the UK, not a bad effort for an planned morning. We sell an occasional day on the estate called a “Mac Euston”, where clients try to cull a red, roe and muntjac all in one day. Although we only do one of these per month throughout the winter, over the last 13 years we have only completed several of these.

As I walked back I tried to remember if I had ever done one myself, but I couldn’t remember ever doing so. I’d seen no roe deer on the outing and this seemed to be Sod’s law considering the number we would usually see and especially as I had gone out trying to find a roe or fallow in the first place.

I wandered down a track along the pine belt which took me back to the spinney where the red deer lay. I wasn’t stalking at this point, just ambling along thinking of whatever popped into my head when something prompted me to stop. I lifted my binoculars and some 200m down the track, coming out of the pine belt was five roe deer. They crossed the track and started to feed no more than 30m away from where the red deer lay. This was an opportunity not to be passed up, but the odds were against me. The wind had been correct for the red earlier, but was now wrong for the roe and I was standing in the middle of a track on the open. The pine belt was too thick and noisy for me to move into and I was sure that when the roe spotted the red carcass the jig would be up.

I decided that my best option was to crack on, so I walked down the track trying to close the distance to at least 150m. I’d only taken a couple of steps and the old doe in the group spotted the red. Her head went up and I froze. She was fixated on the red as were the others, so I pushed on while they were distracted. Using my Leica rangefinding binoculars I’d already given myself a spot which I wanted to reach as a minimum to take then shot, and I was still some 20m short of it.

The old doe started to move back towards the pine belt and the others in the group followed suit in single file. With the opportunity closing fast I dashed the last 10m to reach the 150m mark and set up the rifle. Only two deer remained in view with the others already into the belt. A buck kid and a doe, I found the doe in the scope and squeezed the trigger. The two deer ran in and the dreaded feeling of missing started to creep into my mind. It had been a rushed shot. I waited a few minutes before curiosity got the better of me and I headed down to where the doe had stood. A wave of relief came over me when nearing the spot I saw a good puff of hair and some chunks of lung. I followed the trail into the belt and 40m inside I found my doe. 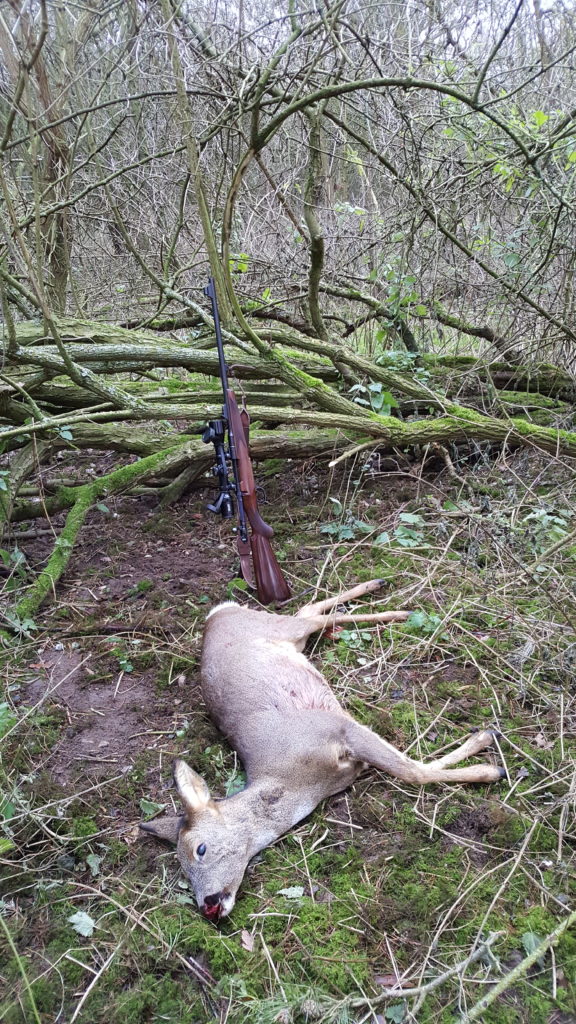 What a great morning it had been, the first time I can remember personally taking three species of deer in a day, in the 13 years I’ve worked on the estate, not only that but it was a very fitting first outing for the Rigby Highland Stalker in 2018. If I didn’t have a client coming that afternoon I would have tried again for a fallow or driven up to our Chinese water deer area to see if I could get four species.

The rifle and calibre performed perfectly. Meat damage was low on the roe and red and the smaller muntjac was no worse off than shooting him with any other .240 plus calibre. It seems to me in a world of wildcat calibres and the latest synthetic/thumbhole creation, the trusty .275 Rigby with its historic-looking stock design can still cut the mustard, one calibre and rifle to cull them all.

If you’re interested in stalking trophy and cull deer or trying for a “Mac Euston” with Chris Rogers on Euston Estate email, eustondeerhunting@yahoo.co.uk or call him on +44 7950 455 679. 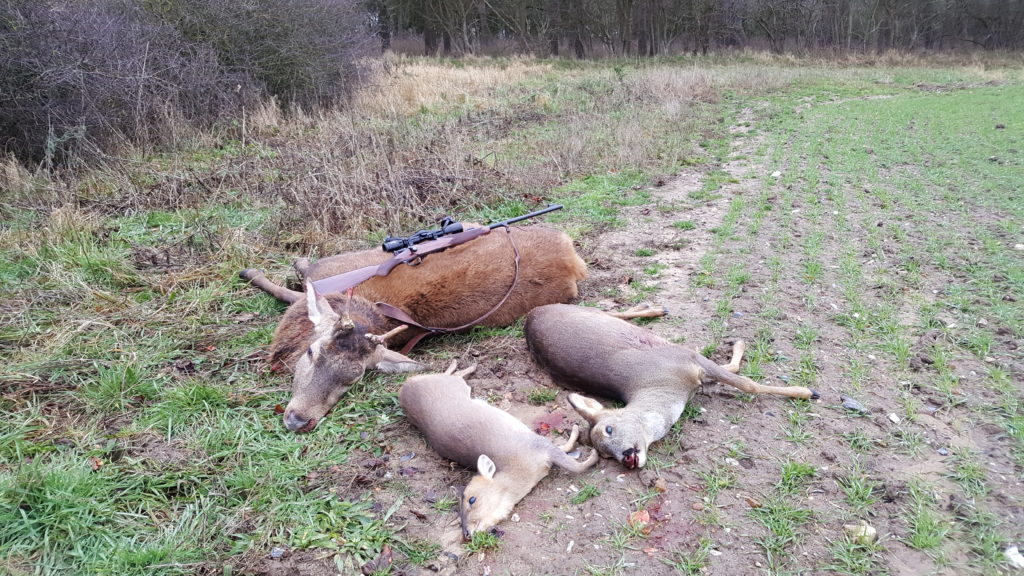