The Essence of Perfection – an old Rigby in Alaska 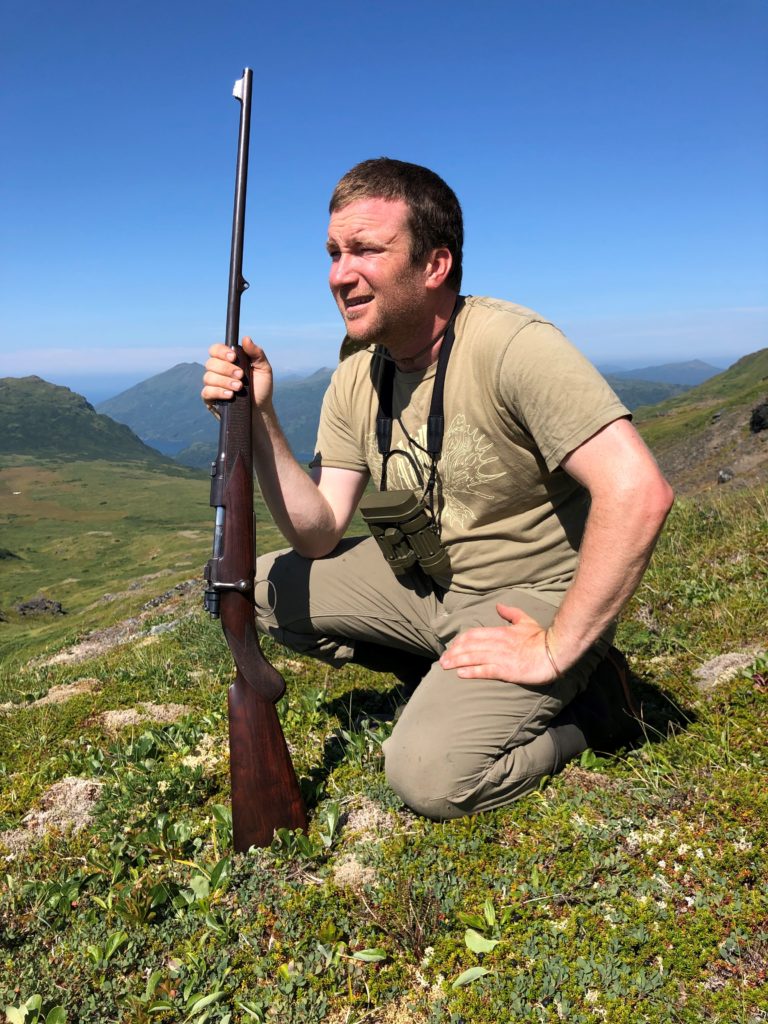 A 120-year-old Rigby has recently resurfaced in the Alaskan wilderness and is looking forward to some spectacular 21st century adventures. Its new lease of life comes thanks to hunting guides Taj and Phil Shoemaker of Grizzly Skins of Alaska, both of whom have a long-standing love of classic firearms.

“I picked it up from a friend here locally in Kodiak, Alaska,” explains Taj. “I do not know the history before that, but the rifle did come with a letter from Rigby.

“It is a Model no. 1 built in 1903. The bore on this rifle is worn to the point it no longer shoots the heavy bullets it was sighted for well. Luckily, the sights are right on for 139 or 140 grain bullets that will still stabilize in the worn bore well enough for hunting accuracy. I’ve carried it in the field on a few occasions. The only animal I have taken with it was a small Sitka Blacktail deer for meat. It also happened to be the first hunt I ever took my daughter on. This rifle will be passed along to my daughter when she is old enough. If she has no interest in hunting with it, then it may be sold to pay for higher education. A vintage Rigby appreciates better than most commodities.” 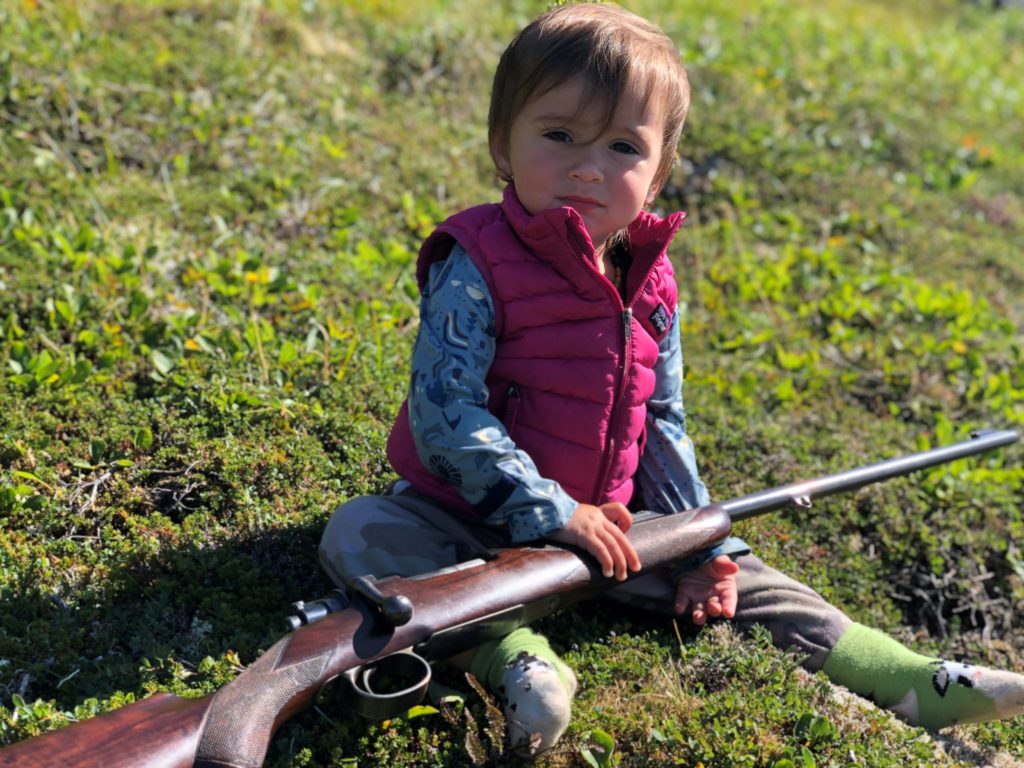 Taj is no stranger to vintage Rigbys: “My first familiarization with Rigby rifles was in Zambia, where I used an original .416 that belonged to Adrian Carr, my employer. Adrian had received the rifle from his father, Norman, and between the two of them it had killed over 1,000 bull elephants. Vintage Rigby rifles were still highly prized as high-quality tools there.”

Following his experiences in Africa, Taj quickly came to share this view: “In my opinion, Rigbys are the pinnacle of fine rifles – not always in an artistic sense – but as tools that are meant to be used. My 1903 .275 is a good example. It has no embellishments beyond a gold inlaid ‘SAFE’ on the safety and a silver or platinum line in the middle of the V rear sight. Both are more practical than an embellishment as the precious metal is still highly visible in good or low light and will never tarnish.

“The stock is of a plainer grade wood, dark with not a lot of figure. This is a good thing as it is obviously a high-quality and dense piece with straight grain. After all these years of use it has held up well; it has no cracks and still holds zero – and the rifle has been used plenty. The bluing has been replaced by the dull shine of well rust-blued metal that has been worn and cleaned 1,000 times. Even in costal Alaska the metal does not rust quickly due to this natural protection. A new rifle can turn red with rust overnight here, while this rifle will not show it. The stock does not swell or shrink with moisture or temperature due to the fine-grained wood, a good oil finish and years of oil soaking in.” 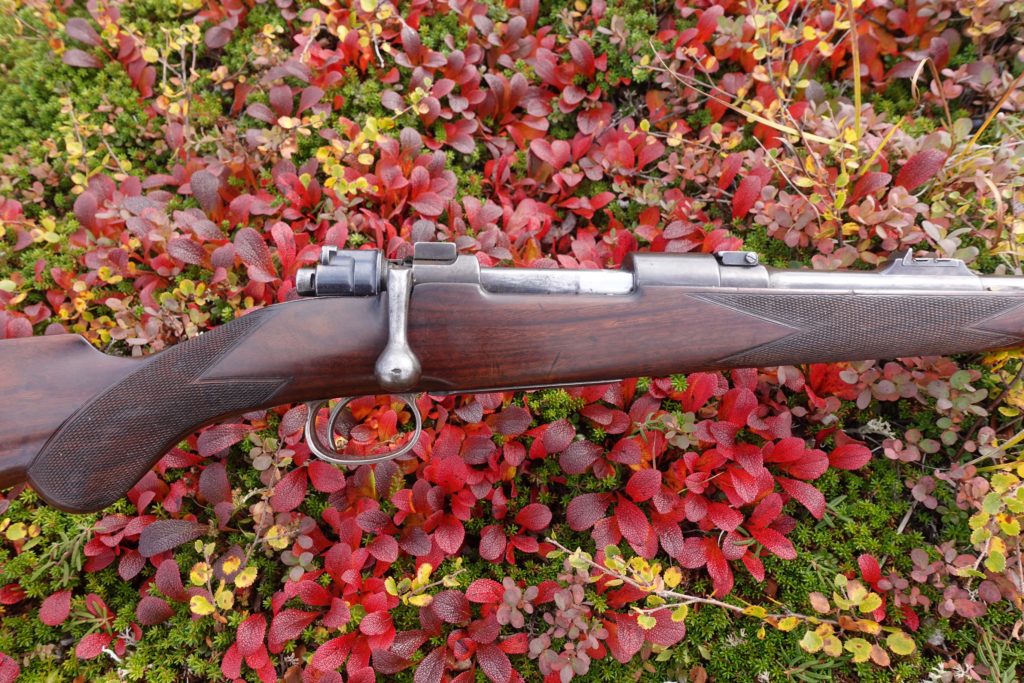 Taj assigns much of this practical brilliance to the third John Rigby (1829 – 1916): “I find it quite apparent that John Rigby was a user of rifles, not just a maker. The essential aspect of these early Rigby rifles that make them so appealing is their spartan nature. The stocks are minimalist, but not excessively so. Only the finest quality components were used, as evidenced by the fact that these rifles are still state-of-the-art after 100 years. There is no excess in the rifles at all; everything is well thought out and made for use. When I pick up any original Rigby it screams to me of being the best rifle for its intended purpose. There is no one thing that makes a Rigby better than its contemporaries or successors to me. Rather it’s the combination of small – almost imperceptible – attention to detail in each aspect of the rifle that makes it so.”

For Taj’s father Phil, an Alaskan master hunting guide with more than 40 years’ experience, it represents an exciting first: “I have been a student, and serious user, of firearms all my life. I have also been a staff writer and technical advisor for various publications for most of that time,” he explains. “I have owned and hunted with many finely built older European and American rifles, both factory and custom built, but this is my first Rigby.

“I am always happy and willing to try new rifle. I plan on using this Rigby later this season during our winter caribou and deer season and allowing it to share space in my gun rack next to my 1903 Wundhammer 30-06. Having carried other vintage rifles, I realise that wood stocks and blued steel require a slight bit of extra attention in wet conditions – especially around salt water – but modern lubricants do a remarkable job of protecting the metal work and rubbing in a little additional stock oil after the hunt is a pleasure.

“As Taj says, Rigby earned a Sterling reputation among serious hunters for numerous reasons. These rifles were obviously designed by, and for, hunters who carried them on a daily basis and they were built from the best available materials. The final fit, finish and balance of pre-war English firearms is legendary. Unlike so many of their competitors, however, Rigby rifles embody a simple, understated elegance devoid of all excess. Those traits are as endearing and desirable today as they were a century ago.

“As I was walking back to the homestead one evening recently after being out looking for caribou, I realised the beauty of this old Rigby is that it has no cheek piece or convoluted carving, it epitomises the old axiom that simplicity is the essence of perfection.”