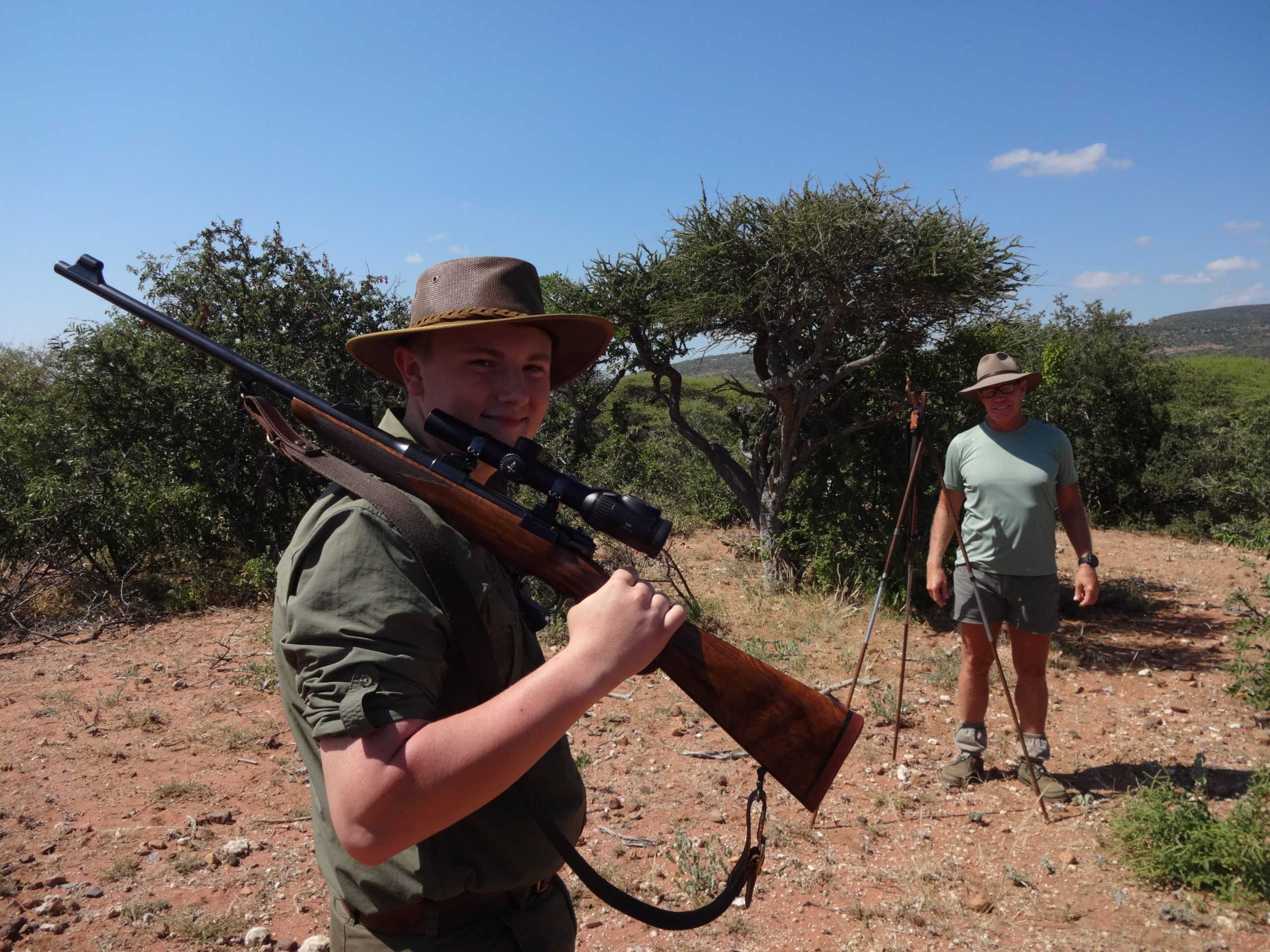 When Suffolk teenager Joe Carter was on his way to London with his parents to celebrate his 17th birthday, he knew he was going out for dinner followed by a visit to the Rigby workshop. What he didn’t know was that he would be receiving a Highland Stalker rifle chambered in 9.3×62 as a present. It was a special gift for a special young man who understands the Rigby story and is now very much part of it himself. Here, he explains how much it means to own a Highland Stalker and how much he enjoyed using it on his first African safari adventure…

I remember very clearly walking into the John Rigby & Co. workshop at Pensbury Place in London. We had been out for dinner in London to celebrate my birthday and we also had a visit to the Rigby workshop planned. I knew that much. But as far as I was concerned we were going there just to have a look and find out more about what exactly they do inside this most prestigious of gunmakers. I certainly didn’t have the slightest inkling that I was about to be presented with a Rigby Highland Stalker as a birthday present. 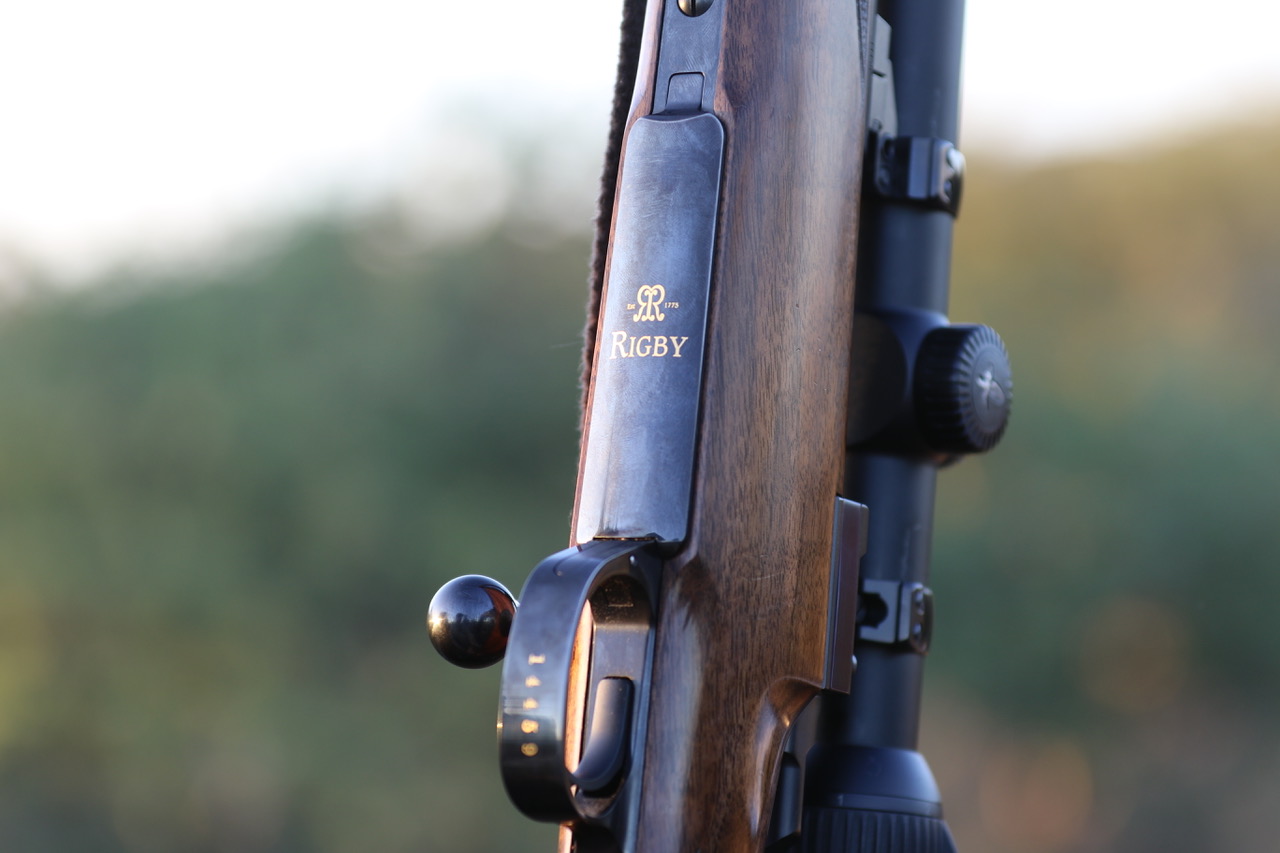 Shooting is something I’ve been very interested in from a very early age. I already own a .275 Rigby rifle, which I use in this country. It’s a special gun, handed down to me by my father.

My father has done a lot of hunting throughout his life. He’s been round the world shooting, and he’s done a lot in this country too. He’s taken lots of people out with him over the years and has introduced me to the joy and adventure of the sport as I’ve grown up. I’m very proud to be following in his footsteps. 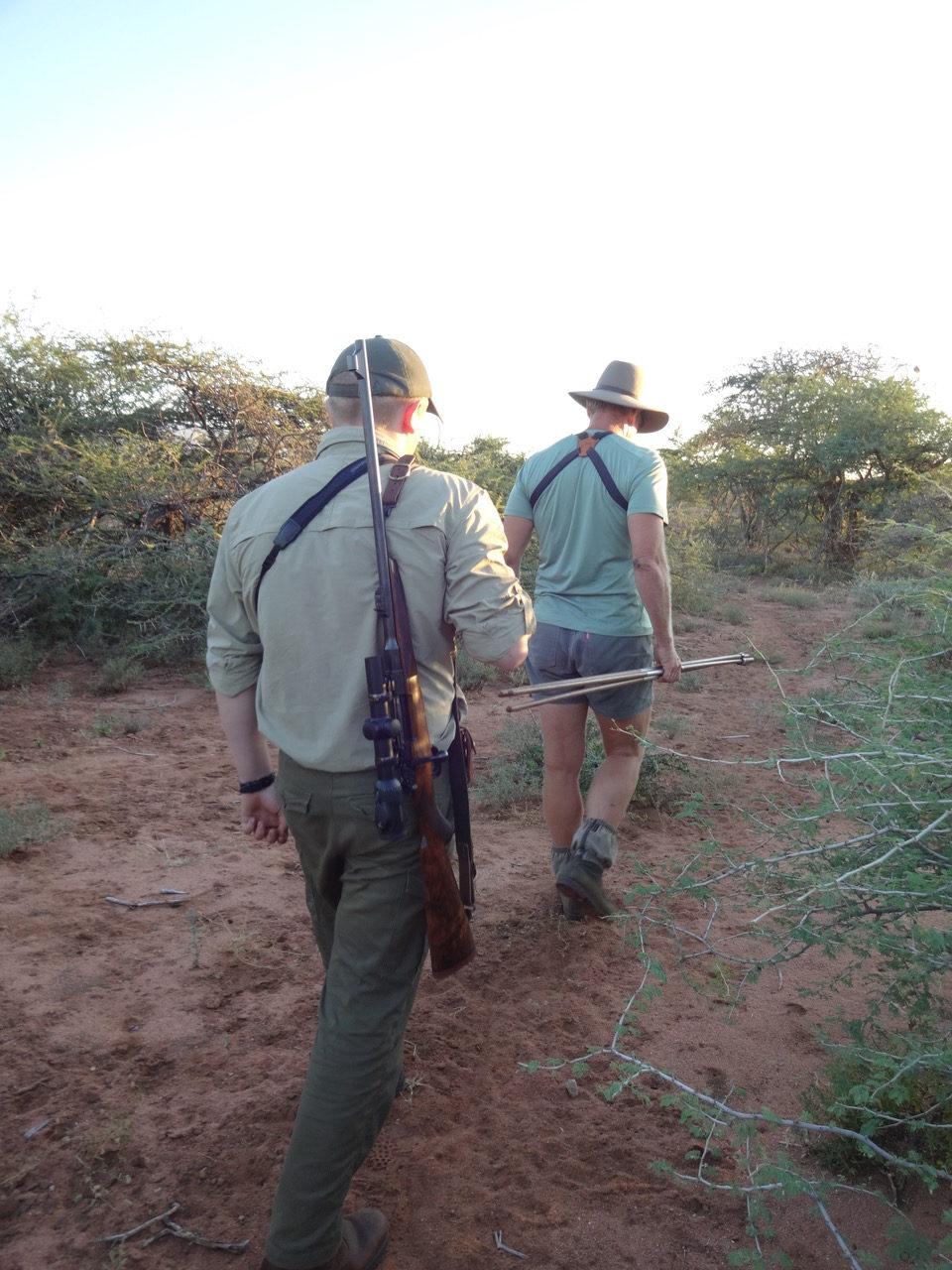 I’ve done a lot of shooting with my father locally over the years – out and about in Suffolk deer hunting, shooting Chinese water deer in particular. However the reason my parents gifted me a larger calibre Highland Stalker rifle chambered in 9.3×62 was a safari trip to South Africa that unbeknown to me, my father had planned. That was the other big surprise. My father’s generosity didn’t stop at a brand new Highland Stalker rifle. Hs also told me that he would be taking me and my new rifle on my first-ever safari. We were off to the Limpopo region of South Africa to hunt plains game. Presents really don’t get any better than that.

My parents explained that the gun itself was an early 21st birthday present. I was overwhelmed by such a generous gift and couldn’t wait to start creating my own history with this finest of hunting tools.

When presented with the rifle together with a Union flag inside the Rigby workshop, it was a special, unforgettable moment. I really was lost for words when that happened. In fact, the whole experience of being made so welcome at the workshop, watching and speaking to the gunmakers, was out of this world. 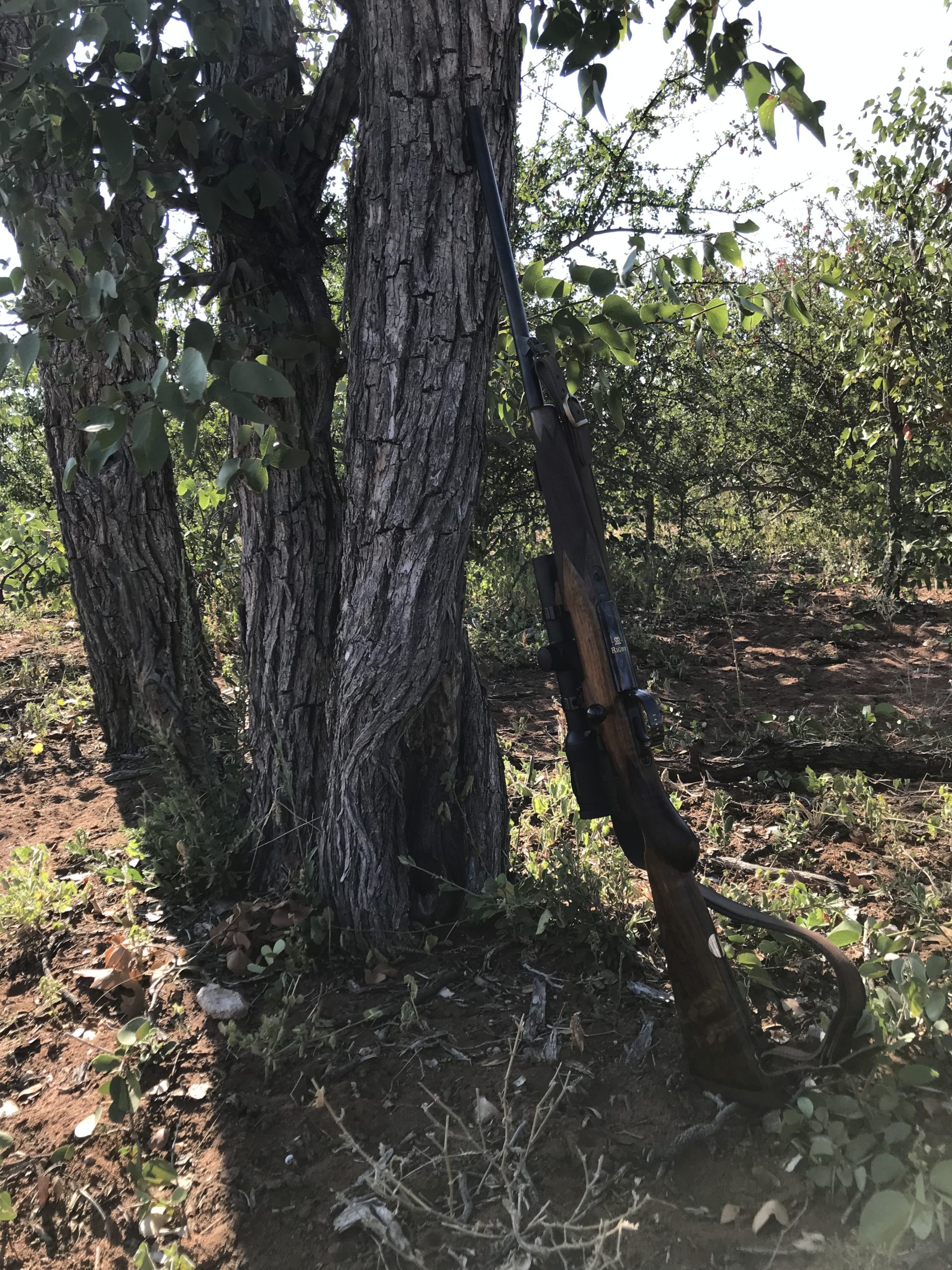 As I was shown behind the scenes it really struck me how hospitable and kind the team were. That’s one of the special things about Rigby. They explained that Rigby owners are part of the Rigby family for ever, and I could really feel the connection and warmth.

The workshop itself was a real eye-opener. I saw how a shotgun is made, how a rifle is made, stocks being shaped, engravings being done, the full works.

Seeing all the history, all the historical guns they have in there over the years, was really mind blowing. It was very special being able to see the completed gun and witness the process from start to finish. Rigby rifles are made by skilled craftsmen, producing one of the finest guns in the world, and it was so fascinating to see it all being done. 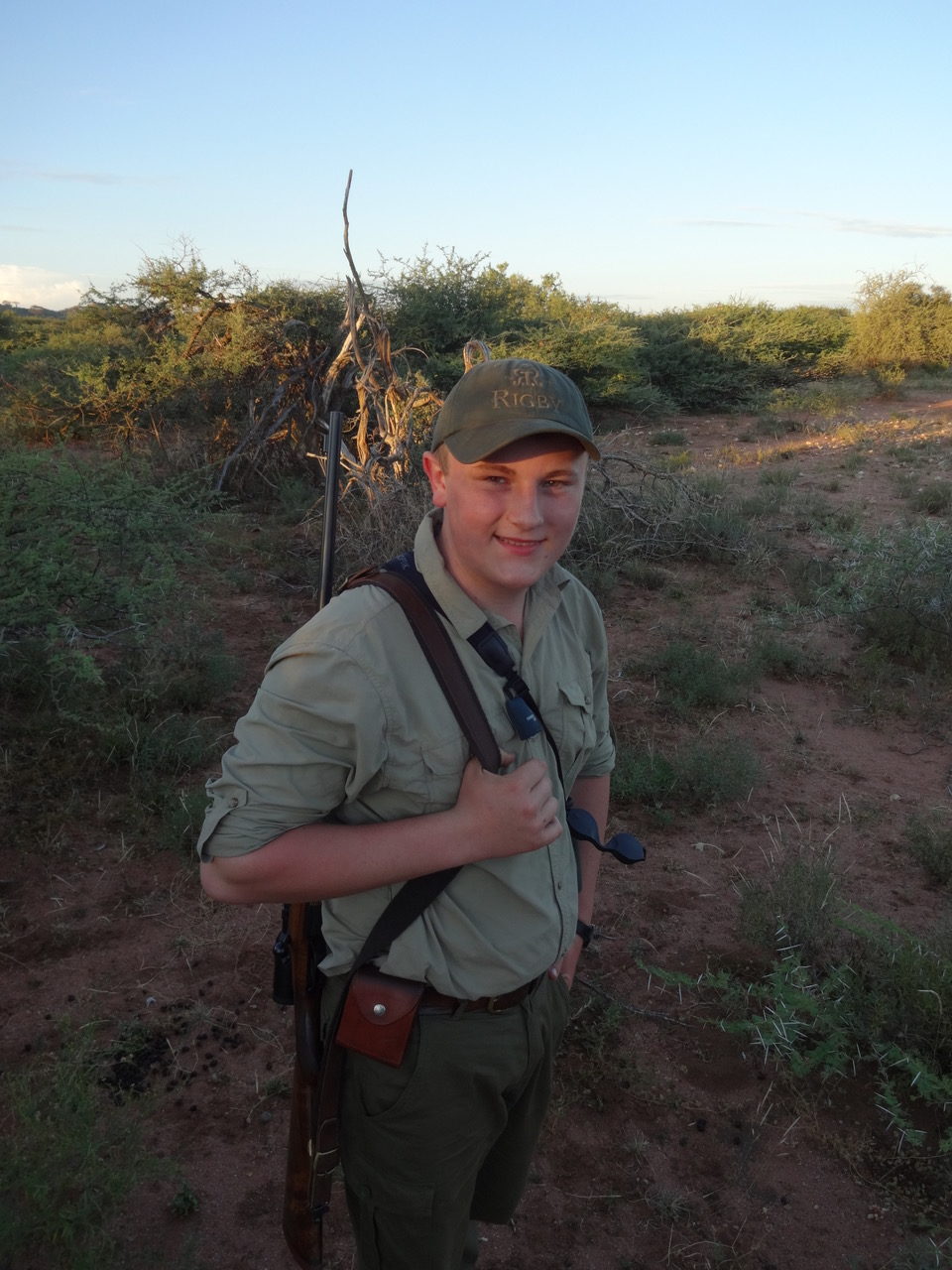 It’s amazing to now own two Rigby rifles and I’m fully aware of how lucky I am, at my age especially, to own two Rigby rifles. When asked to explain what it feels like to be the owner of two fine Rigby rifles, it’s very hard to put it into words and all I can say is it is a real privilege.

I’ve also experienced something most 17 year olds around the world will not get to experience; hunting in Africa with my very own Rigby rifle. I’m very honoured.

I was so moved by the experience in the workshop that day, and on my subsequent safari with my father in South Africa, that I felt obliged to write a letter to John Rigby & Co. to say thank you. Andrew Ambrose, Rigby’s head of sales, wrote back to say that it was also a special day for the Rigby team to see one of their rifles going to a good home; going to someone who genuinely understands what Rigby and ethical hunting is all about. That message meant a lot to me. 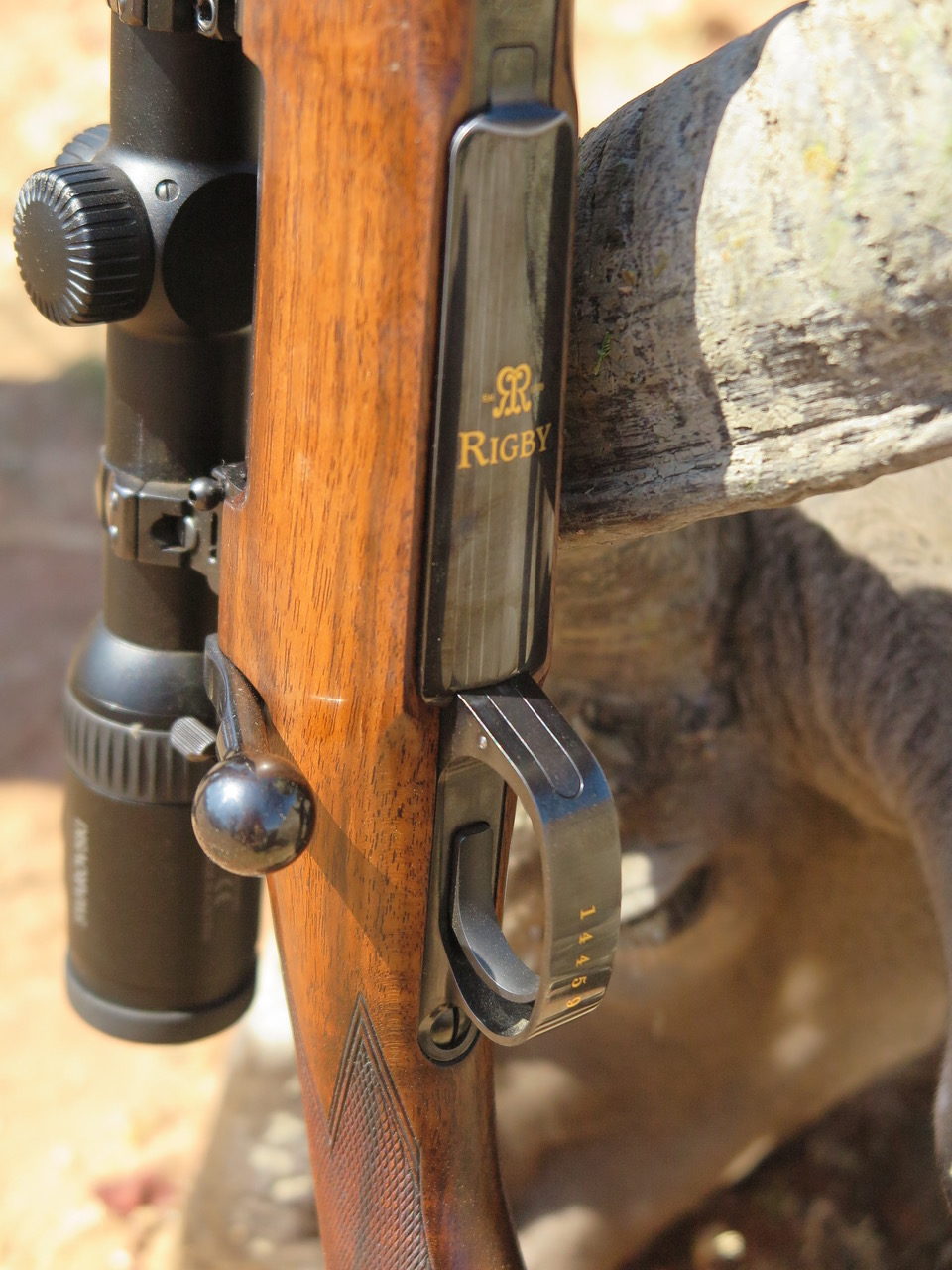 Rigby’s history and story is inspirational. Being associated with the history makes using the rifles even more pleasurable. In fact, ever since I started using the .275 Rigby that my father handed down to me at an early age, I’ve been hooked on the brand. The stock design is stunning, and the Mauser action is incredible. Rigby has always been my go-to gun.

So, the opportunity to bring my Highland Stalker rifle chambered in 9.3×62 on a safari in South Africa was one that couldn’t come quickly enough. Throughout the whole adventure, the gun preformed tremendously, and never let me down on a single shot.

The rifle was a hot topic most nights over the campfire. As we re-lived each day, it was quite common to find ourselves talking about the overwhelming beauty of the rife, and how well it fitted in with the surroundings of Africa. I was often asked by our guides to grab the rifle and pass it over as they wanted to look at the craftsmanship that had gone into building the gun.

In the short time that I have owned this rifle I have already had the opportunity to create many memories. One of these has been the opportunity to hunt for a cull Kudu bull. The day was hot and dusty, but this didn’t stop the Highland Stalker from helping me take my first kudu – a 51-inch bull. It was a tremendous experience to have the opportunity to stalk such a majestic animal and finish with a successful outcome.

It was one of many opportunities I had in Africa to really put the rife to the test. It never let me down. I successfully hunted wildebeest bulls and cows as well as impala ewes, rams and other plains game. Throughout the safari I couldn’t help taking pictures of my trusted companion, the images revolving around the distinctive ‘double R’ logo on the drop plate. The rifle was absolutely faultless on that trip of a lifetime.

Later this year I’m going to Serbia with my father to shoot red deer, hinds and wild boar. I’ll hopefully also take the gun back to Africa before the year is out and continue to make history with it out there. 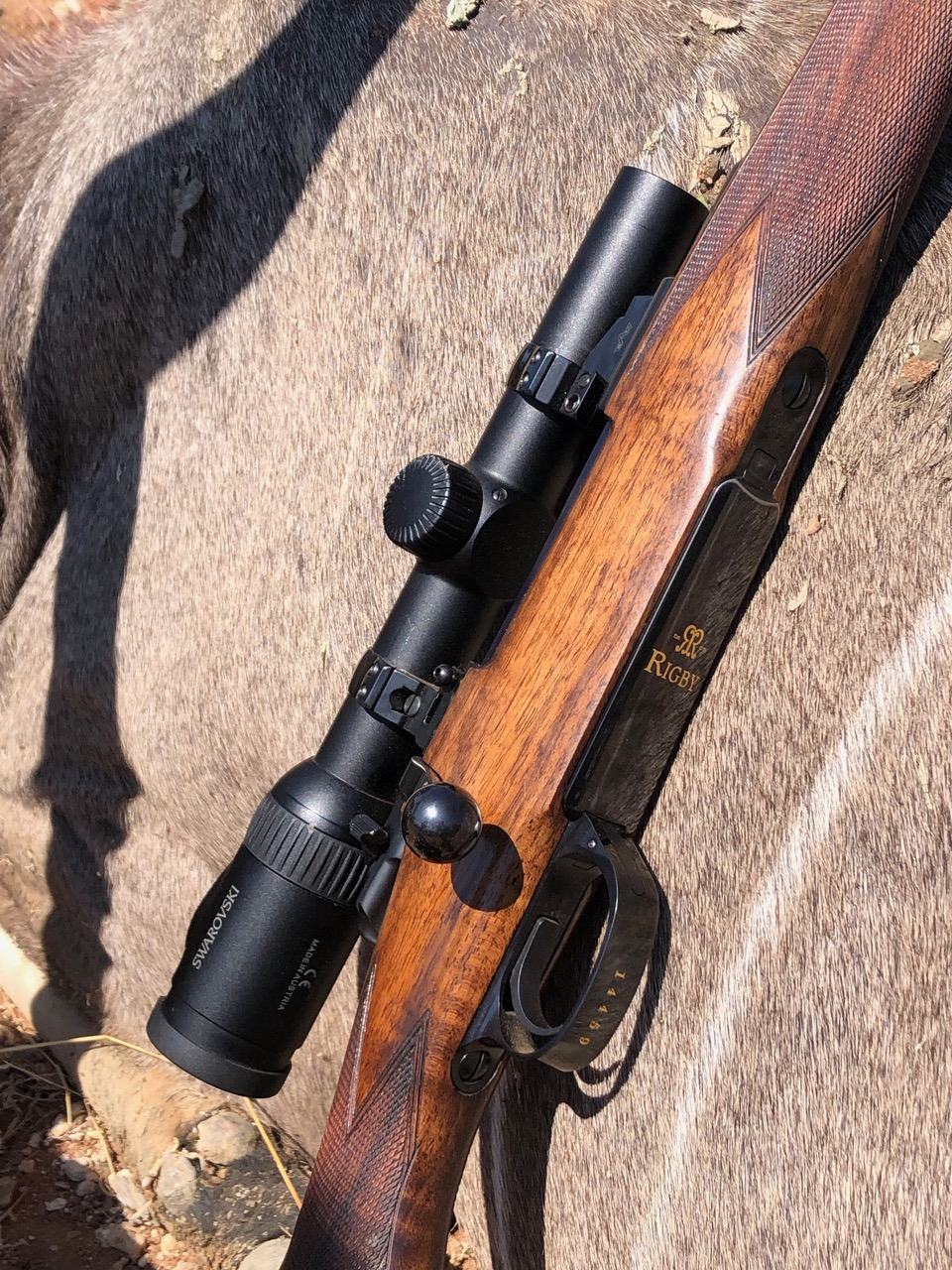 I would like to congratulate Rigby for manufacturing such an outstanding rifle that will stay with me for a lifetime and many others. This rifle will continue to be one of my most prized possessions, something which I will continue to make memories with.

I’d like to think I’ll have this bigger calibre rifle for the rest of my life, take it to lots of new places on an adventure and then pass it on. This rifle is built with such quality that it will last a lifetime and one day I’d like to pass it down through the next generation of my family. That way, they’d be in the Rigby family too.