When you buy a new British gun, you actually buy an old British gun, made recently. Every major maker still in business is selling products developed from patents dating back to the reign of Queen Victoria. Fortunately, the reason for this is because the designs of the Victorian inventors were extremely good.

The best British designs have never been bettered, only manufacturing cost and time-saving developments have been influential in the success of later types of shotgun. Enter Rigby. Rigby has grown from a small team, under managing director Marc Newton, to a serious player. In fact, Rigby now makes more sporting rifles than any other London gunmaker. Let that sink in for a moment.

The Rigby policy has focused very much on re-imagining classic models from the firm’s back catalogue. The Big Game and Highland Stalker models re-visited the hugely successful Rigby-Mauser rifles of the first quarter of the 20th century for inspiration and became the gentleman’s rifle of the modern era.

Building on the success of their bolt-action rifles, the Rigby team then embarked on a more ambitious project; resurrecting the double rifle for dangerous game with the iconic vertical-bolt side-lock action patented by John Rigby and Thomas Bissell in 1879.

To give that some historical perspective, 1879 was the year in which British forces under Lord Chelmsford were decimated at Isandlwana by Cetchweyo’s Zulu impis. Around the same time, Henry Morton Stanley was fighting his way through the Congo to rescue Emin Pasha and Thomas Edison was preparing to demonstrate the first workable light bulb. The world was a very different place. That gun patents dating back this far are still being launched as new models in London is a mark of their cleverness and utility.

Given the success of their rifle projects, it was only a matter of time before the shooting public expected to see a new Rigby shotgun emerge from Rigby’s workshop – and last year that day came. The new shotgun mirrors their double rifle, in being built around the Rigby & Bissell action.

The action is inherently very strong, with a traditional Purdey patent double under-bolt holding the barrels on the face from below, by way of bites in the two lumps. Additionally, the vertical bolt rises from the top of the action and locks into a bite in a top rib extension, providing a third anchor point.

Aesthetically, Rigby has stuck to the original bar action lock-plate with dipped edges. It is so distinctive that anyone with a modicum of knowledge will recognise it as a Rigby immediately. Part of buying into the family of Rigby ownership is the distinction it provides. 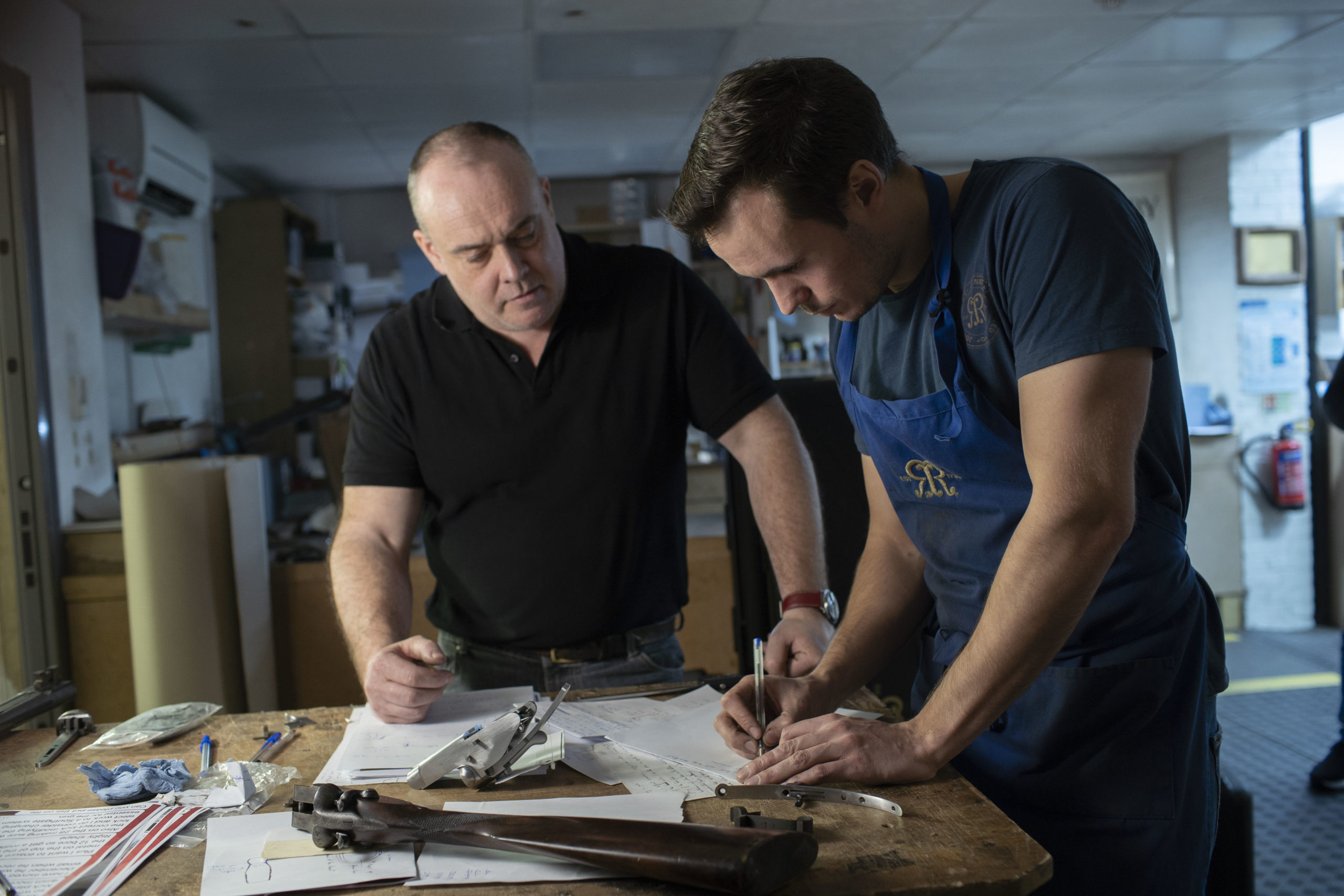 Rigbys are not like other guns. The Rising Bite really has the look of the era in which it emerged. The early 1880s was a period of variance. Every maker was building a style of gun they hoped would catch the public’s imagination and be blessed with general approval. In the two decades that followed the introduction of the Rising Bite action, a number of things happened that streamlined the look and mechanics of what became known as the London Pattern side-lock. Firstly, most makers dispensed with third grips for best shotguns. Rib extensions and machined recesses in the action are expensive to fit properly and it became apparent that for normal usage, a Purdey bolt alone was sufficient. Some argued that third grips were unsightly and the protruding rib extension was an impediment to rapid loading. For many, the crucial factor was cost.

The other stylistic feature which became the norm, as the 19th century waned, was the stocked to the fences look of the Purdey and the second pattern Holland & Holland ‘Royal’. This means the wood from the horns extends right up to the fences, without the shoulders that actions like the earlier Boss, Grant and Rigby guns feature.

There is also the matter of the dipped-edge lock plate. It is a distinctive feature that dates back to early models like the Gibbs & Pitt, and the first model Holland & Holland ‘Royal’. The dipped-edge plates of the Rigby serve no particular purpose, but they are a recognisable house style, which Rigby decided to resurrect for the new gun.

After re-emerging early in 2019, the new Rigby Rising Bite shotgun is priced from £79,000 (excl. VAT) and is built in London, at the Pensbury Place factory. With dipped-edge lock plates, Rigby scroll engraving and the vertical-bolt action, it is immediately identifiable as a Rigby. 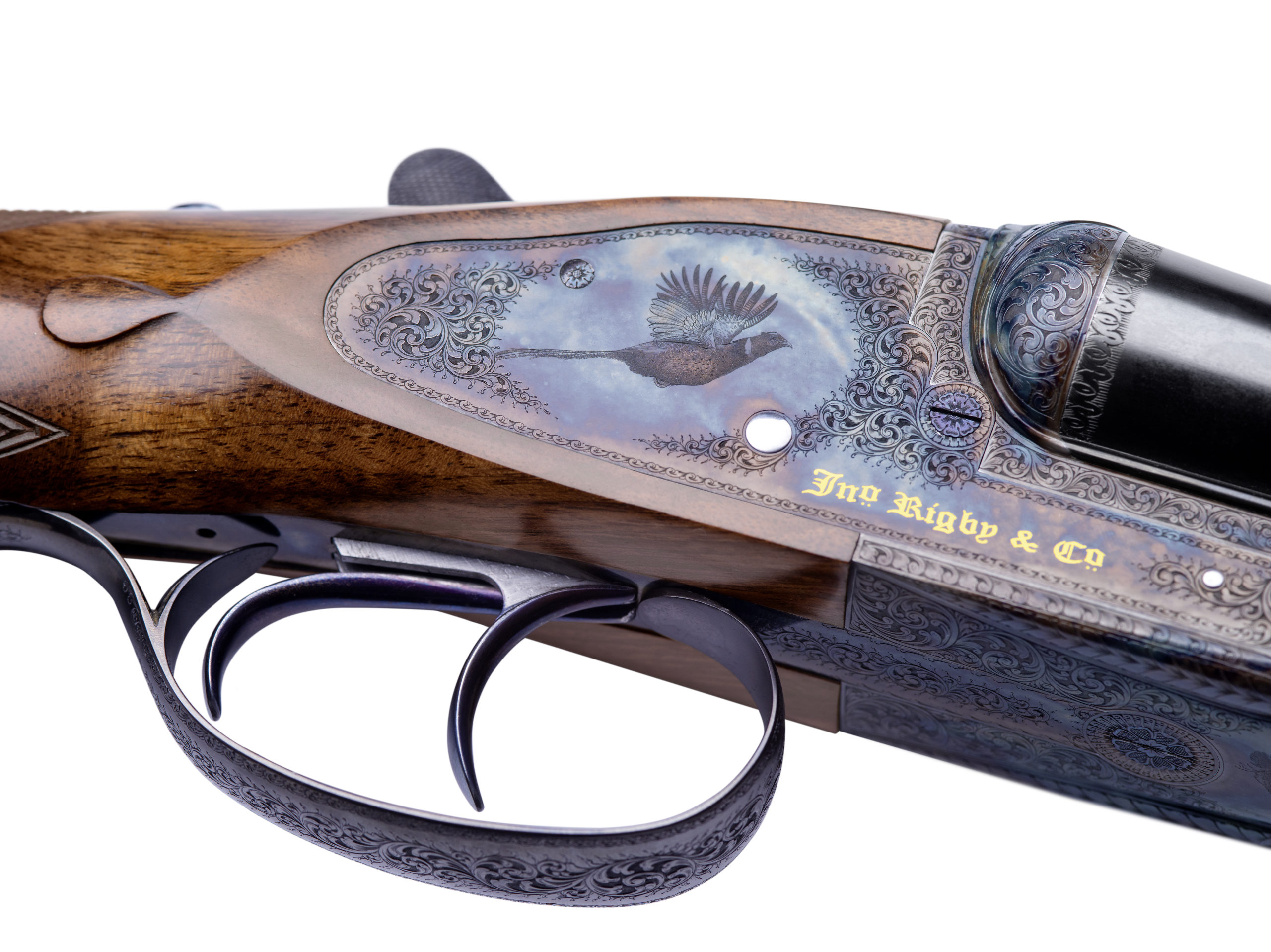 Rigby provide tradition, quality and classic rifle-building. For their shotguns, the same strategy is evident. If you buy Rigby, you want different, you want distinctive.

Modern production methods have been employed to produce the machined components. This is the way all shotgun production is going. Spark erosion and CNC machinery improves every year and we have now reached a level of sophistication that means for practical purposes, a working gun can be made entirely by machine. The best guns are made to fine tolerances and then hand finished at the final stage of fitting to achieve the traditional levels of perfection in every moving part and chain of mechanical interaction. Engraving, stocking and barrel making are unchanged, being carried out entirely at the bench, in the traditional manner. Finishing is to the best London standards.

For more information on the Rising Bite shotgun CLICK HERE. 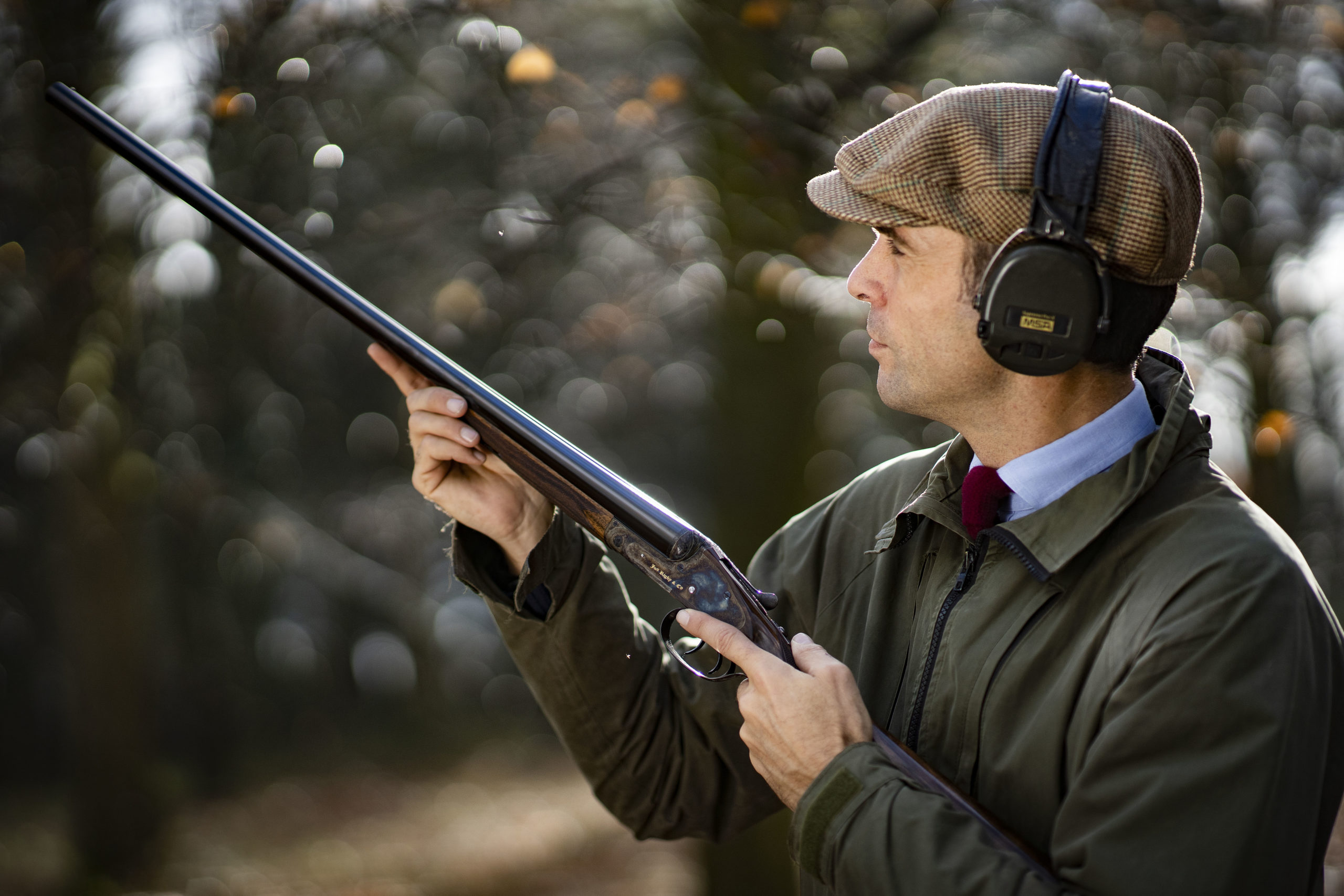