I was brought up on my parents’ ranch at Naivasha in Kenya on the lake’s shore which extended several thousand acres into the nearby Leleshwa Hills. The ranch teemed with wildlife: hippo; buffalo; East African eland; Coke’s hartebeest; Burchell’s zebra; Maasai bushbuck; and mountain reedbuck. The ranch was also home to a large number of leopard as well as the occasional vagrant lion and black rhino.

It was at the ranch that I learned to hunt, having been given a .22 Krico rifle by my father, a game warden, at the age of 9. This was soon upgraded to .303 P 14 rifle, and then later to a .404 Jeffrey which my father loaned to me to hunt buffalo, as long as I was accompanied by one of his experienced game scouts.

One of our neighbours at Naivasha was Jack Block, the owner of the famous Norfolk and New Stanley hotels in Nairobi and the chairman of Ker and Downey Safaris. His ranch, Longonot, was a large tract of African bush country of over 20,000 acres and full of wildlife, so much so that large numbers of big game were in direct competition for grazing with his pedigree Boran cattle. Knowing I was a keen hunter, Jack asked my mother if I would like to help tackle this overpopulation. I didn’t need to be asked twice! I had just turned 18 and had finished my last year at Kenya’s Duke of York School, so set aside two months to help. Soon I took up a position as an apprentice hunter with Ker and Downey Safaris and at the end of the year was granted my first restricted Professional Hunters Licence.

The Kenya Game Department had sanctioned a careful reduction of wildlife numbers at Longonot and I was told to go and see John Nazer, the general manager of Longonot, who was to furnish me with an estate rifle and ammunition.

Imagine my surprise when John opened the gun safe and handed me a .350 Rigby Magnum Square Bridge Mauser actioned rifle, two boxes of five 225 grain solid round nose bullets, and a dozen boxes of 225 gran soft nose bullets, made by Kynoch and loaded with cordite powder. The Rigby had a shallow ‘V’ fixed rear sight for shots of up to 100 yards and flip up leafs calibrated for 200 and 300 yards. The front sight was a small bead that nestled perfectly in the bottom of the ‘V’ when I picked and pointed the rifle. It also had a flip-up moon sight for dusk or night use. It was a take-down version, which allowed the removal of the barrel for travelling purposes.

Knowing how eager I was, John cautioned me not to shoot any buffalo with this rifle, but that the solid bullets were just in case I needed them. What he meant by ‘just in case’ I will never know, though at the time it seemed tongue in cheek and accompanied by a big smile. I took it to mean be careful, as there were old cantankerous bulls hiding in the ravines and bush. My main efforts were directed at the zebra, eland and Coke’s hartebeest populations, and to take on a calf killing leopard, if the opportunity presented itself. 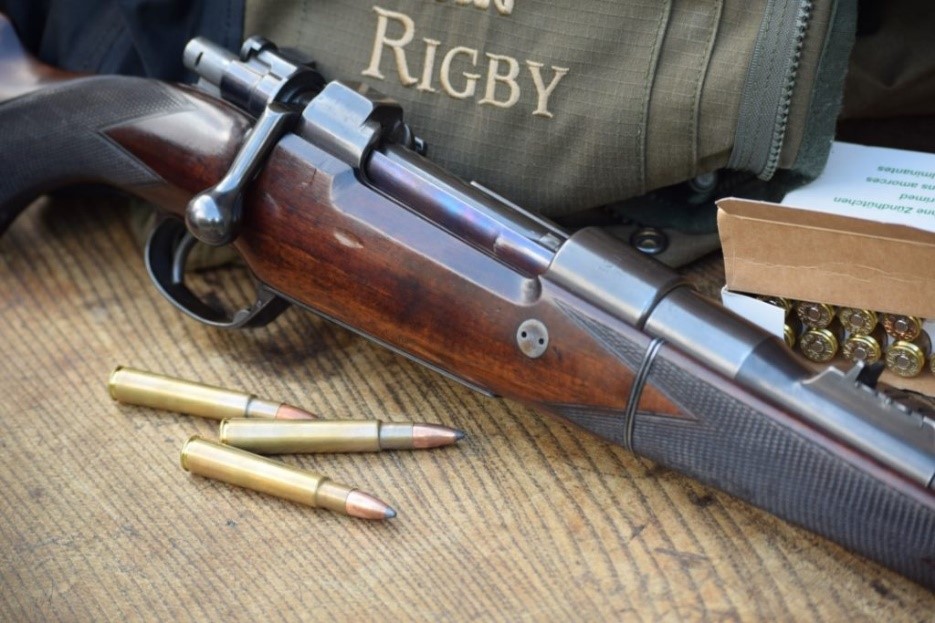 The .350 was a lovely rifle, easy to use with a perfect crisp trigger, it was deadly accurate, with both soft and solid bullets shooting precisely at the same point of aim. It had a turn over safety that locked both the action and trigger. I fell in love with it. Whenever we passed through thick cover where buffalo lurked, I would chamber a solid bullet ‘just in case’. That habit soon gotme out of a possible tough spot. My Maasai friend Tinea and I would hunt opportunistically on foot and soon had a reasonable tally of zebra. We also hunted some hartebeest and eland – though didn’t make much of a dent in their overall numbers.

The .350 was lethal. We had no wounded and lost animals, mostonly required one well-placed shot and only occasionally was a second follow up shot required. Having only open sights, I would only shoot at ranges I was comfortable with, mostly under 100 yards. Tinea and I became proficient stalkers out of necessity.

We did get the calf killer leopard when he made the mistake of returning to one of his kills. And yes, I did shoot an old buffalo bull with the .350. He stood glaring at us from 20 yards in a most threatening stance. I wasn’t about to find out his intentions! Just one shot with a solid bullet placed one third up in the middle of his massive chest was all it took. He ran 50 yards into thick Leleshwa bush and collapsed with a death rattle bellow. My younger brother Mike came with my mother in her car to see the buff and take some of the meat back to our farm. The rest of the meat was collected by the Longonot Farm tractor and trailer. Nothing we shot was ever wasted. 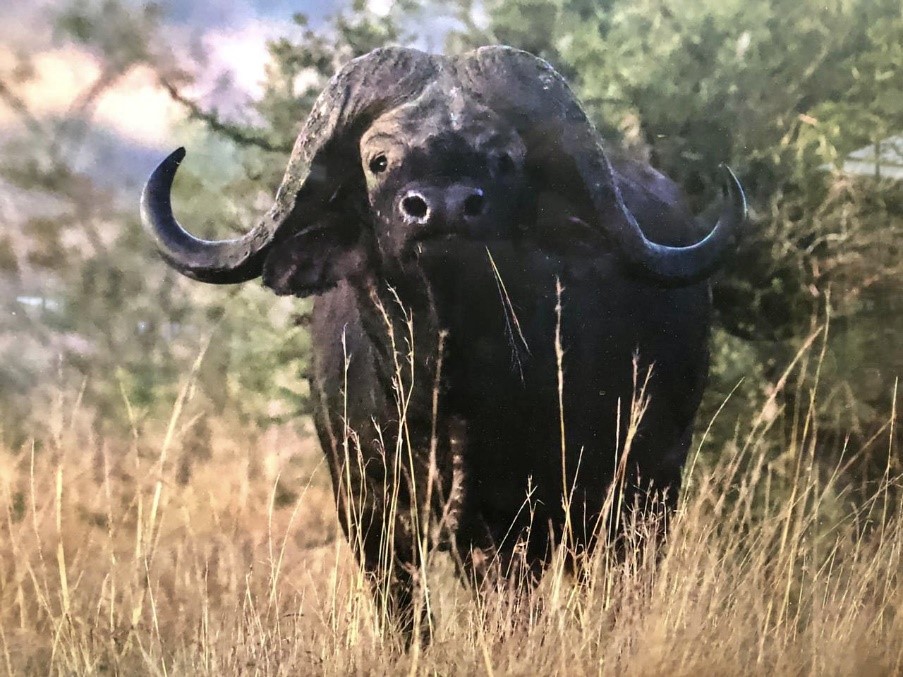 That was the only buffalo I shot with the .350. Would I do it again? In hindsight, with 58 years of a full-time professional hunting career behind me, the answer is unhesitatingly yes; providing I could make a careful shot and have the right bullets loaded to do the job, and providing it would be legal. Some countries have a minimum calibre size for use on buffalo, which is .375. This was the case in Kenya but was not enforced on private land.

Undoubtedly the .350 Rigby has accounted for numerous dangerous game animals over the years, including rhino. Additionally, there are those who hunted innumerable elephant with the .350 loaded with solids, used for both brain and heart shots. They included the famous ivory hunters ‘Karamoja’ Bell, Denys Finch-Hatton of Karen Blixen fame and Pete Pearson, the most successful of the intrepid Lado (Congo) elephant hunters. Would I recommend such a huge animal for this calibre? No! Though without a doubt in the right hands it’s more than possible. Just consider what Bell managed just using a .275 Rigby!

The only other large dangerous animal I shot with the .350 Rigby was a marauding bull hippo. This was on my mother’s farm. This hippo was frequently foraging in our Lucerne fields and trampling the aluminium irrigation pipes. I used to take the Rigby home with me each evening for safekeeping and would place it in the corner of my bedroom where it wouldn’t fall over. One night I heard some loud munching outside my bedroom window. In the moonlight I could see the bull hippo 30 yards away chomping my mother’s lawn. I loaded the .350 with a solid, raised the front moon sight and peered out of my bedroom window. I raised the rifle, took deliberate aim for his heart lung area, just behind the shoulder, and fired. At the shot he went crashing off and shortly after I heard him splashing about in the lake. In the morning we found him dead, in the shallows on the edge of the lake. This was a huge feast for our farm workers and us, and in some ways compensated for all the loss and aggravation caused to my mother.