What’s new or of note in the workshop this month?

The first falling block has just passed London proof. Working on this is so exciting – there’s something almost Victorian about it. You feel like you’re loading some sort of field gun on a battlefield when you open and close it. It’s a remarkable piece of engineering and so different to anything else we’ve done here so far. We’ve also got some spectacular engraving projects going through, as always, and we’ll be able to showcase some of those later this year. These include the 28-bore pair I mentioned last time, which I think will be the finest pair of 28-bore Rigbys ever engraved.

You’ve produced some fascinating limited edition rifles in the past few years, how do the ideas for these come about?

To be honest, it’s like all things at Rigby – an organic process that’s hard to pin down. When we set out to repatriate the firm and relaunch the company, I had a vision of where I wanted it to go but I had no set idea how to get there. I didn’t plan everything out in microscopic detail; I took a flexible approach and let things happen as and when the timing was right, and I think that’s been really important. It’s much the same with these limited editions: we haven’t been sitting around having meetings and being clinical or calculating about it; we’ve just gone with the flow. When something truly fascinating comes up, it sparks our imagination. If we think that it would be of interest to customers, we discuss it as a team here, then it either flies or it doesn’t. All the ones we’ve done so far have been extremely popular and there will be more to follow in the future. Certain projects we’re working on right now are even more exciting than some of the stuff that’s already come out. I daren’t say anything more at the moment, but people will hear about these soon.

Are there any people or places that you’d like to see commemorated on a Rigby in the future?

I think the biggest thing for us at the moment is looking towards our 250th anniversary in three-and-a-half years’ time. We’ve got lots of ideas that we’re currently playing around with and the right ones will naturally come to the surface. There are also some historical people and events that we’re going to try to commemorate, which will be revealed in good time, but again I can’t say more right now.

Now that liberty from lockdown is on the horizon, do you have plans for welcoming people back to the workshop and events over the summer?

I’m really looking forward to The Game Fair in July this year. It will be the first time we can showcase the Rigby brand together with Traditional English Guncases (TEG). TEG is an amazing family-owned business that we’re partnered with. They supply cases to much of the gun trade and case making is such an important craft. Preserving it is very dear to our hearts so we support the industry in any way that we can and that’s why we bought into the company. Having them with us on the stand at The Game Fair is really exciting.

As to people visiting here, we’ve hopefully got some clients coming over to hunt roebuck with us later this summer. It’s something we love to do with clients and I also find that it’s really helpful just to spend time out of the workshop. In my experience, the best ideas come when you’re not sitting there trying to think them up: they’re much more likely to appear when you’re spending some time in the field, perhaps sat in a high seat with someone, maybe having a beer down the pub – that’s when the really amazing ideas just pop up and you can run with them.

Are you looking forward to getting out for some spring deer watching and stalking as the days get longer and the English roebuck season begins next month?

Absolutely. April – May and July – August are my two favourite periods in the year for hunting roebuck. There are a couple of the other guys here who are really passionate about it as well. I also have binoculars in almost every window at home just to watch the deer. Where I live, down in Sussex, we’re on a beautiful hillside looking out over fields. It’s a spectacular view. One of my real loves is to just look out and see what deer there are on any given day. It’s got nothing to do with shooting them; it’s just a passion for deer, to spot different species and see them on a regular basis. I’m sure there are many people all around the world that can identify with this with various different animals – it’s never solely about hunting or shooting; it’s about just being around, experiencing and viewing these amazing animals that we have on the planet, and finding ways that we can support them, one of which is hunting. 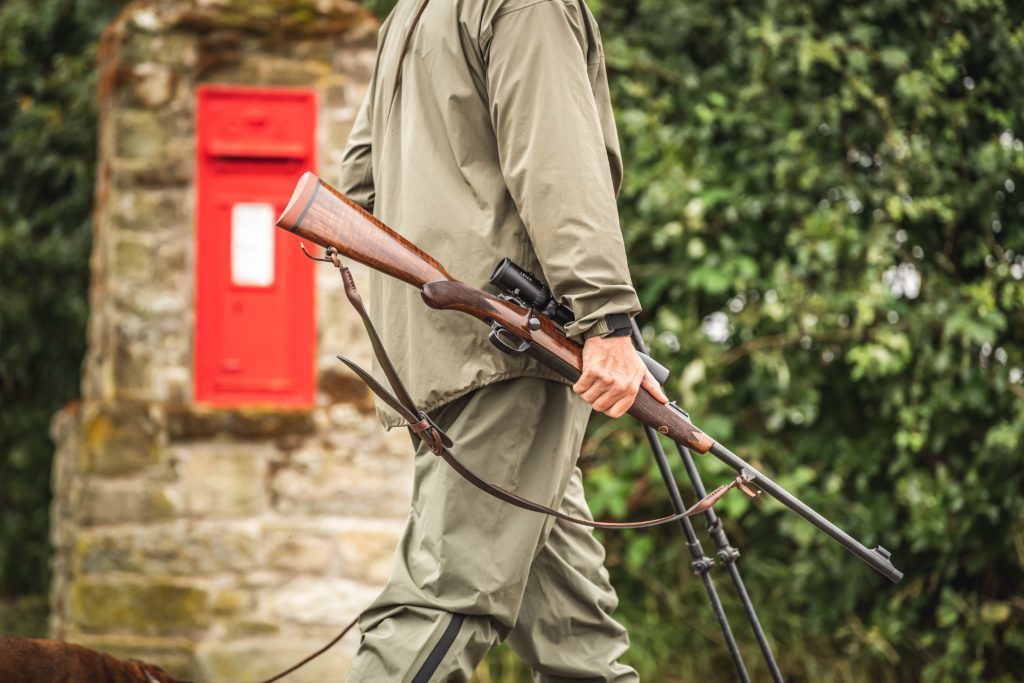