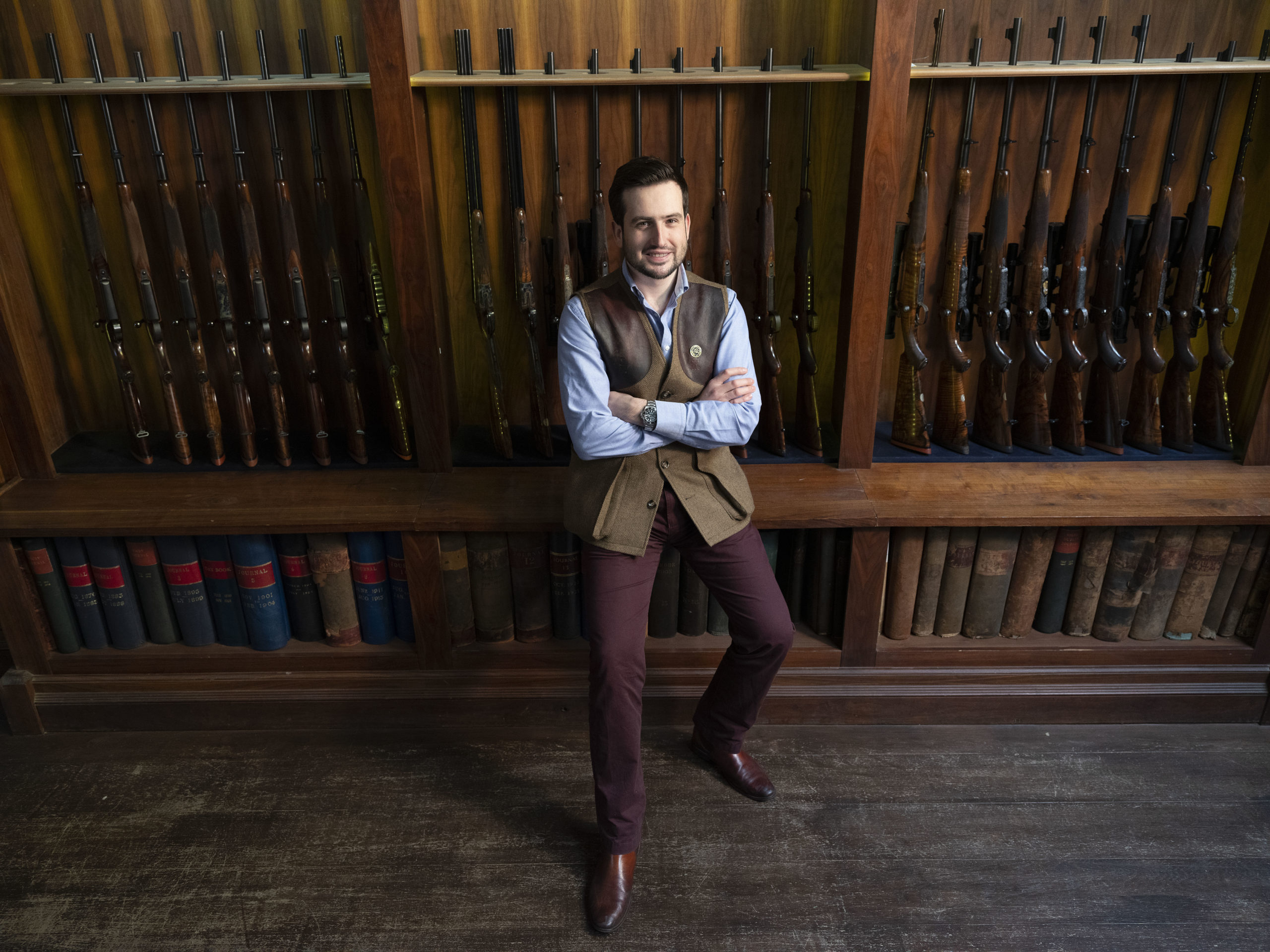 Europe’s biggest hunting and shooting trade fair, IWA Outdoor Classics, was meant to happen this month in Nuremberg, Germany, but has been postponed until September due to the Covid-19 outbreak. Are you disappointed?

Of course, we’re very disappointed. IWA is such a fantastic opportunity to go and showcase what we do and see many of our partners from around the world. It is becoming one of the team’s favourite shows to do, with our Rigby Scottish bothy style booth. However, the welfare of our staff, the welfare of our colleagues around the world, and of our clients, trumps everything, so it was absolutely the right decision to make. Whilst we watch the current unfolding situation, we look forward to attending the event at a later date.

You mentioned previously that you were hoping to show the world a glimpse of the new falling block at IWA. Can you tell us a bit about it here instead?

It’s a completely different gun from the Rising Bite or Big Game, very strong and accurate for a single shot when follow up timing isn’t critical. With this new one, we’ve accurately replicated the pre-War falling blocks that were made by Rigby in partnership with Webley and Farquharson. We really wanted these be very traditional and to look as authentic as possible when compared with the original design.

What type of hunting is it best suited too?

As with any rifle, it depends what calibre you have it chambered in. At the moment, we’re only making the falling block in .416 No. 2, which has experienced a tremendous uptake from collectors and hunters who take them to Africa, as well as perhaps keeping them in their showrooms back home.

Traditionally, Rigby always loaded these in a rimmed format for better extraction and loading. Though we’re only offering them in a .416 No. 2 at the moment, we’re looking at potentially introducing other calibres later.

How are the new team members settling in?

They’re doing great. The team is as busy as ever and we have a tremendous amount of work going through. It’s always a pleasure watching new guys gel with the older team and seeing everybody working together, taking the new guys under their wings to get the very best out of what we can do here.

What are the most eye-catching pieces on the workbenches this month?

As always, there’s some lovely stuff on the benches. We’ve just proofed the first .600 Rising Bite, which is quite exciting. It’s about to go for stocking. We’ve also got the first pair of 28-bore Rising Bite shotguns about to start stocking, so there’s some really exciting projects coming through. On top of that, there’s some incredible engraving taking place, which we can’t wait to show people at the shows next year. We have some clients at the moment who are really pushing the boundaries on traditional gun engraving and motivating us to come up with new ideas, so very exciting stuff.

Have you been able to get out for any stalking at home to see the first signs of spring?

No I haven’t been out at all yet. I will get out in the next couple of weeks to start spying for roebucks. I try not to shoot big mature roebucks too early in the spring. The theory goes – and it’s my personal belief – that shooting them too early tends to then allow younger, more damaging bucks to come in and start marking up trees and so on. It’s better to leave the old boys in place and assess them in the spring, then go after them in the summer during the rut. I also think a roebuck without colour on his antlers is a pretty sad thing.

Early spring is a great time of the year to get out and see what we’ve got on the ground, though, and also to thin out any poorer specimens that have perhaps not wintered as well. What we’re seeing on our ground at the moment – not that we’ve had masses of time to look – is that the mild winter seems to have produced some big, quality bucks. I’m looking forward to going and checking those out in the next few weeks.