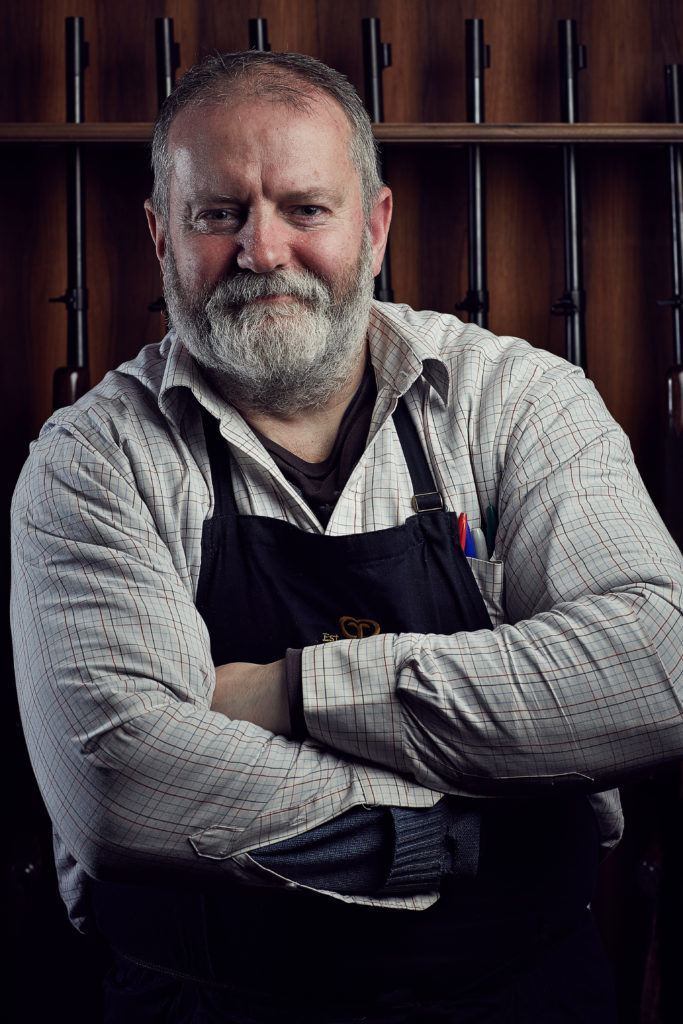 To kick off 2022, we chat to Head of Production, Ed Workman, about his route to Rigby, a love of engraving and the joy of tanks.

Tell us a bit about yourself and how you found your way to the gun trade.

I was born in London, but I’d consider myself more of a Cumbrian as that’s where I grew up. I came back to London when I was 21. I didn’t take a traditional route into the gun trade. I got a job as an auditor and, over three years, carried out audits for Purdey. I got on really well with the people there and they offered me a job. Having a numerate background was a big advantage and really helped me understand how to run a factory with a profit. It meant I could actually see where the money was going.

How did you become involved with Rigby?

Gunmaking is a very small world, so it was basically through mutual friends. Tony Sinnett, who I’d worked with at Purdey, was a good friend of Patty Pugh, who was working with Marc to resurrect Rigby in England. Tony – who now works with us at Rigby – knew that I’d run the factories at Purdey and at Holland & Holland, and I think he suggested that Patty and Marc ask me to help with the production side of things. I went out and met with them and that was that. I started working for Rigby part time to begin with. Then, as things grew, Marc asked me if I could work on a full-time basis. Now things are so busy it feels like I’m working full-time plus, but I don’t mind that because this is something I feel I’ve done so much to help build. I’ve always worked hard, but it’s much easier when it’s for something you’ve built yourself.

It was a fascinating time to be involved with Rigby: Marc had some great ideas and Patty was also crucial as a more experienced head to guide things. I’ve got a lot of admiration for Patty, who has been in the guntrade a long time and achieved a lot, and I’ve always enjoyed working for Marc, who’s the best boss I’ve ever had.

What is your role at Rigby now?

The job title is production manager. In practice, at the moment, most of my time is spent overseeing all the engraving. Largely because of the huge growth in sales of Best guns, my job has shifted to involve a lot more creation of engraving specs for the customers.

I’ve always had an interest in engraving and have a lot of experience working with engravers. Probably around 80 per cent of the engravers that work for us are connections of mine. Having worked with me before, they’re used to me and know I’m easy to work with and won’t let them down

Because I’ve had the privilege of working with so many of them and seen so many examples of their craft over the years, I think I’ve got a good appreciation of it. If somebody gives me an idea, I know how to translate it into something that will fit onto a gun. Sometimes, I’ll start from one sentence and work something out; other times, I’ll get a more detailed brief and have to try to fit that into the space available. On top of that, I have the experience that means I know to get the right job to the right engraver. Not everybody can do everything.

It’s also about fitting the job to the budget available. With some people, money’s no object, in which case there’s no limit. In other cases, people are on a tighter budget, and then you’ve got to temper their expectations to what they can get within that. The work is always going to be good, but you know you can’t have the absolute top-of-the-range for £5,000. Through experience, I’ve built up a range of engravers who I know can fit each budget and still be top quality for what a client has in mind.

What have been the highlights of your time at Rigby?

For me, the best memories are of our original customers: the ones who took a punt on us at the start when we had nothing to show them. These were the four or five guys who bought Rising Bites that were going to take us four or five years to deliver at a time when we were just bringing Rigby back and had no track record to reassure them. They’ll always be my favourites.

Another moment that sticks in the memory is getting our first multi-gun order from a prominent customer in the US. That was a great day and involved a lot of celebration.

Outside work, how do you relax and spend your time?

From when I was a kid, my interests have always been spitfires and tanks. I’m still very interested in history, particularly 20th century political and wartime history and the machinery involved. I like visiting tank and aircraft museums and model making. We’ve actually worked out a sort of ‘big five’ for armoured vehicles that I’d love to see engraved on a set of guns: for example, it’s not classic ‘big five’ in animal terms, but there’s a tiger tank, and a leopard tank… if anyone is interested, they’re welcome to get in touch!