What’s it like to hunt with a vintage Rigby double rifle? By Martin Mirwald 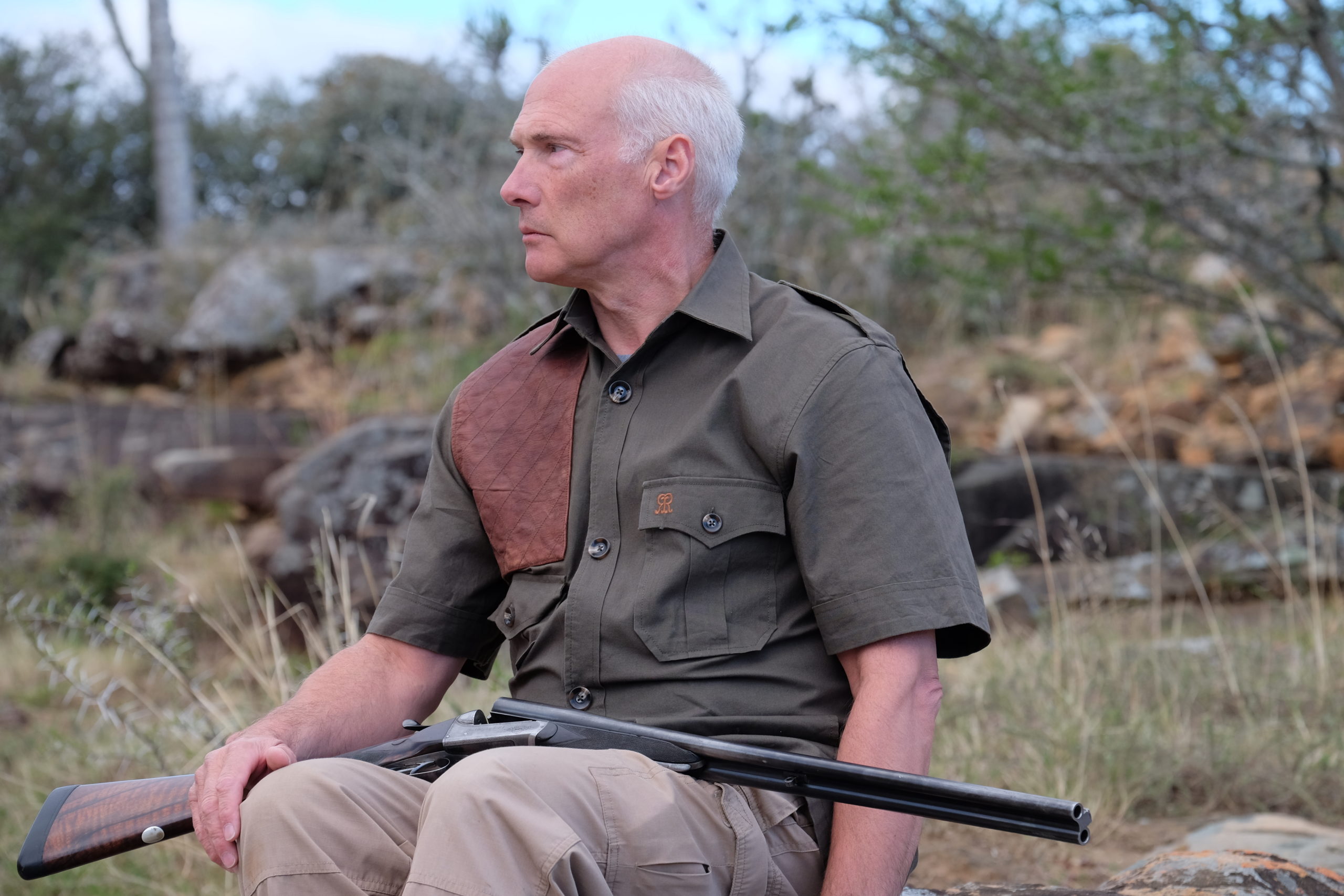 Keen British firearms collector Martin Mirwald got to experience this when he took his Rigby double .450/.400 3.25 in. to the Eastern Cape of South Africa in September 2018. A hunter since his youth, Martin has hunted in Africa numerous times, becoming seriously infected with the ‘African Virus’ during a stay in the Krüger National Park some years ago. Today he’s passionate about history, especially the late 19th century, which combined with his interest in collecting guns inspired him to purchase his Rigby double, originally put into business in 1905 by Lt. A. J. A. Douglas, in then British East Africa. Here he discusses the experience of bringing it back to the continent.

I acquired my Rigby double rifle (No.17290) in December 2016. After buying, Rigby kindly provided details of the gun, including the original owner’s name and date of acquirement. Shortly after, I immersed myself in researching the history of Lt. A. J. A. Douglas and his family, who took the rifle to British East Africa in 1905. It was clear to me that I wanted to take his rifle back, so I set to work at organising the hunt and all the elements fell swiftly into place.

As might have been expected, some technical problems had to be solved first. To that end Marko Frühauf, a well-known master gunmaker from Germany crafted a new ejector part for the left barrel and shortened the stock to fit me. Wim Degol, the Belgian specialist hunting bullet manufacturer, produced an extra batch of his 400 grain ‘Starkmantel’ bullets, suitable for the very tight barrels of my Rigby. Soon handloading became a success, I achieved good regulation at 50 meters, with muzzle velocities around 2,020 fps from the 26 in. barrels; not quite the historic factory announcement of 2,150 fps, attained with longer test barrels.

At Jagd und Hund hunting exhibition in Dortmund last February I met with Owen Poultney of Lanka Safaris and Jochen Buchold from Laserline Logistics on the Rigby booth. There we discussed the prospects of hunting with a vintage, unscoped Rigby double on the estates of the Poultney family in Eastern Cape South Africa.

Eventually on 1 September 2018 I entered African soil with my 113-year old Rigby to witness a grand tradition.

Llewellyn and Owen Poultney felt that a decent rifle like the Rigby required decent game. They suggested kudu, waterbuck or nyala. I had absolutely no objections, since my Rigby is a plain working rifle in a universal calibre and had certainly taken lesser game for the pot before. Considering the limitations of the iron sights and the unproven effect of the handcrafted ammunition, ethics dictated to stalk as close as possible and we agreed not to shoot in excess of 80m. This self-imposed limitation should even make the hunting more fascinating and would be a challenge for my hunting skills. Another consideration concerned safety, carrying a loaded rifle the ‘African way’ was out of discussion for me, besides of being so unpractical in the bushy growth and rocky terrain. Since my Professional Hunter was in front of me most of the stalk, I had to carry the rifle with one hand and butt facing forward. Thanks to the superb balance of the Rigby this wasn’t a problem, despite the rifle weighing 4.7 kg. 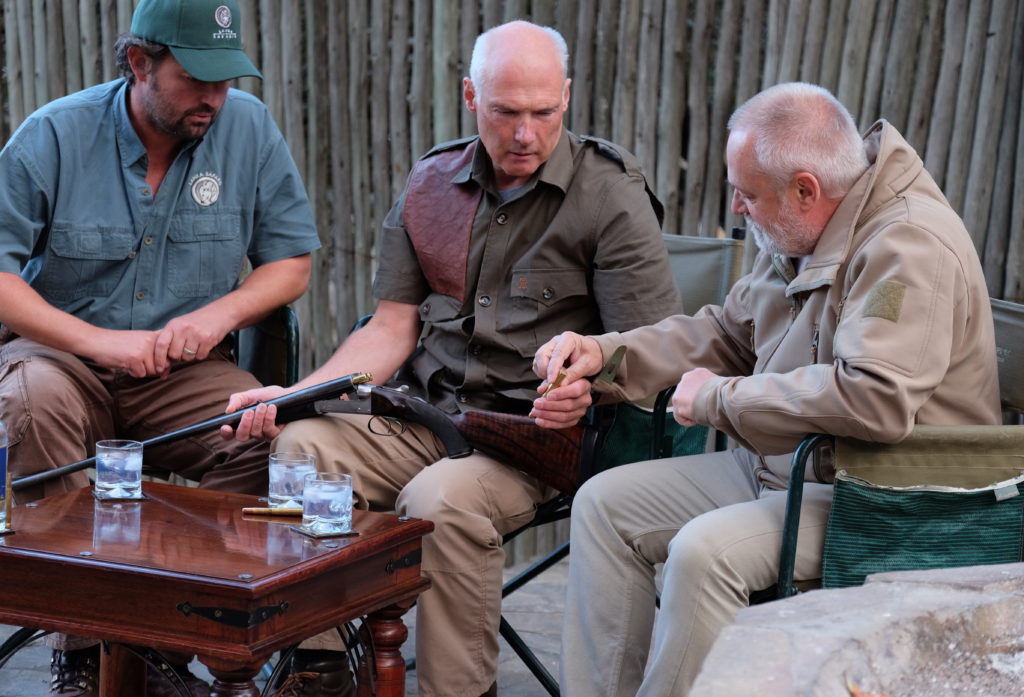 Late Monday afternoon saw Owen Poultney, his Jack Russel terrier ‘Bullet’ and me stalking alongside the Great Fish River. The light was already fading rapidly when Owen suddenly stopped. To our left was a kudu bull, feeding on the leaves of some bush. In an instant Owen had positioned his shooting sticks and signalled me to make ready. Should I shoot off-hand or better use the stick? The kudu raised his head. He had noticed us against the dark background of the vegetation and made a little indecisive move to have a better look. I opted for the stick and hurried to align the sights of the rifle on the kudu’s shoulder. The Rigby flashed out a glowing red beam, and the kudu dropped. In an instant Bullet darted away. When we arrived, the terrier was barking, jumping and tugging at the lying Kudu, who parried the dog with weak movements of his horns. A quick shot from the second barrel finished our stalk.

The following day I was out early with Llewellyn and his terrier Toby, the son of Bullet. We were accompanied by our tracker Wellington and taxidermist Michael Sens. Wellington drove us into a much more rugged terrain. From a stony ridge we glassed the shady bottom of a ravine and the opposite sloping hillside. Llewellyn spotted a dozing waterbuck downhill, so as a trio of Professional Hunter, dog and guest, we set of for the stalk, while the other two watched from above. The descent became a demanding task; loose stones and dry twigs covered the steep ground, every now and then you had to coil around a camelthorn or other scrub. Nevertheless, I was hooked several times. I constantly feared spooking the game, damaging my precious rifle, or both. It took us half an hour to reach a shooting position at the bottom of the ravine and to my surprise the waterbuck was still resting there. His head was up, and his ears were constantly moving, scanning the opposite ascent. Llewellyn offered his shoulder to rest the rifle for the shot, Toby at once took possession of the quarry and had to be chased away for perhaps an unnecessary finisher. The projectile was later unearthed from the ground by Michael Sens, mushroomed and still retaining 84 per cent of its original weight.

Over the next couple of days, the weather became cold and wet. On Wednesday I got soaked to the bone and had to protect my Rigby as well as possible with my hunting jacket. On Thursday the hunt was cancelled but by Friday we were back on and I spent the whole day in pursuit of nyala with Owen, the tracker Twenty and Bullet. For more than two hours Owen, Bullet and I followed one nyala bull, Bullet helped several times to find the spoor again. As Twenty later described, we came quite close, but the nyala eluded us, saying: “Nyala too clever”. After a late stroll along the Great Fish River again, we rode back in the dark and thus ended my first African safari with Lt. A. J. A. Douglas’ Rigby double.

I should like to add that even after more than a century there are “no flies” on the rifle nor on the cartridge. The rifle comes up fast and naturally, with perfect balance. You won’t notice much of the 4.7 kg weight. Shooting the 400 grain bullets is smooth and pleasant. Less than two inches with four shots at 50m is very good, all the more so, as the right barrel is considerably worn. The left barrel still has the potential for larger distances. The kudu was taken at 65 m, the waterbuck at 45 m. All bullets went clean through and no animal left the spot where they were shot. That is more than enough penetration and all the performance you can ask for.