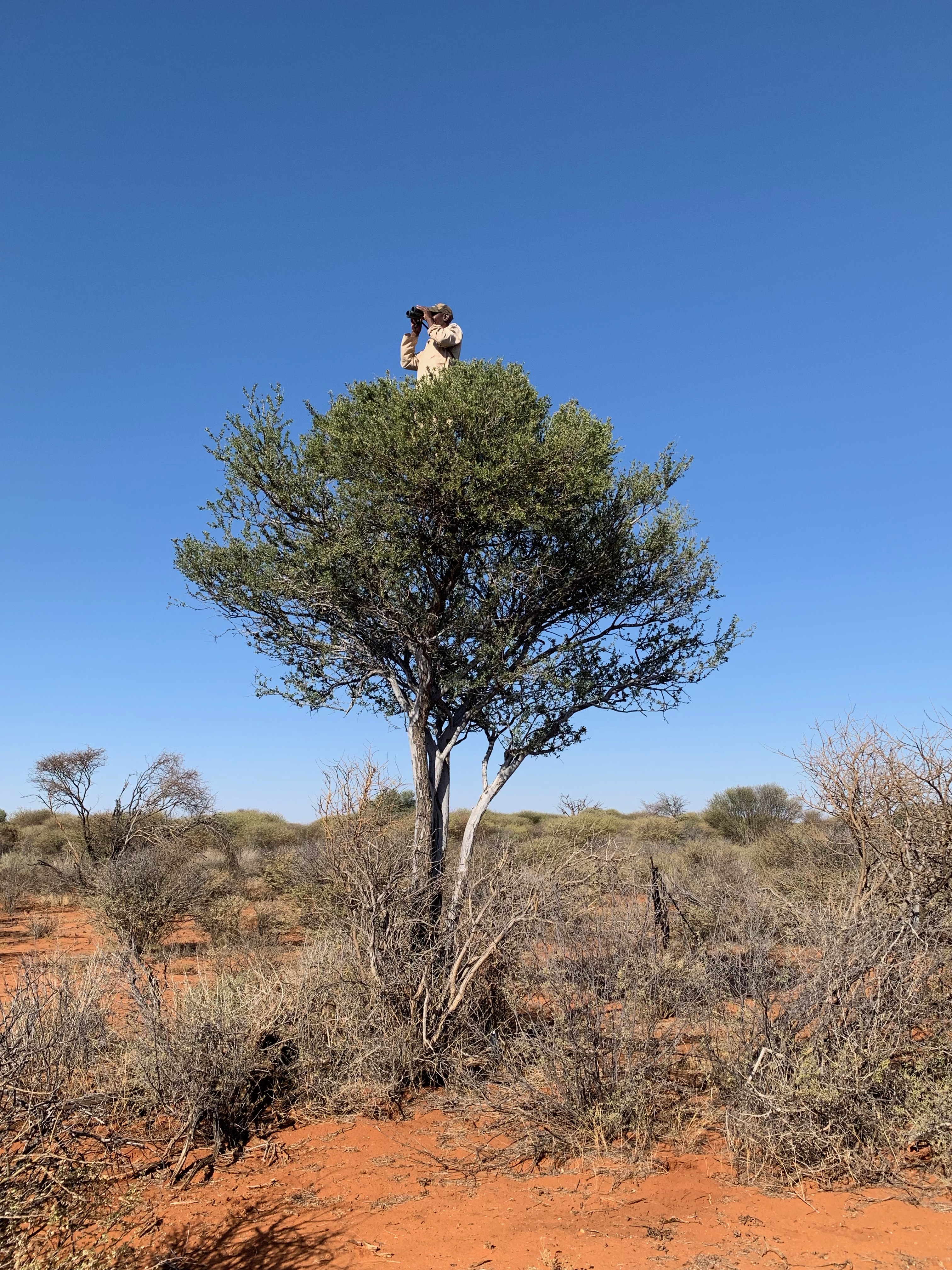 In this introductory blog, Edward Barrington takes his newly acquired Rigby Big Game rifle in .375H&H to Namibia in a quest to steadfastly support sustainable and transparent ethical hunting conservation with direct benefit to the local community.

With an expanse of over 22,000 hectares covered, all but one mountain ridge remained unclimbed before dawn and revisited by sundown. More than 70 kilometres stalked on foot during four days in temperatures reaching over 30°C in the Namibian Kalahari, the grey ghostly male kudus surrounded with their hinds lived up to all expectations and the Professional Hunter’s brief that this was going to be a ‘tough hunt’.  With shirt torn and hands bloodied repetitively from the barrage of hawthorn bushes that sprawled optically across the plains like a sea of sharpened moss my favour and resolve appreciated greatly for this magnificent animal.

From the initial bump, both local tracker and Professional Hunter deciphered the kudu herd’s trodden Morse code over an array of changing topography with almost lightening accuracy. The tracker had learnt these truly impressive skills as a herdsman tending to his cattle that would roam randomly grazing across extensive and unfenced land. Yet despite singling out the male from the spore, confirming times when the kudus had looked to bed, slowed down, turned to check our position or simply sped up and jumped obstacles, there was no denying we had been played.

The preceding days had been no less exciting with my new Rigby. On one chilly morning, we set off before sunrise in pursuit of a red hartebeest cull. With the sun now into its second hour above the horizon, we spotted a suitable herd some 400 metres away. The herd grazed to our two o’clock on a sandy orange elevated incline of no more than five metres in ascent that ran from our left to right. The wind blew gently perpendicularly on our backs. Electing to remain out of sight and out of wind we commenced the stalk ascending ahead slightly to our 11 o’clock. Once on the elevation, we meandered stealthily between bushes, trees and shrubs to within 150 metres of the hartebeest. It was at this point that our attentions and priorities radically changed on this plains game hunt. We had just inadvertently stumbled across a female adult white rhinoceros barely 60 metres away and completely upwind of her position. The only visible feature obscuring us from both her eyes and nose was her own backside! As if in nature’s game of chess, our new predicament read as if the hartebeest had chaperoned and straddled themselves in this unlikely animal partnership as a strategic deterrent. Almost in an instant, chess was exchanged for roulette, as nature upped the stakes and moved all chips onto red with the appearance of a rhinoceros calf standing a further 20 odd metres from its mother and between the hartebeest and us. 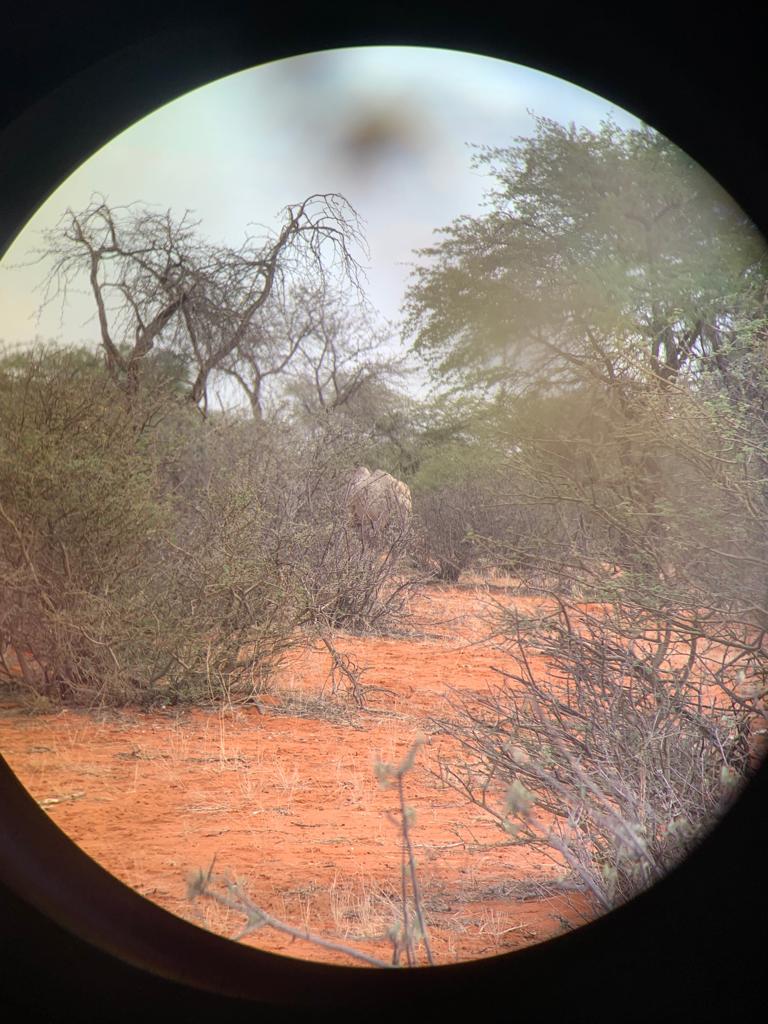 We did not wait for the wheel to stop spinning and the ball to come up against our number or colour. We were seconds away from our scent rudely knocking on the mother’s nostrils and announcing our uninvited presence. In quiet and careful retreat our promptness had its gears ratcheted up as this inevitability took hold. Scenting us the mother charged, not for us but towards her calf with acceleration that would impress most motorcar enthusiasts. This set in motion a momentary break in the animal alliance with the hartebeest herd sent scurrying in the opposite direction away from calf and mother.

We too sought a hurried refuge behind some scrub bushes.  Crouching approximately 150 metres away with half smiles of relief interrupted with occasional scans of reaffirmation that we had pulled off being unseen, our pulses subsided.

My Rigby Big Game rifle had performed impeccably since taking delivery at the handover at the shooting grounds a couple of weeks before this trip to Namibia, where prior to zeroing the scope (Leica Magnus i 1.5-10×42) I had been asked under instruction to test fire it at 50 metres using its iron sights. ‘Out of the box’, it respectively shot a straight bullseye and a close second leaving unquestionable first impressions both on target paper and the witnesses’ minds!  Similarly, each subsequent plains game animal that presented itself for the food plate on this trip including eland, hartebeest, springbok, wildebeest and zebra had dropped down straight to the ground with one shot using this Rigby in .375H&H combined with Norma Swift A-Frame 300 grain. A gold medal oryx barely made it out of the starting gates falling only a couple of strides with this rifle and load combination.

Now having repositioned ourselves away from the reunited rhinoceros mother with calf closely by her side, our focus returned to the herd of red hartebeest taking stock of themselves and placing a suitable cull animal back into the rifle’s crosshairs. At 220 metres, one shot from my Rigby Big Game rifle produced its audible bodily thud with visual impact and immediate expiration of an old hartebeest dropping to the soft Kalahari sand beneath where she had stood.  Drought had perpetuated a significant toll on the already arid Namibian Feld. With less rains, reduced vegetation offers itself both for the numbers of dependable plains game to feed and also consequently extending the distance that ethical shots are typically placed to avoid the hunter being detected.

A week before departure to Namibia, in London, my partner was discussing this upcoming safari with a friend who questioned and doubted that hunting conservation management benefited in the way it is portrayed. It was at the end of the first week’s hunt with my culled hartebeest and a fellow hunter’s springbok that we made a trip with the PH to the local community school. The headmaster warmly greeted us and proudly presented each class with students from nursery to senior primary school ages and the campus. The children sang in appreciation and some of the elder boys were nominated to join the headmaster at the outfitter’s truck to collect the butchered carcass cuts from our cull.  I had made the point to request to assist the outfitter in the distribution of the bush meat when arranging the safari. The outfitter uses the meat from the culls and trophies to feed its own 60 employees half a kilogram or approximately a pound per day respectively with additional distribution to the local school, church and elderly in the community. Namibia’s own constitution makes it abundantly clear how seriously this nation considers its wildlife, which sets a precedent for successful conservation management.

The ‘tough hunt’ had come to an end with the acceptance that after almost four days’ on the trot and donning a plethora of cuts and scratches, I would not have had it any other way. To have been so close, yet so skilfully denied by the alert detection of Kudu hinds protecting their bull fortified what true ethical and sustainable hunting experiences comprise. 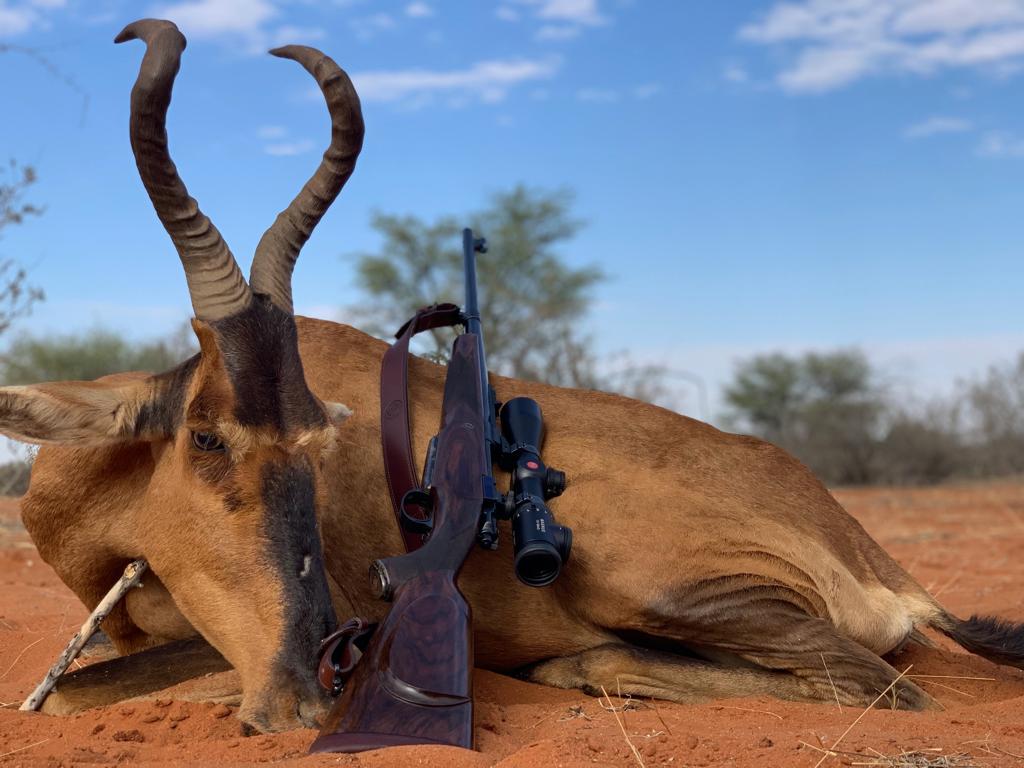 That final early morning, although the PH had packed our rifles in the truck, I only carried a camera with large 400mm telephoto lens and quietly stalked behind another hunter in pursuit of baboon pests to cull. Prior to commencing the stalk along the base of a couple of interlocking mountains, we had momentarily stopped to assess leopard spore from a glistening cerise impala skeleton that the sound of our approaching truck had probably disturbed. As our boots traversed between loose stone and rock to Kalahari sand our ears were drawn to the sound of scurrying baboons in the bush clambering for mountainous terrain above us. Some 200 metres further, the PH stopped in his tracks and turned to face me, his eyes protruding with a purposeful glare of combined disbelief and command for my promptness. Simultaneously his expression was accompanied by the opening of his hunting sticks reprieved from their four days’ service as no more than a shepherd’s crook and the silent mouthing of the word, ‘Kudu’ emphasising its size that even untrained lip-readers would grasp.

With immediate understanding the hunter in front of me sportingly relinquished his baboon cull and we exchanged camera and rifle respectively. The PH pointed up towards a large solitary kudu traversing the side of a mountain to the right of us. It had seen us and was walking briskly away towards cover despite the PH’s call to seek its intrigue. As my crosshairs trained for a clear shot and followed, the stationary shooting sticks began to twist and buckle adding unhelpful torsion to the rifle’s hold. The bull had secured a seemingly camouflaged resting point, obscured in the grey monotone of the bush and trees that perfectly blended with his own coat. The kudu known for its ability to disappear into its surroundings also has the uncanny skill to remain absolutely motionless as their eyes scout for threats. Only an infrequent twitch of his horns gave his obscured position away in the mountainous thicket. Without increased surveillance offered by hinds, this bull saw his moment to break cover. Recommencing his ascent on a steeper and a more direct approach towards the mountain summit, the rifle now rested on uncompromised and repositioned sticks. The still air was abruptly interrupted by the discharge. Subsequent echoes rang propagating across the neighbouring canyons and ridges. Elevated 35 degrees above us, its range confirmed by the PH at a little over three hundred and thirty metres, the kudu bull took the full impact from the single shot and succumbed to its prompt end resting at the base of a small hillside tree found to one side from the bull’s rear legs. 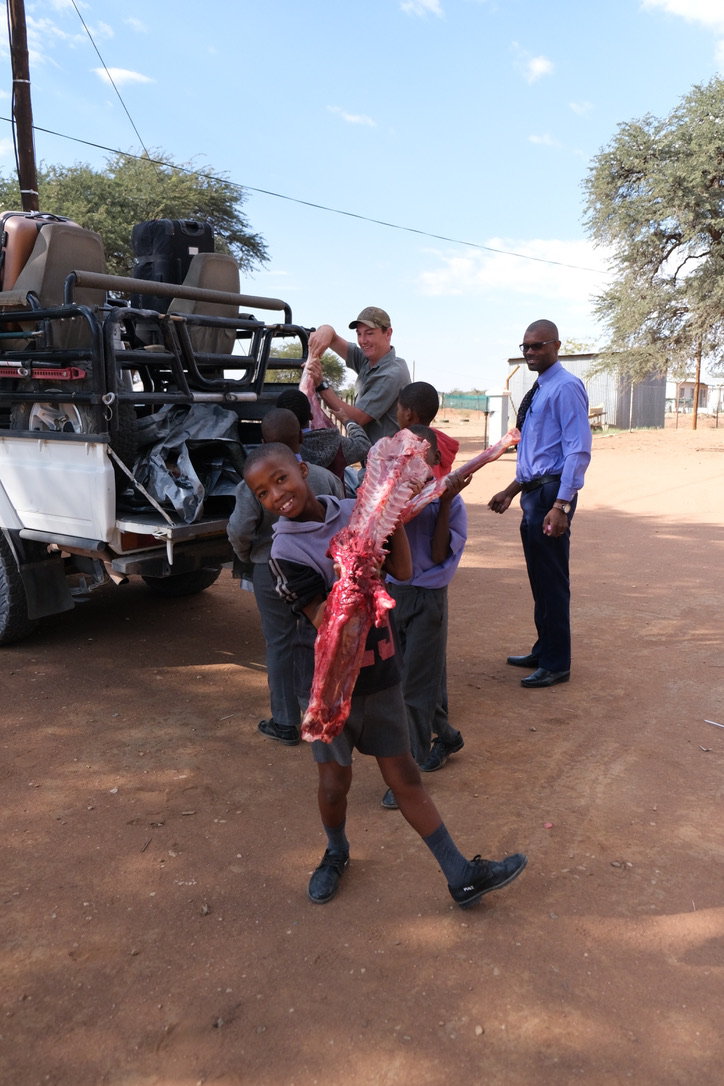 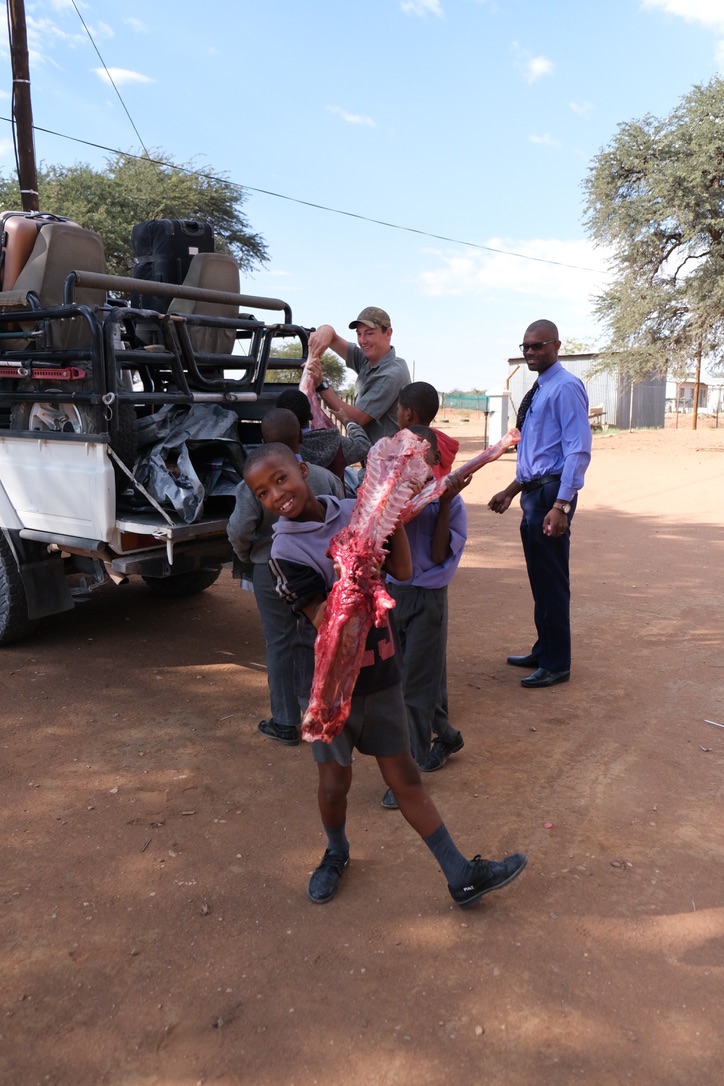 Two and a half hours after that shot fired, the final butchered cuts, had been brought down from the mountain on the shoulders of the helpers and loaded onto the truck destined for the larder.  The fact that this kudu’s horns measured slightly over fifty-five inches and recorded a second gold medal on this safari was truly coincidental. The humble and jubilant gratitude expressed by the workers, the singing and rapturous smiles on the faces of the local community school children and their training staff were the true measure of the success and positive impacts of these sustainable hunts economically safeguarding wildlife for generations to come. 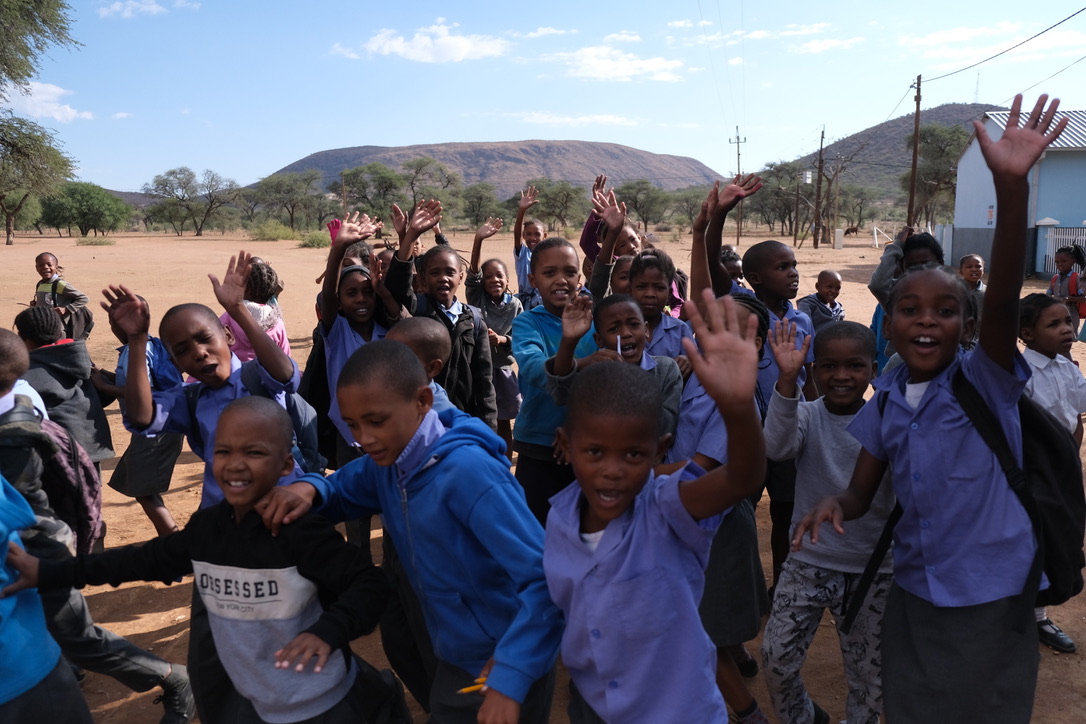