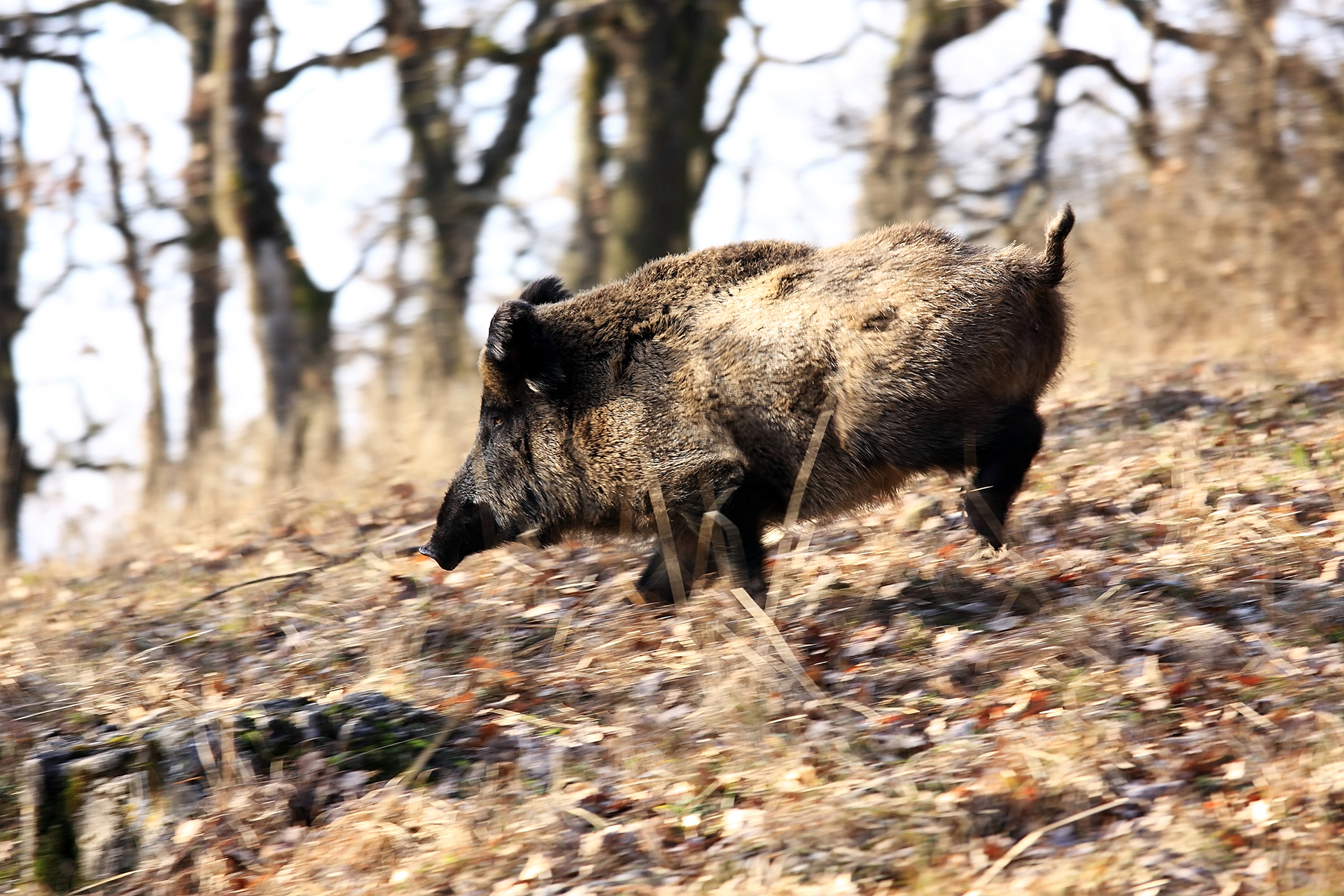 Edward Barrington’s hunt for wild boar in Germany, with his Rigby .375H&H Big Game rifle, which leads to a fallow buck’s taxi ride to North London, making an impressionable change on a group of partying artists.

At 08:00 on a crisp sunny Saturday in January, in the Saxony region of Germany, four stout German trumpeters stood outside and forcefully emptied their lungs with the traditional tune announcing that something exciting was about to take place, ein Drückjagd or driven hunt.

A little over an hour after the blast of the trumpets, safety briefing and drawing of pegs complete, all hunters were at their respective stands in a nearby wood familiarising their backstops, neighbours’ locations and watchfully in pursuit of the quarry. It was not long before the first guns fired into action. The faint sound of the beaters’ cries and their barking hounds echoed across the undulated landscape.

As my senses became immersed in my surroundings, I began to reflect on the challenge ahead. The Rigby running boar range near London had been instrumental in toning up rifle muscle memory and practicing lead, but training aside, wild boar are no strangers to strategically reading the lay of the land to avert hunters, beaters and hounds alike.

On three determined occasions, I had purposefully sought to bring ‘back the bacon’ as a gift for a good friend Jon’s upcoming 40th birthday supper celebration. On my third outing and after several hours perched in a high seat with literally a handful of minutes to go until official darkness and the conclusion of the permitted hunt, a fallow buck presented himself in my sights. I carefully reached for my phone and messaged my friend to ask if venison would be an acceptable substitute. Time only seemed to accelerate at this juncture, with diminishing light and the unpredictability of the buck merging into a perceived blackhole. Up popped the reply, “Please go ahead!”

Ten days later, the fallow buck was sealed and packaged at the game larder some 150 miles from its destination, in North London, where the birthday celebration would take place. Extravagantly, the only viable and speedy method of transport at that time was for it to be chauffeured exclusively there by taxi.

I discussed with Megan, Jon’s American girlfriend, keeping a ‘low profile’ as to how the buck had been obtained, especially as she had confirmed an array of Jon’s theatre acting and musical performing friends and colleagues would be in attendance, with some pronounced vegans and vegetarians.

On arrival at the birthday celebration, as I stepped through the front doorway, Megan announced at the top of her voice to all guests, “Hey everyone, this is Edward and he’s the hunter that shot the venison we’re eating!” As abrupt music stopping moments go, this was as noticeable as any vinyl record being jolted mid-session!

As I mingled and re-introduced myself, I became inundated with hunting questions. Questions comprehensively challenged the how, where and when, to the species of deer, the gun used and ethicality, so genuinely intrigued was this non-hunting audience.

The realisation and reconnection with food and its source appeared to genuinely rebalance preconceptions held by the fellow guests. The seemingly endless return of hungry party-goers queuing for more barbequed venison visually spoke volumes. Vegan guests agreed with the sustainable, green and ethical approach; this was echoed by one musician who told me his immediate reaction to Megan’s introduction was aversion to the hunted animal but now believed it to be a more natural means of acquiring food than from a supermarket.

Back in Germany, the cacophony of rifle discharges inched closer. Beaters’ yells and the jingle-jangle from barking hounds orchestrated into a phonic melee. The bells stopped abruptly at the foot of the stand. Both my wife and I leaned down and exchanged glancing acknowledgements with one the hounds, almost as if to mutually notify each other of our intentions and whereabouts.

Moments later a keiler or male boar, who had been sitting quietly in an island of reeds no more than 10-12 metres away, took his opportune moment once the line of beaters had passed to gallop full tilt through a widening of no more than half that distance. Swinging through his direction of travel with my Rigby, this boar was saved by a nearby tree and shrubs preventing a few more required inches of sufficient lead to pull the trigger. The quarry traffic that passed to and fro was either outside of the safety marker, the wrong sex or shrouded from making a clear shot. With a second flush of hounds and beaters, a red hind trotted into my Rigby sight’s crosshairs.

A little over an hour after the driven hunt had terminated, all hunters convened along one side of the quarry Tableau or Strecke legen outlined in pine branches as each corner crackled with burning log torches.

Each had been given its letzte bissen or last bite of pine branch. In German hunting etiquette and culture this marks a token of respect to the animal and acknowledgment emanating from Sankt Hurbertus, the Patron Saint of Hunters, symbolising its soul returning to our Maker.

Hunters listened in silence as the Jagdleiter or hunt master reported the achievements and results of the Drückjagd and paid thanks to all those involved. The trumpeters played a tune for each of the species harvested leading with reds. I exchanged customary thanks and collected my Schützenbruch or hunter’s branch in my left hand placing it on the righthand side of my cap.