Classic calibres and chamberings for sporting rifles by Diggory Hadoke 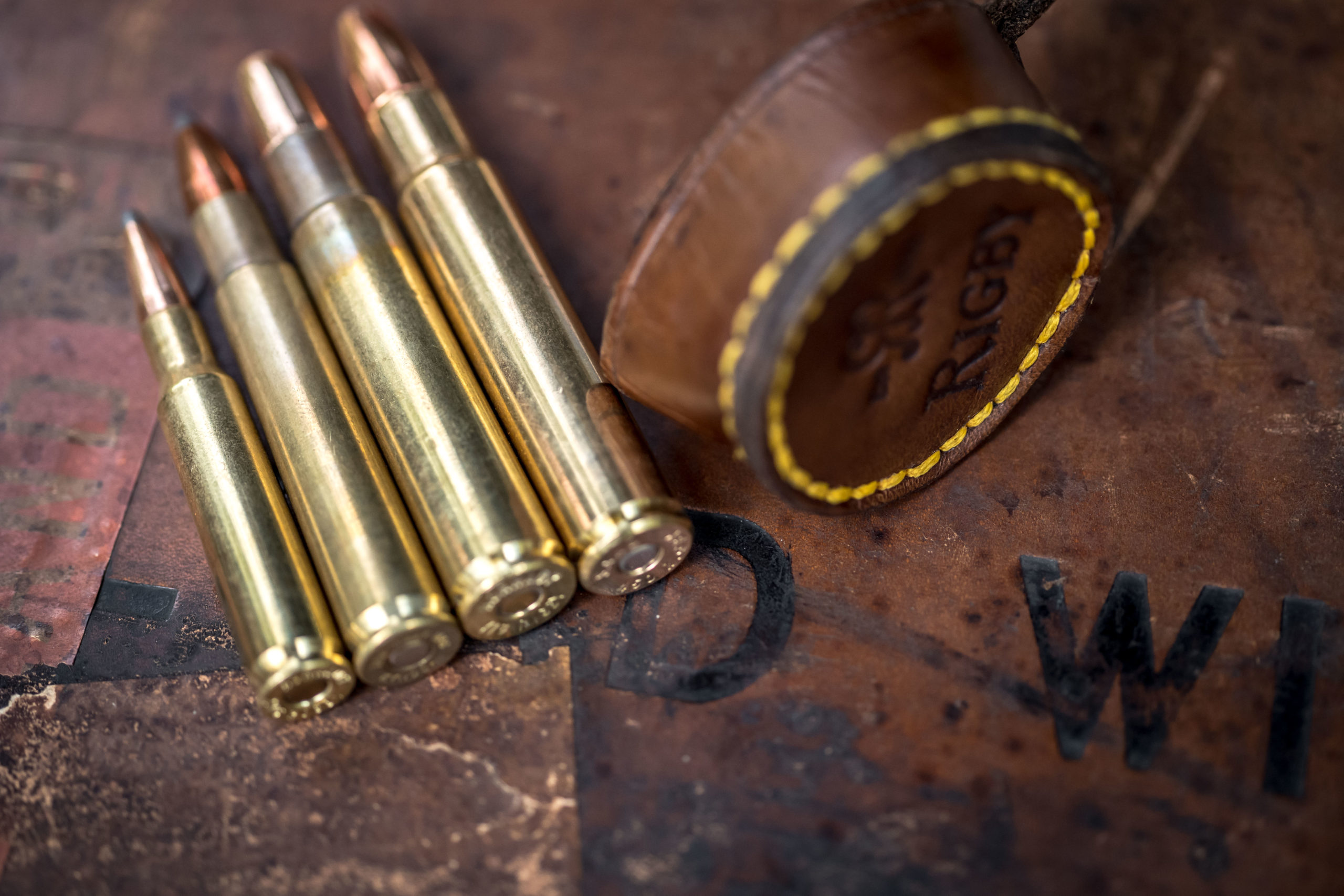 Rigby has developed numerous cartridges over the years. In this blog Diggory Hadoke delves into why these cartridges were originally developed, where the inspiration came from and who they were used by, right from Rigby’s inception to present day.

John Rigby set his firm up as innovators as well as manufacturers and Rigby gunmakers have been innovators ever since. One early development was the brass-cased Sneider .577 round, which saw service in military rifles as well as sporting ones across the world.

Later, Rigby developed some very influential cartridges for sporting rifles. The round widely adopted for double rifles was the .450 nitro express. It was introduced in 1898 and used the straight case of the .450 black powder express. It is a rimmed cartridge, suited for use in double-rifles or break-barrel and falling block single-shots. As a product of the transition from black powder to nitro (‘smokeless’) powders, some adjustments proved necessary in order to deal with the increased pressured produced by the new propellants.

Cordite was used in place of black powder and produced 34,000 psi; far higher than the 22,000 psi of the donor cartridge. This created problems with case deformation. Extraction problems are not what you need when facing dangerous game, so Kynoch provided a new version of the brass case, with stronger construction and the Cordite load reduced to mitigate the higher pressures it developed in hot climates.

With the teething troubles taken care of, the .450 became very popular, perhaps the ‘default’ chambering for double rifles that could handle everything well. Pushing a 480-grain bullet at 2,150 fps, it delivered a heavy enough punch to kill any African or Indian quarry. Among the famous users of the calibre, we can cite Denys Finch Hatton, one-time lover of Karen Blixen. He had a Lancaster double rifle in .475 (No.2) re-barrelled in .450 and used it regularly in Africa.

The demise of the .450 was the decision by British authorities to ban the calibre in India because of concerns that military calibres may get into the hands of insurgents. Sportsmen found a useful alternative in Joseph Lang’s .470 nitro express. Rigby themselves adopted the .470, which quickly gained a great reputation and has endured to this day.

Many would argue that the .275 Rigby, an anglicised version of the German 7×57 (AKA 7mm Mauser) is their classic round. It certainly sold in large numbers in the Rigby-Mauser rifles that the firm offered in the years before the outbreak of World War Two. The .275, a bottle-necked case with a long bullet was the choice of many a Scottish deer stalker as well as the, somewhat unconventional option that W.D.M. Bell selected.

The most famous of Rigby’s .275 users is undoubtedly Jim Corbett, who was presented with one in commemoration of his 1907 slaying of a man-eating tiger. He used the rifle to shoot the ‘Man-eating leopard of Rudraprayag’, as well as scores of other animals over the following three decades. Corbett’s rifle now resides in the Rigby collection.

In 1904, Rigby also developed a .350 Rigby Magnum version of the Mauser, firing a 225-grain bullet at 2,580 fps as a medium game rifle. This was hugely successful with African hunters, drawing fulsome praise from John Taylor, who considered it ‘perfect’, until the 1950s, only being overtaken by the Holland & Holland .375 Magnum as an ‘all-rounder’.

The .416 is among the most respected and desirable heavy bolt-rifle chamberings for Africa and a favourite of Professional Hunters. It was originally developed for use in Magnum Mauser square-bridge action bolt-rifles. Today, Rigby are again offering a classic Magnum Mauser in .416 as part of the ‘Big Game’ range.

Rigby’s next development came into being during the 1990s, when Paul Roberts decided there was a case for making the Rigby .450 nitro express into a rimless version for use in bolt rifles. This came to be known as the .450 Rigby. The new round pushed the bullet at 2,400 fps. It is a current option in the Rigby ‘Big Game’ range.

This brings us up to date, when last year Rigby launched a new round, the .416 Rigby (No.2). It is intended for use in their latest double-rifles, featuring their classic patent ‘Rising Bite’ action. The exercise is a reversal of Paul Roberts’s adaptation of the rimmed .450 to make it a rimless cartridge for use in bolt-actions. Rigby have created a rimmed version of the .416 rimless cartridge, so it can be better used in a double-rifle.

Rimmed cartridges are better shaped for extraction in a double-rifle or break-open single, for that matter. The brains behind the project is Dr. Eckhard Stief, a German hunter and cartridge developer, who collaborated with Rigby to create the new cartridge.

The pressures and velocities of the new round mirror the existing one. Dr Stief considered this important, not least for the practical reason that home-loaders of the standard .416 rimless can use their loading tools and data to create loads for the new .416 rimmed cartridge. The original .416 Rigby is interesting in that it was a new design in 1911, not adapted from an existing case. It has been the parent casing for a number of previously released cartridges, including the .378 Weatherby Magnum, the .450 Dakota and the .338 Lapua Magnum.

The original .416 Rigby was a favourite of J.A. Hunter, John Taylor and Harry Selby. In its latest incarnation as a cartridge for Rigby’s double rifles, it has a bright future in the hands of today’s adventurers. I’ll be interested to hear of its exploits in the years to come. 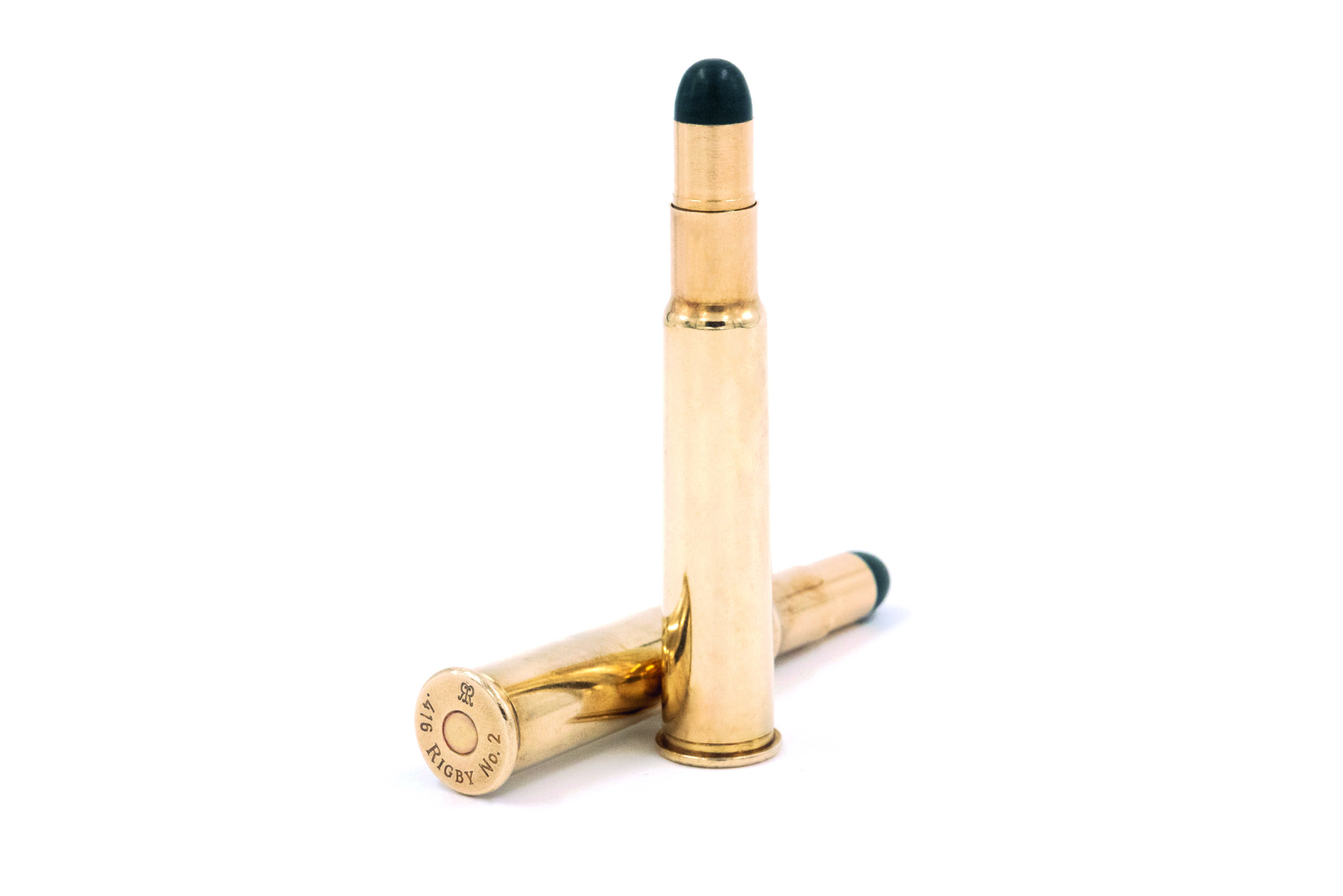