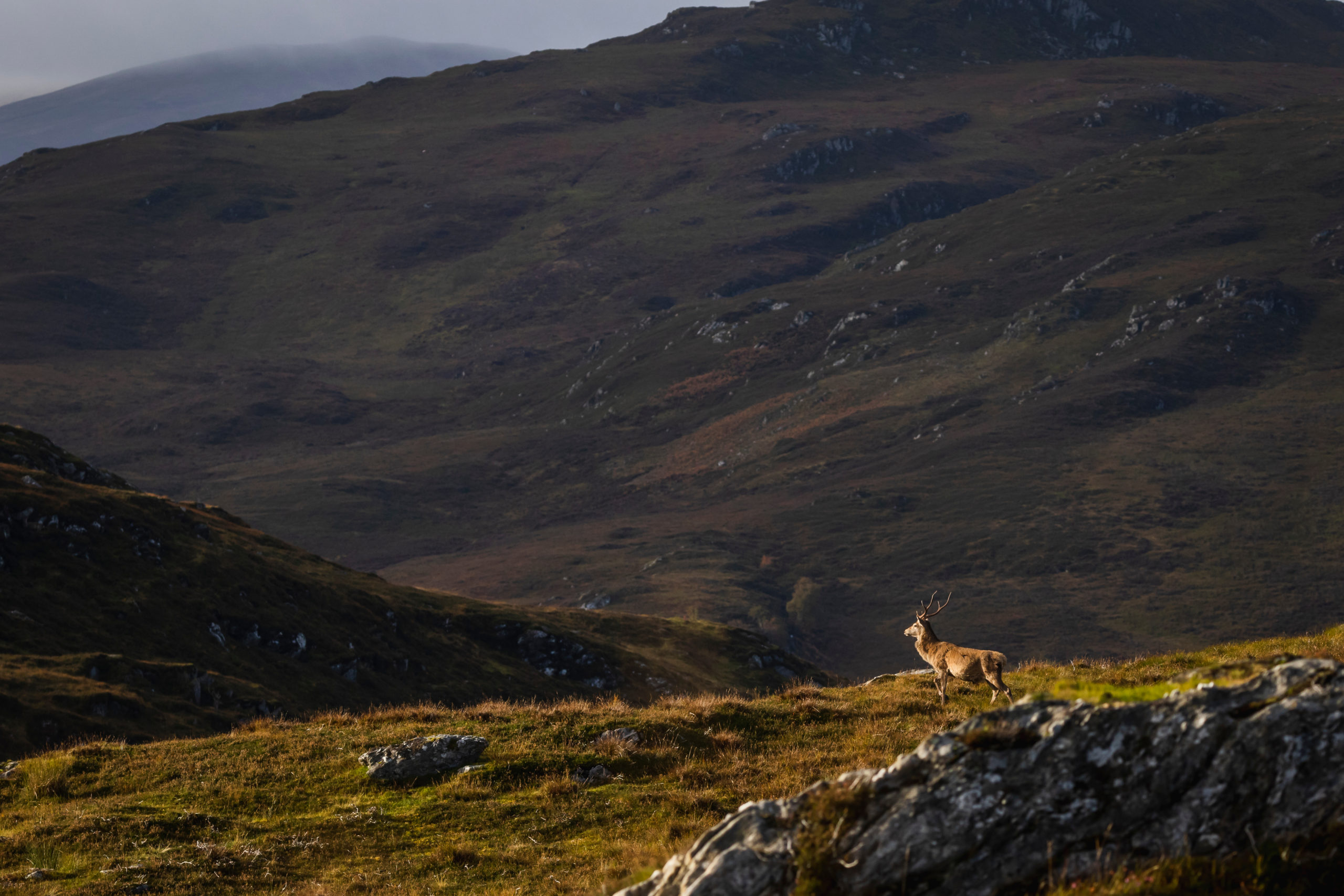 A passionate hunter and conservationist, Rigby adventurer Chris Rogers is the deer manager on the 10,500-acre Euston Estate in Suffolk. Here, he recalls a memorable red stag stalking trip in the Scottish Highlands, with his trusty Rigby Highland Stalker rifle proving to be as reliable as ever.

In the 13 years I’ve worked on Euston Estate in the English county of Suffolk I’ve done my fair share of red deer stalking, but the number of old stags has dwindled in recent years. Longing to go red stag stalking again, that’s why I booked a trip to a place synonymous with red deer.

Stag stalking on large Highland estates is extremely popular, so I was fortunate to secure a booking with clients for six days near Aberfeldy.

On the first day, of the two stalking parties, one had success with a fine old 10-point stag. The second party drew a blank with a close opportunity for a shot dashed at the last minute. The next day was successful for the two stalkers, with a stag for both. The following three days also proved to be successful for both stalkers in a week of sunshine and rain.

It was now my turn to carry my Rigby Highland Stalker out on the hill. Heading up a stone track in the Land Rover with the Argo being pulled along on a trailer, we reached a starting point. The Argo was driven off the trailer and we headed higher up the hill to our drop-off point for the stalk.

The plan was to cover a large area of hill starting in one direction. Having only walked 300m my stalker spotted some antlers down on the left-hand side of the burn, about 900m in front. There wasn’t much to see from the position we were in, so we carried on slowly.

The ground opened up on the right and a herd of some 15 young stags suddenly jumped up, clearly surprised by our appearance. The young beasts sensed they were not on the target list – we were looking to take poor mature or old stags – and they happily watched us carry on past them before they eventually trotted off up the hill.

My guide, Steven then took one last look back up the hill we had come down and, as I was getting ready to move back into the burn, he signalled for me to keep down. Although we could see a smaller group of deer through the heather, we needed a clearer view and after slowly shuffling up we observed three stags sat behind a group of hinds and calves, totalling eight deer. One of the hinds was stood, looking in our direction as we lay down in cover. Slowly, we positioned my rifle onto my back pack and Steven selected one of the three stags to take if it stood up and presented a clear chest shot. After what seemed an age, the hind sat down but continued staring intensely at our position. We lay for a good hour and a half, occasionally looking through the scope at the stag in question.

I jokingly whispered to Steven that when our stag stands no shot would be available. As if he had heard me, he rose to his feet and presented his backside! I raised the rifle on my pack, waiting for him to turn side-on and with that he started scratching his left haunch with the tip of its antler. He then sat down, all the while presenting no sensible shot to the chest. After another hour he hauled himself up, this time standing dead front on. We weren’t going to give him a second chance and the shot rang out across the hill, sending the stag back down again into the heather.

I reloaded, put the rifle on safe and watched the other deer move off. We had laid so long that the deer had no idea where the shot had come from. They weren’t even that bothered about the un-moderated bang of my Rigby Highland Stalker .275.

We continued to lie and watch for a few minutes just in case the shot stag was to miraculously spring back into life, which he didn’t. We then saw another group of 40 deer heading directly to our position in pursuit of the reds we had. Steven had been watching the larger herd all along and had spotted a stag with poor antlers picking on the rest of the group. Although the rut was a week or so away, he had been throwing his weight around and generally being a nuisance to the younger stags. I located him in the scope and tracked him as he came closer. The soft bang of the Rigby rang out again and, reloading, I watched the beast stagger a little and then fall to the ground.

We waited a few minutes but we both knew the stags were dead. We approached the deer to confirm the culling criteria. Both were good-sized stags with poor antlers – good beasts to take from the herd. It had been a fine conclusion to the week which saw us take 12 stags in six days on some of Scotland’s finest ground. As for the Rigby Highland Stalker, it put the bullets in the right place and topped off a great couple of shots. It’s a delightful rifle to stalk with and, as the name suggests, it’s truly at home in the Highlands.

Chris can arrange red deer stalking for stags or hinds in various locations across Scotland in addition to stalking at Euston, England. Email him at: eustondeerhunting@yahoo.co.uk. 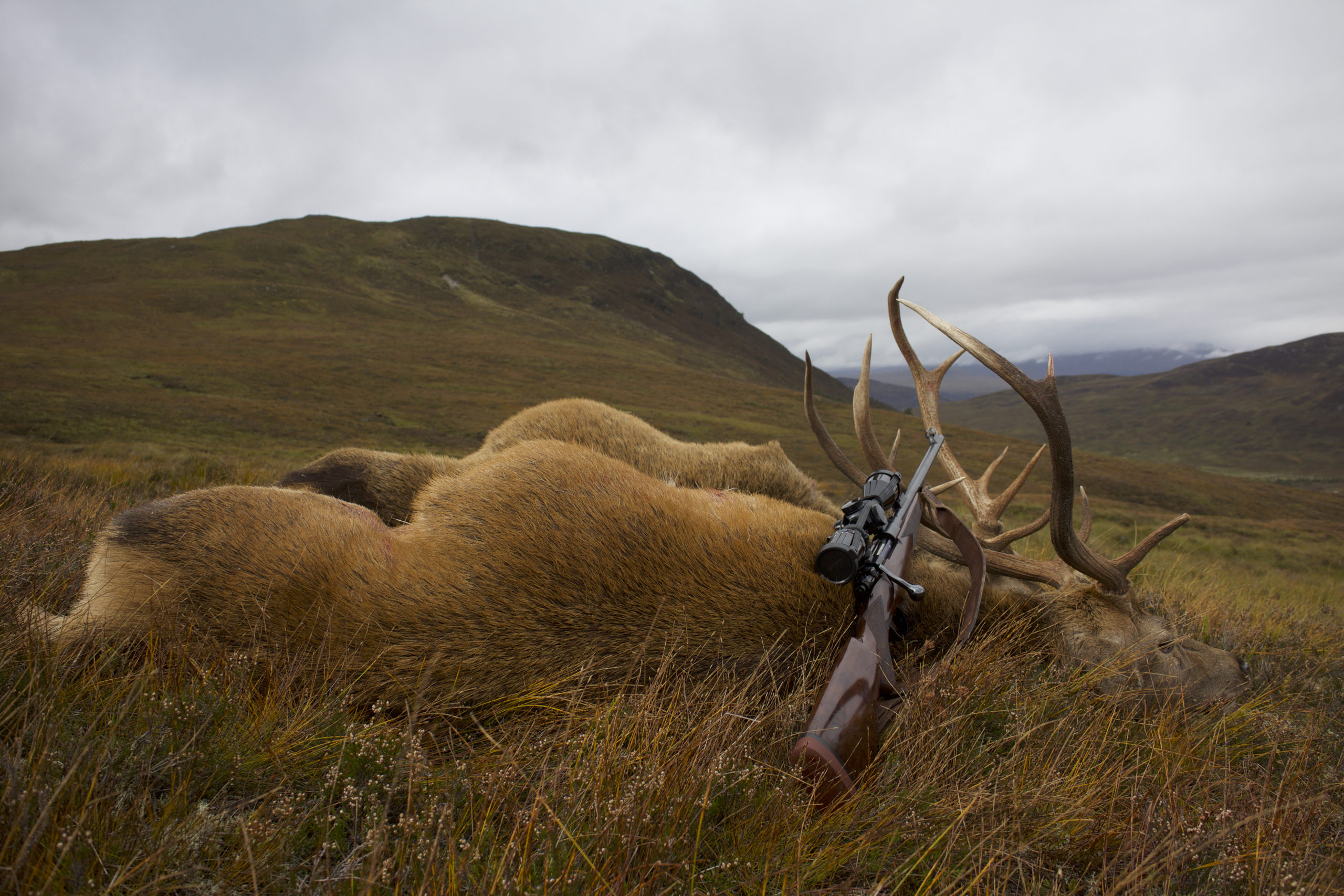