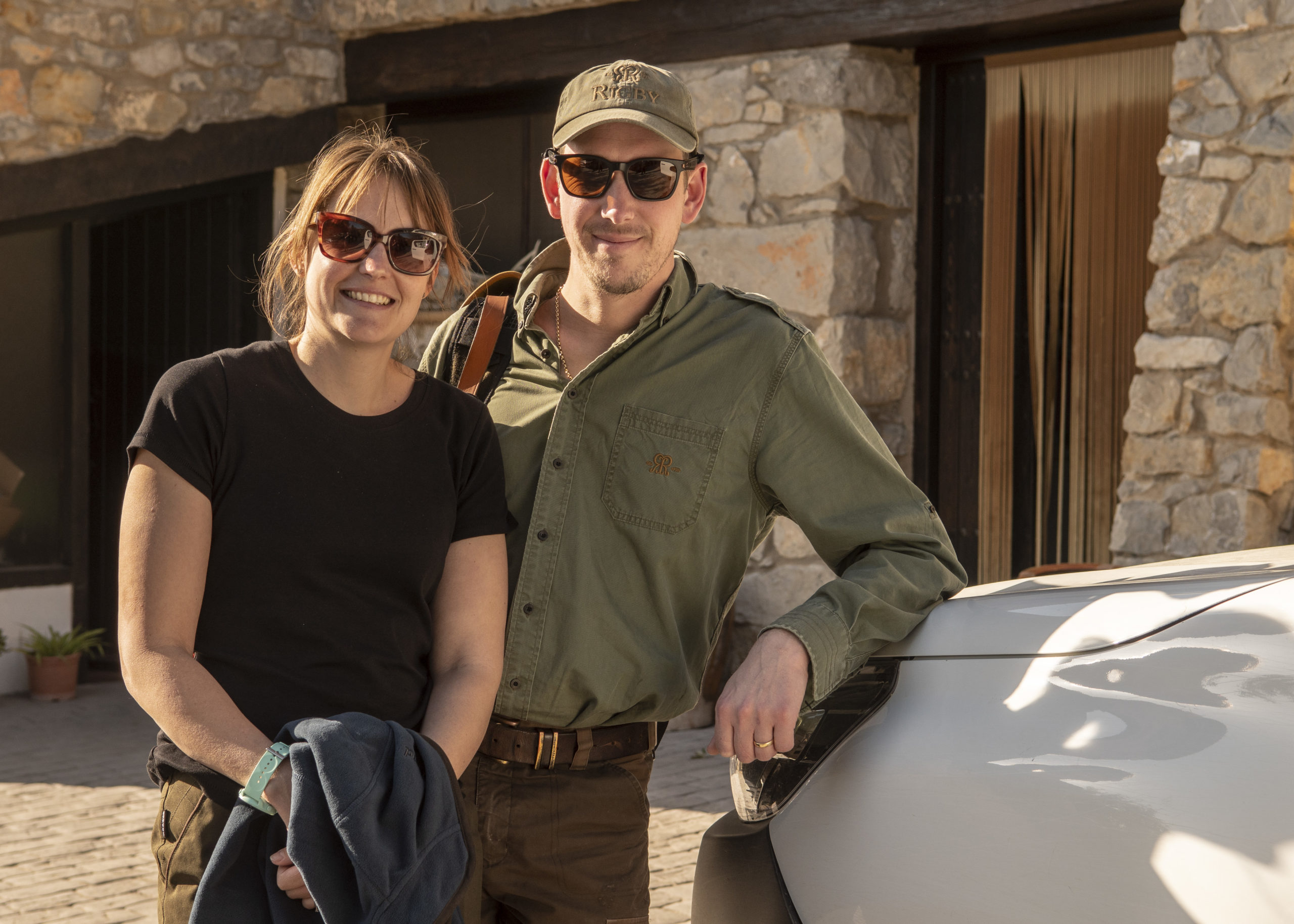 There’s nothing like getting away for a winter break to the sun, but when I said to my wife Anna we were heading to the Castellón region of south east Spain for a long weekend, I’m not sure she had tagging along on a hunting trip in mind. Hunting the Beceite ibex, one of four sub species of wild goat found in different regions of Spain, in the middle of February would be a new experience for us both.

The area we were hunting covered 80,000 hectares and we drove 30 miles through a mixture of vegetated valleys and more open sparsely-covered rocky hills to get to our allocated area.

Although my guide, Jordi, didn’t speak much English I understood his explanation that there were no roads where the ibex could be found, so we drove to the top of a ridge, parked up and headed off on foot. It was an incredible landscape to walk in, with loose rocks littering the dry orange soil in between the rosemary and juniper bushes. Working our way through and around a mixture of these terraces, scrub land and over, up and down stone walls we navigated our way into position.

Jordi gestured for us to hang back while he scouted over the top of the next hill and he sank slowly to his knees as he stalked us right to the spot where a group of ibex had bedded down. I spotted the ibex as I crested the hill and Jordi started setting up his sticks.

I placed my Rigby Highland Stalker carefully on the sticks and judged the distance to be 50 metres. We could see four –­ a female, two males and a male kid. Jordi tried to explain which one he wanted me to shoot and I understood the instruction to shoot the one ‘behind’. “Shoot, shoot”, urged Jordi, but the one I was focused on was obstructed by the kid. Jordi took the sticks, shuffled them a little more to the right and repeated “shoot, shoot“. The soft bang of my .275 Rigby Highland Stalker rifle rang out and I saw the ibex fall immediately. We then watched the surrounding undergrowth rustle to life and the other ibex dashed off to safety further up the hill. 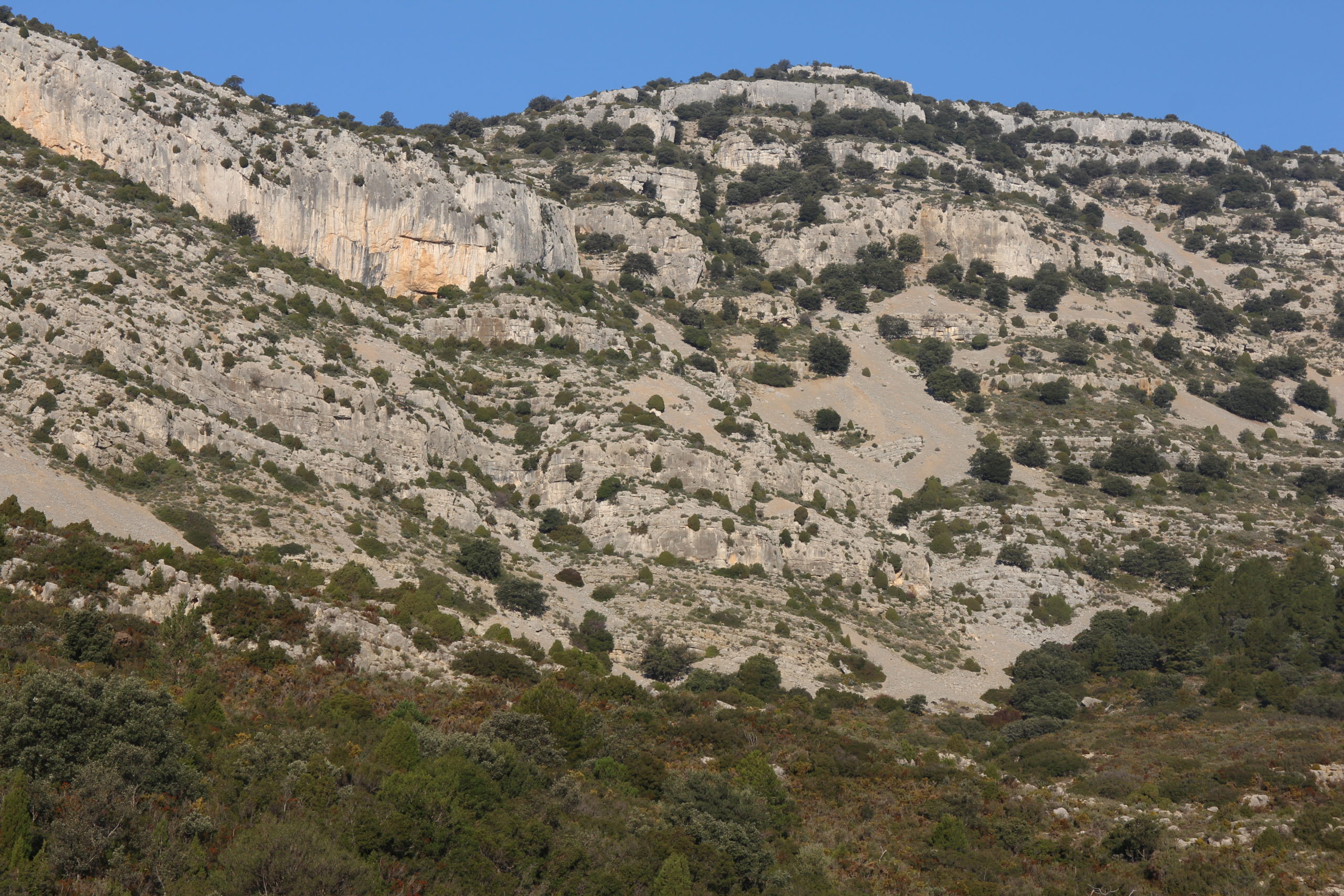 My heart sank when I understood Jordi say, “you shoot wrong one”. He had intended for me to shoot a representative male but, lost in translation, I had taken a slightly smaller cull animal. Jordi seemed happy enough with the mistake and I understood him to say it was a good one to take anyway as the six-year-old was not going to produce longer horns in future.

The bullet had struck a little higher than I had aimed it was close enough. Following customary pictures, we cut out the two loins which we ate for dinner on the last night. They were a little tough, but the flavour was great.

The following day I headed out for a female ibex. I spotted two feeding half way up the slope, we dropped down into a small valley, using it for cover as we headed up the hill. It started out as a rocky ravine, but as we went up hill we faced waist-high gorse bushes interspersed with rosemary. I began to regret my decision to wear lightweight summer trousers as we waded through the spinney gorse and, keen to avoid putting a lifetime’s worth of scratches onto my rifle stock in one day, moved my Rigby out of the way of as many branches as possible. 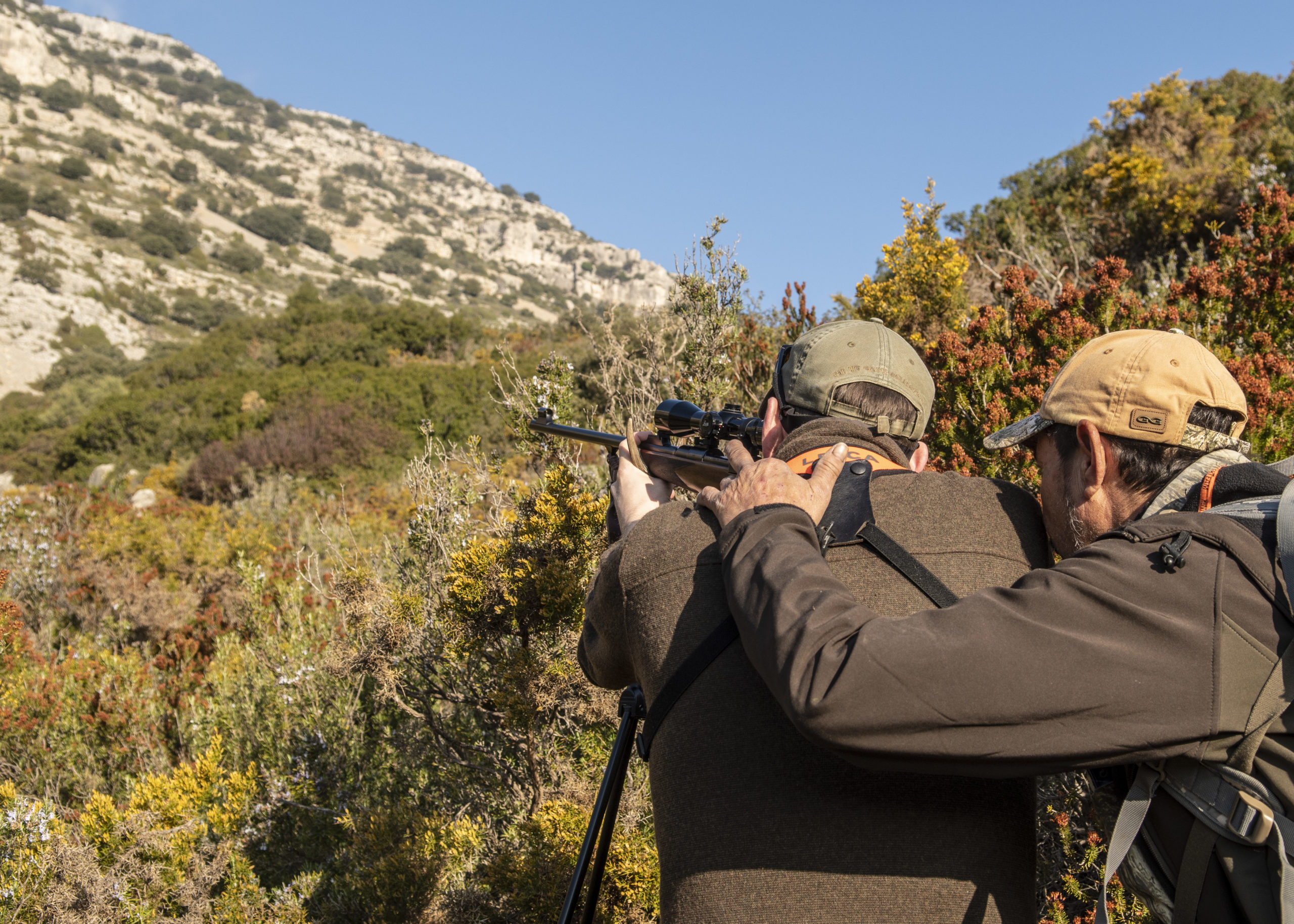 We reached the head of a valley and suddenly Jordi put his trigger sticks up and gestured for me to get the rifle on them. I got the gun up and searched the hillside for the ibex, spotting them after a few seconds. They had seen us and were heading towards a large area of cover. I pinged my Leica rangefinding binoculars onto the nearest large rock to make sure I had a good reading. It came back at 230 metres. The ballistic calculator gave a click factor of 11 which I knew to be accurate as I’d set up the binos for my chosen .275 bullets a couple of days before at home for just such an eventuality. Hoping I had enough time to adjust the scope, I unscrewed the elevation cap and clicked up the instructed number.

As I’d set up my scope for a 100m zero and checked the bullet drops on paper at home I knew that at 200m the bullets would be dropping 9cm and at 300m they would have dropped some 61cm. I’d already decided that at 200m if on a pack I’d just hold over, but off the less stable trigger sticks, shooting uphill at a good 45 degrees with bended knees I wanted the reassurance of being able to place the cross hairs on the animal’s chest and I was relying on the ballistic calculator to take the angle of shot and elevation above sea level into account.

After confirming with Jordi which female to shoot, I held my breath and the soft bang rang out. It was gratifying to see the female drop on the spot, rolling down a couple of natural rock steps but stopping dead before she fell any further. Given the situation, I was pleased with the shot and Jordi was enthusiastic. 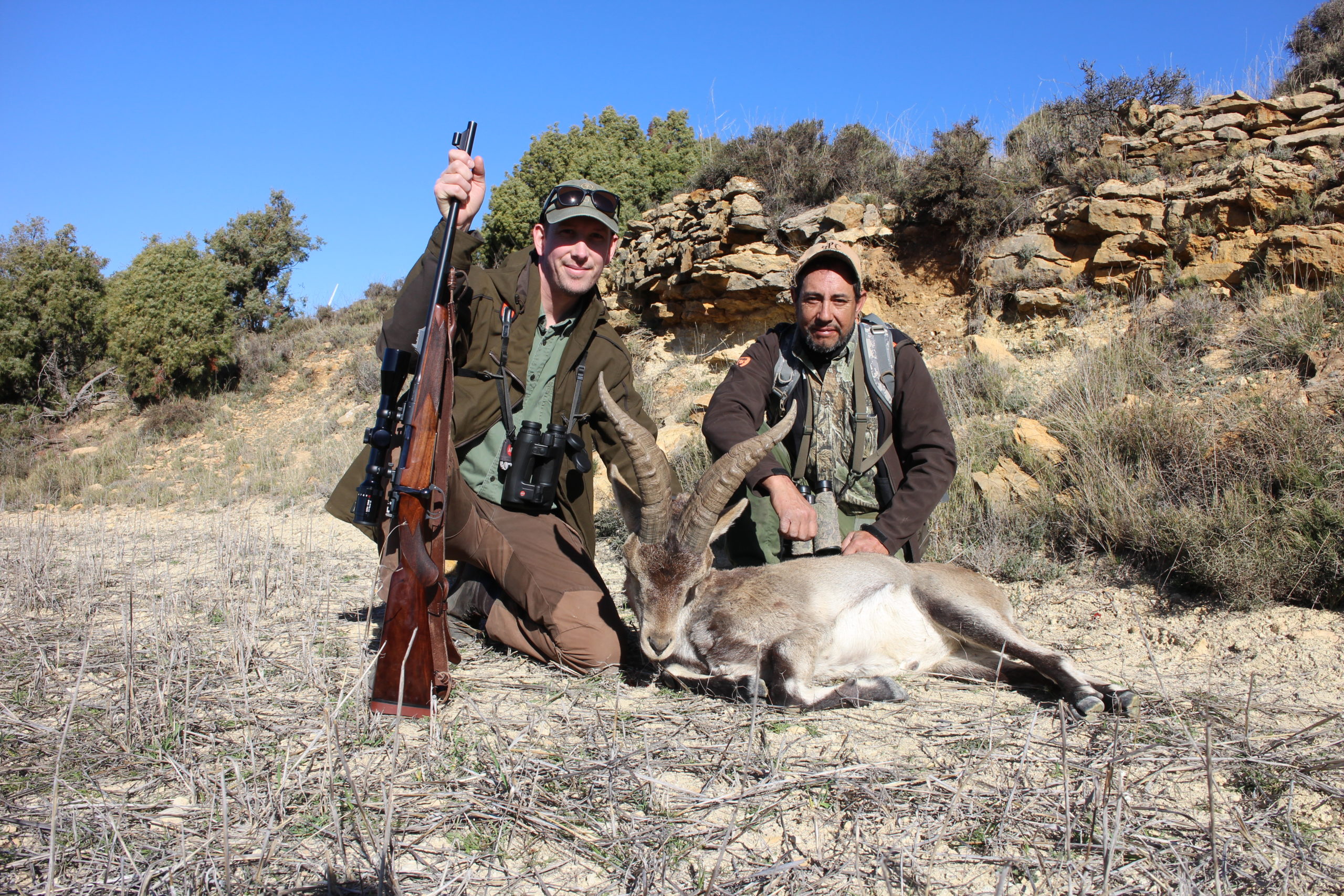 A typical female ibex has short 10cm horns and I could see that my one, lying on the edge of a flat rocks, was different. Both horns had grown curved down. On seeing the head Jordi became more excited, repeating “special trophy”. Jordi’s phone came out and pictures of the extremely old 15-year-old female were sent out immediately to other guides.

The stalk on the female ibex had been great, topped off with a shot I was proud of and a trophy of a lifetime. 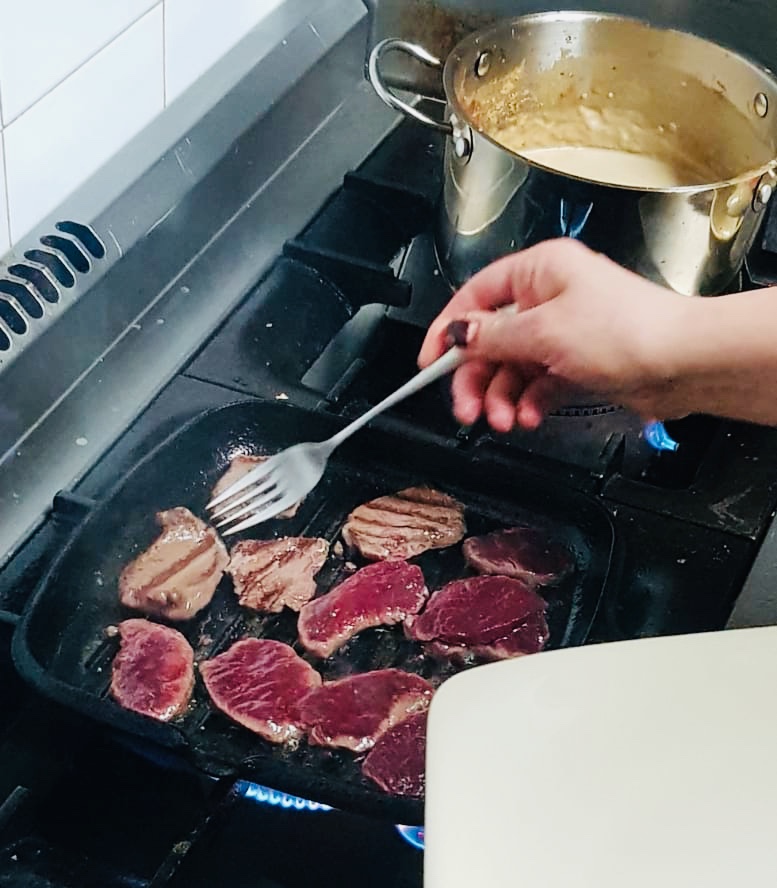