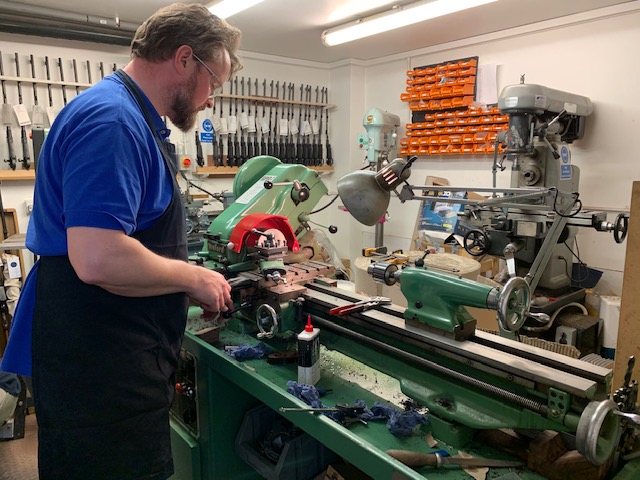 At the end of March, Charles Spencer, a keen deerstalker and game shooter from London, joined the Rigby team for a week of work experience. As someone who’s shot for the past 30 years here in the UK, his girlfriend Lisa, thought what better Christmas present would there be, than a week of work experience with the John Rigby & Co. team at their Pensbury Place workshop. Read on, to find out how he got on.

I was delighted to discover that I would be having a week of extremely exciting experiences, seeing behind the scenes at Rigby. Although I’ve used guns and rifles all my life, I never actually seen ‘behind the veil’ with guns being fabricated, so it’s been fascinating.

This week has been a very busy week with the team, so far I’ve done polishing, filing, and I was asked to copy a steel pattern from which the .275 stock is cut. This involved filing down to a few thou tolerances, which was quite an interesting and meticulous task.

I then did a day on the range, firing a .275 Rigby, .416 Rigby and .450 Nitro Express hammer gun. We were check firing guns which were just about to be delivered to customers and on the way home from the range we visited Rigby’s barrel blackers which was a fascinating surprise.

The following day it was onto woodwork and trying my hand at some chequering. I can’t say that my attempt will be something that Rigby will put on a gun to be sold to a paying customer. It was frankly embarrassing just how bad I was, or conversely, how incredibly impressive the Rigby stockers are who turn these guns out day after day, with not a single error or mis-cut anywhere. I know some members of the team have been making guns for 30 years and I’ve only been doing this for 30 seconds, but it’s still terrifically impressive.

I’ve also had a go at some engraving on metal, by hand and chisel, and I was almost as bad at that as I was at chequering, but it simply gives you a marvellous idea as to just how astonishingly talented the professional engravers at Rigby really are. Not only are they getting the line and depth right each time, but they have an ability to draw proper artistic renderings of what they are being asked to engrave, and on the unforgiving medium of steel.

The more I try this line of work, the more it rubs home just how astoundingly skilled and talented these people are.

It’s my last day today and I’m making a tool which will assist the engravers in making sure every little rose or flower they engrave on the head of a bolt is perfectly centred. I’m making a guide into which a bolt will be inserted, and then making the matching tool which will cut a little tiny circle into the top of the bolt for the engravers to use as their centre point to add petals around.

Out of the whole week, the thing I’ve enjoyed the most is the spirit and comradeship of the guys on the bench. It’s a super working environment, each gunmaker, stocker or engraver is a specialist in their own right. They work incredibly well together, and they are a very happy team.

The most difficult thing I’ve found to work towards this week is the tolerances – they are extraordinary. Earlier this week I made something, and it was a tenth of a millimetre too big, so I said, “it’s a bit too big” and I was looked at dolefully because really that was A LOT too big! The tolerances that the guys work towards just go to show how incredibly talented they are. I think a millimetre or two is a professional builder’s tolerance.  Here it is literally a thou or two and that’s incredible.

I have never owned a Rigby, but I would be a very happy man if I had the means to afford one. After this week, my Rigby of choice would have to be a Highland Stalker, mostly because I haven’t had the opportunity to hunt Big Game, so the larger rifles aren’t much use to me at present. However, the Highland Stalker would be a magnificent rifle as A) it would be directly useful for me and B) they are beautifully made. I would likely opt for the .275 Rigby calibre, as I used to own a 7×57 some years ago, so a .275 Rigby would be just right.

This whole experience has given me a better idea as to why these guns take so many hours to make, and that’s because they are made to such astonishing levels of perfection.