The Beauty and the Beast by Khalid bin Rashid Al-Khalifa

It all began in the summer of 2018 when I finally approached Rigby and began the journey of building not just a rifle but a work of art. The Highland Stalker pulled me in by its pre-war looks and distinctive craftsmanship. It was my first custom built rifle, and the story that unfolds is a memory I will always cherish.

The first Royal stag I shot in the Highlands of Scotland should have been on my wall, but instead it was lost by my taxidermist and has never been seen since. All that I had left were pictures of the beast on the back of a Highland pony, as if it were a scene from an 18th century painting! Therefore, I asked Rigby to engrave that photo on my rifle to materialise that unforgettable memory.

Once I finally had my hands on the rifle, which I admired for hours, it was off to the hills. My only goal that day was to get any stag with my new Highland Stalker, but as the story unfolded, it wasn’t just any stag but a beast of a lifetime and one I never thought I’d lay eyes on in my entire life!

After a lovely stalk amidst breath-taking views, we spotted our stag who was laying down watchfully guarding his hinds. We got into position, where we were concealed by tall grass and glassed for a little over 20mins, which felt like 20 hours! With the expertly finished stock resting on my right shoulder, I watched the stag through my Swarovski z8i scope, impressed by how he roared constantly.

Surrounded by towering pine trees, I kept my focus on the beast, not letting him out of my sight. With every move he made swinging his massive head around, I could feel my heart pound so hard that my whole upper body thumped with every beat.

From a distance of 200 metres, I could see how huge he was, but I refused to count his points because regret would just overcome all other feelings if I missed my chance. All those thoughts were behind me once he stood up broadside. He was facing my right, at a lower angle from myself and the accompanying head gamekeeper, Ewen.

Overwhelmed with emotion, with the crosshairs of the scope about three inches above where I usually shoot, I controlled my breathing while gently pulling the trigger waiting for the shot to surprise me. Bang! “Perfect” said Ewen. He walked about 10 steps and collapsed. I was thrilled, happy and shocked all at the same time.

With poor cell reception, I gave my wife a call to share the monumental news. Only I didn’t quite know how big he really was. At 50 metres away I started to realise that the beast I’ve just shot would create a commotion within the community – 18 points on a 24 stone hill monster! Instantly, I knew I would never repeat this day in my lifetime.

I always honour my trophies no matter the size or the points, due to the hard work of stalking and the accurate shot. After working with Rigby on this rifle for the past two years, I now know that it was built for this day. As I was taking pictures, there was one photograph that really captured the essence of the whole experience. The stars must have been aligned to bring together my beauty and this extraordinary wild beast. 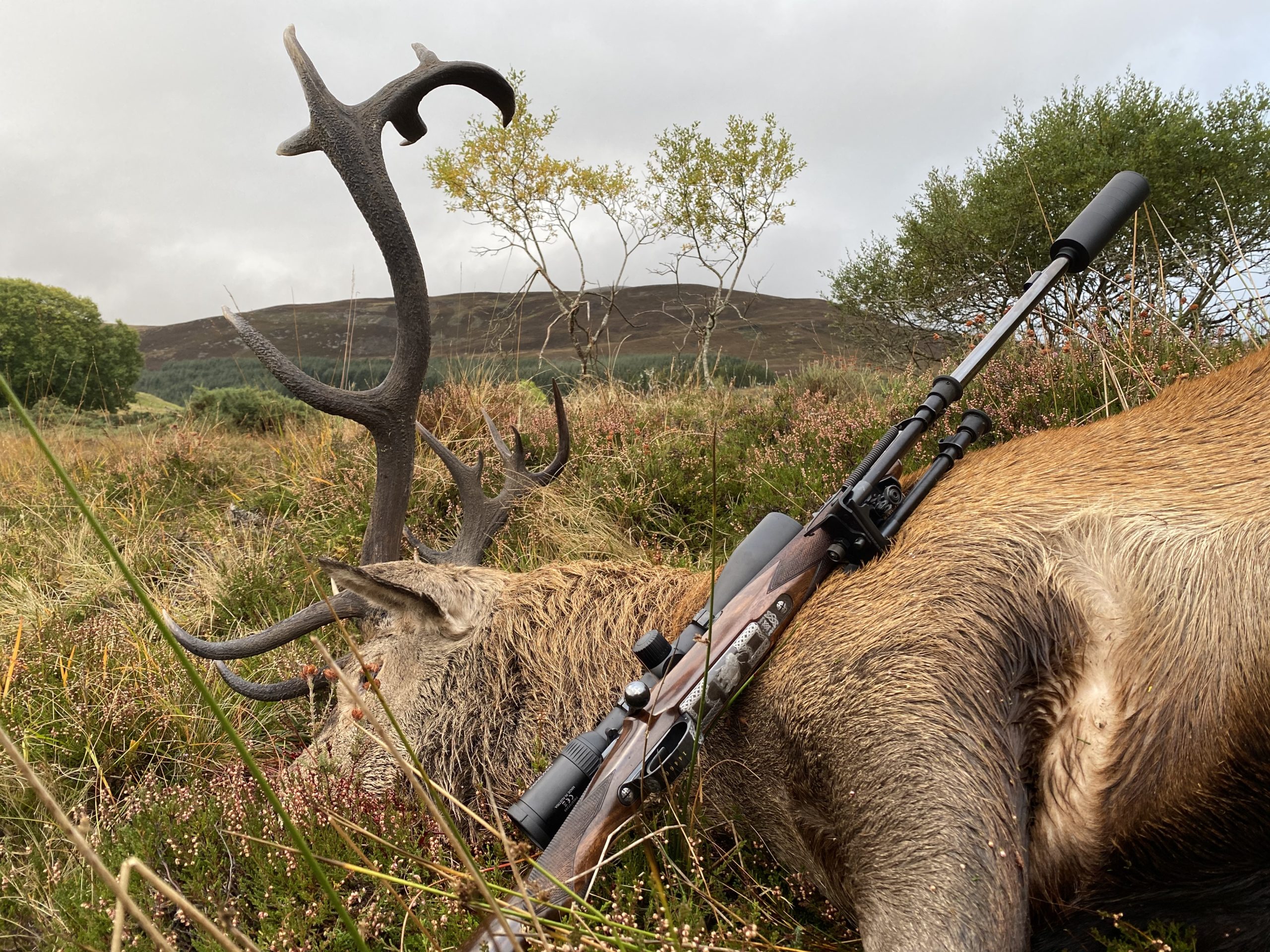