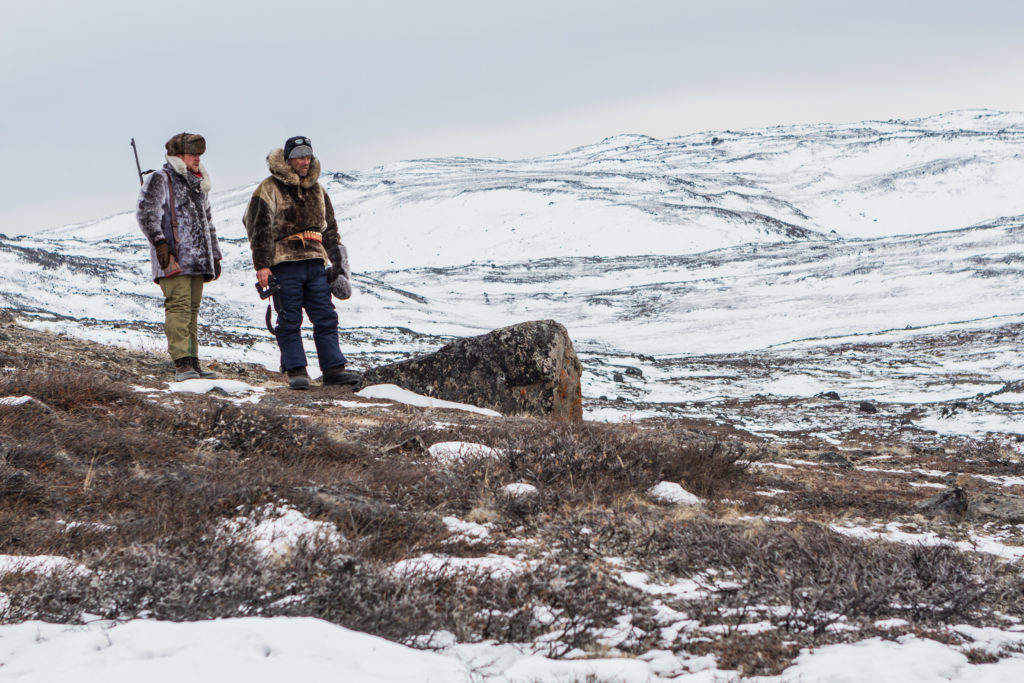 Hunting with the native Inuit people of Greenland

Since learning about them in the hallowed pages of National Geographic as a boy, cultures who relied on hunting for survival have captivated my imagination. A few years ago, I finally fulfilled an ambition to hunt with the native Inuit inside the Arctic Circle. Researching how they cope in brutal subzero temperatures, I wondered would I be able to cope with such extremes?

As the world’s largest island, Greenland covers 2.2 million square kilometers and quite simply is a vast and bleak landscape. The unforgiving climate, where most plants can’t survive, meant the diet of its inhabitants historically consisted largely of animal protein. Imported frozen food ensures that survival of the native Inuit is no longer dependent on hunting, but the spoils are still a source of sustenance. 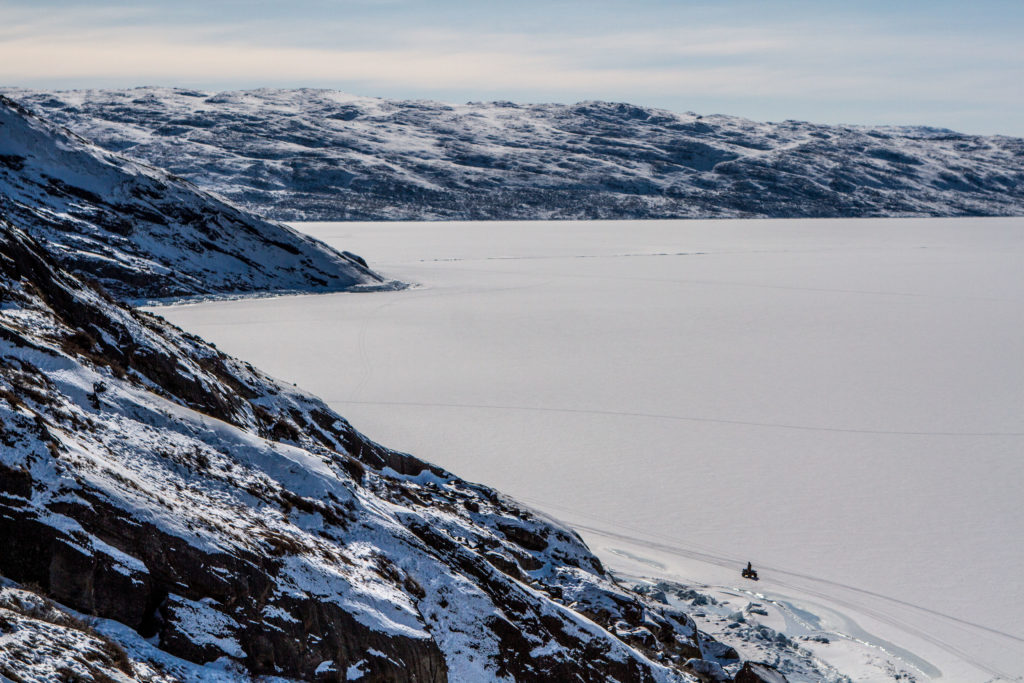 My polar safari started in Kangerlussuaq, a settlement of 530 people in western Greenland. Situated on the outer edge of the Greenland ice cap, Kangerlussuaq was once an American air base. The American influence remains, but it was the many species of Greenland’s endemic fauna found in the area which drew me there. The Inuit are highly skilled hunters targeting caribou, polar bear, seal, walrus, king eider duck, ptarmigan, Arctic hare, Arctic fox and muskox. On arrival, I met my guide Karsten Lings who drove me to my basic but cosy cabin nestled on the edge of the spectacular 190-kilometre Kangerlussuaq Fjord.

A sunny morning revealed wind-scoured mountains fringing the fjord, and I breakfasted on fish and eggs ready for my Arctic hare hunt. Riding on the skidoo behind Jan Pedersen, one of Karsten’s guides, the journey over the frozen fjord proved nerve-wracking. The ice needs to be at least 10cm thick to support a skidoo, and I had to put out of my mind the stories of people going through the ice to their doom.

We soon spotted the first of our Arctic hare, despite its brilliant white coat providing excellent camouflage. Stalking over challenging terrain to within shotgun range, we were ready to begin. When flushed, the hare bolted higher up the rock faces offering some spectacular sport. 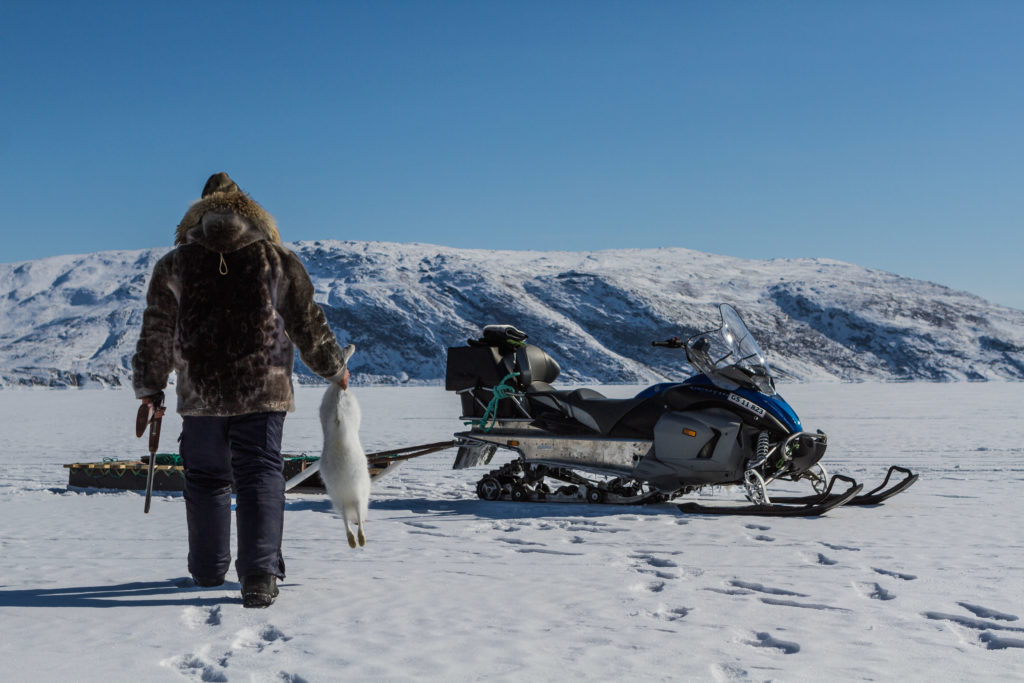 Having taken two brace, it was time to try Inuit ice fishing. Sawing a one-metre-deep hole into the hard packed ice at the edge of the fjord offered a welcome warm up. The fish were hungry, and we soon hooked 12 Arctic cod – some to leave as bait for Arctic fox – to finish the day. 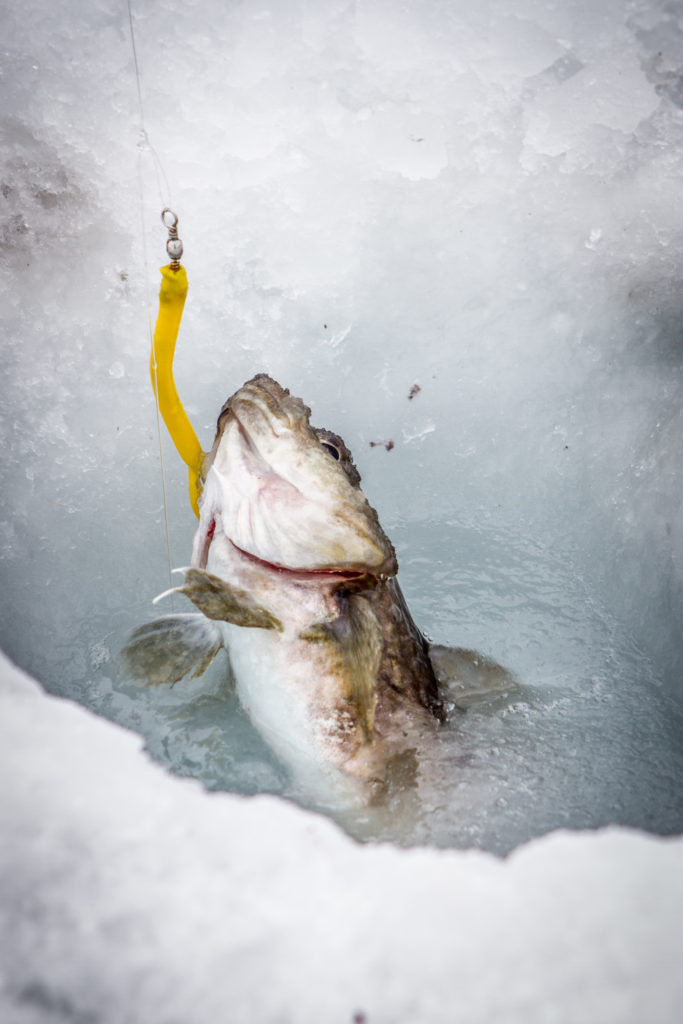 Day two saw us back on the ice, this time with Arctic fox and ptarmigan in our sights. The former is native to the Arctic regions and well adapted to the environment. Thick, deep fur, a good supply of body fat and a system of countercurrent heat exchange helps it retain core body temperature. They prey on any small animals they can find, and will also eat carrion, berries, seaweed – and that day, I hoped, Arctic cod.

As we neared the bait, I loaded the rifle and saw a white flash, disturbed by the noise of the motor. The skidoo slithered to a standstill. The skid supported the rifle’s forend like a bi-pod as I lay on the ice. I took a confident shot with the 6.5×55 at over 200 metres using little holdover to compensate. The fox dropped motionlessly. Remarkably, another, this time with a brown coat, appeared at the edge of the fjord. I cleanly dispatched this too, within seconds of the last. Ptarmigan hunting followed the same ‘spotting and then a clamber’ format as the previous day’s hare hunt, which made for some rewarding sport.

I woke up early on day three, filled with excitement about my traditional Inuit hunt for muskox. I had chosen to take my open-sighted .416 Rigby Big Game rifle and its accompanying Hornady DGX (Dangerous Game Expanding) 400-grain ammo to topple this largest thick-coated mammal. 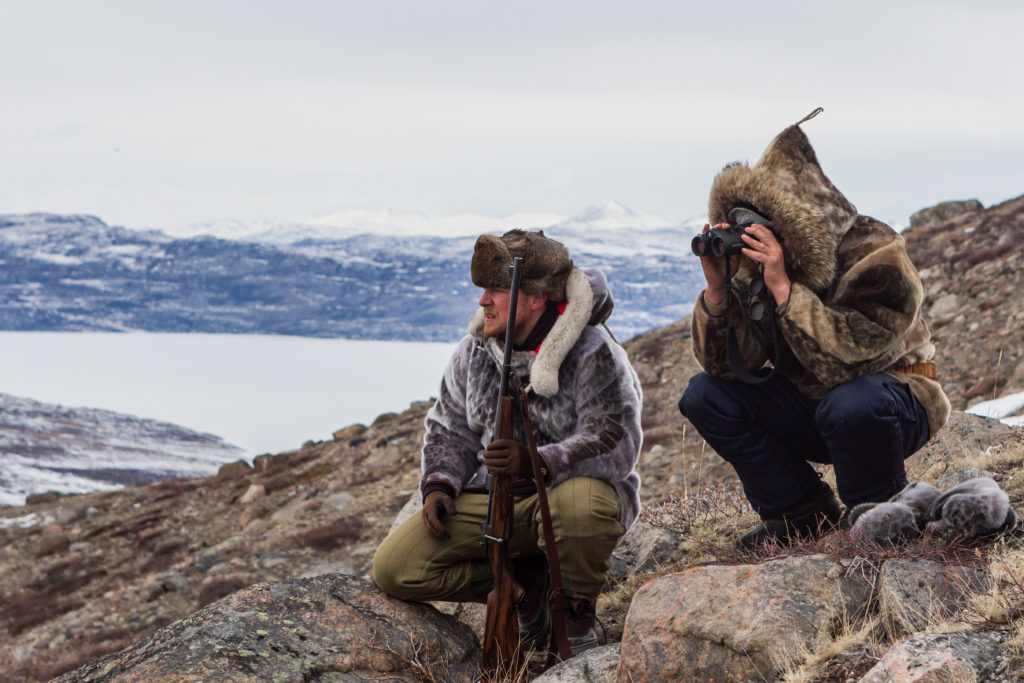 Little stirs in Greenland. When the skidoo stopped, the only sound I could hear was ice sizzling onto the hot exhaust, and I marvelled in the vastness of the scenery. Walking leads to sweating, which leads to chilling. Taking off a glove to adjust a scope can result in near frostbite, and such extreme cold requires careful and close attention. We started our long hike onto the tundra. Muskoxen are not the hardest creatures to hunt but without trees and in arctic conditions, it is a superb sporting challenge. Planning a long downwind route using dead ground is the only way to win.

I eventually came upon my animal feeding around 100 metres away, as far as I wanted to shoot with the express sights of my Rigby. I rose up and took the first shot freehand. With the absence of seeing a reaction through a scope, I immediately took an insurance shot. The mature bull ran a matter of metres and toppled. The satisfaction was immense, and we managed to get the skidoo close enough to load the animal so we could skin it closer to the safety of camp. 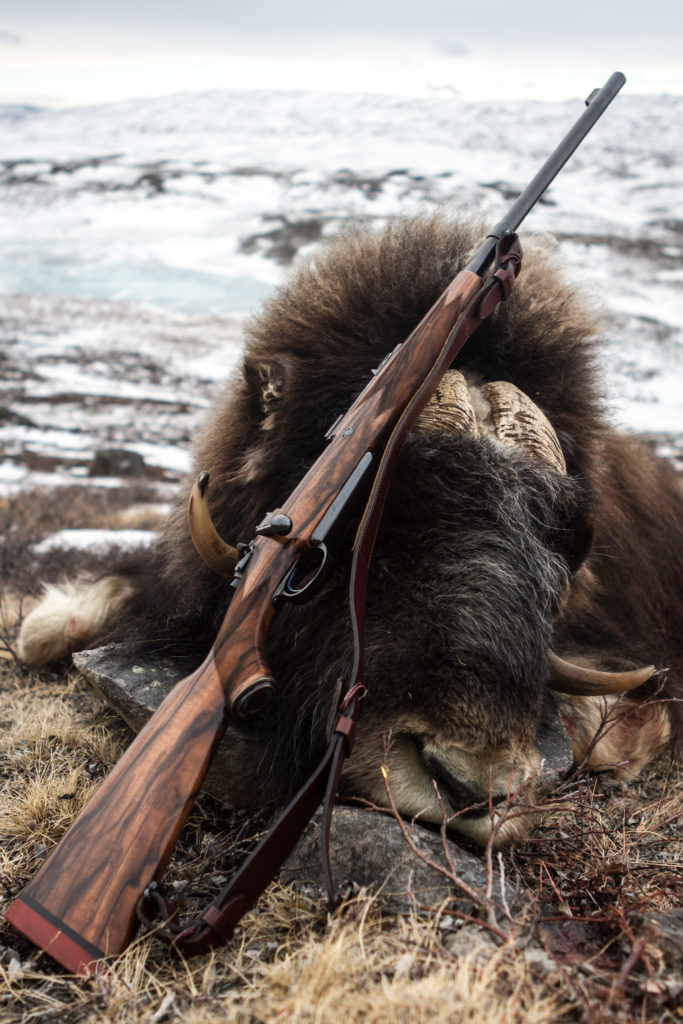 Daylight was fading as I began my final task of my polar safari. Sitting outside using a head torch to skin both arctic foxes in readiness for the tanners, I glanced up at what had been a dark sky. Green hues lifted and swirled across the sky like isobars on a pressure map. Having taken all of the animals I set out to; I was now gifted a fine display of the Northern Lights. Hunting in the brutal landscape of Greenland alongside the skilled Inuit people is a unique adventure, and one I would highly recommend.

For more information on hunting in Greenland, visit: www.polarhunting.com 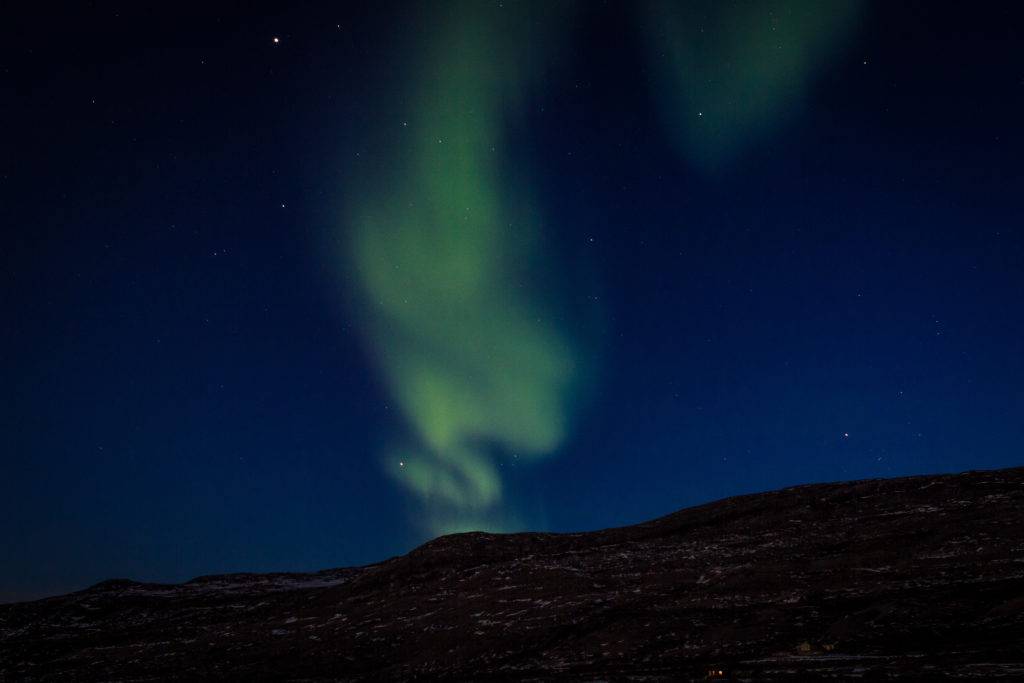