Rigby further adds to its $150,000 SCI auction Lot by including original painting by David Southgate 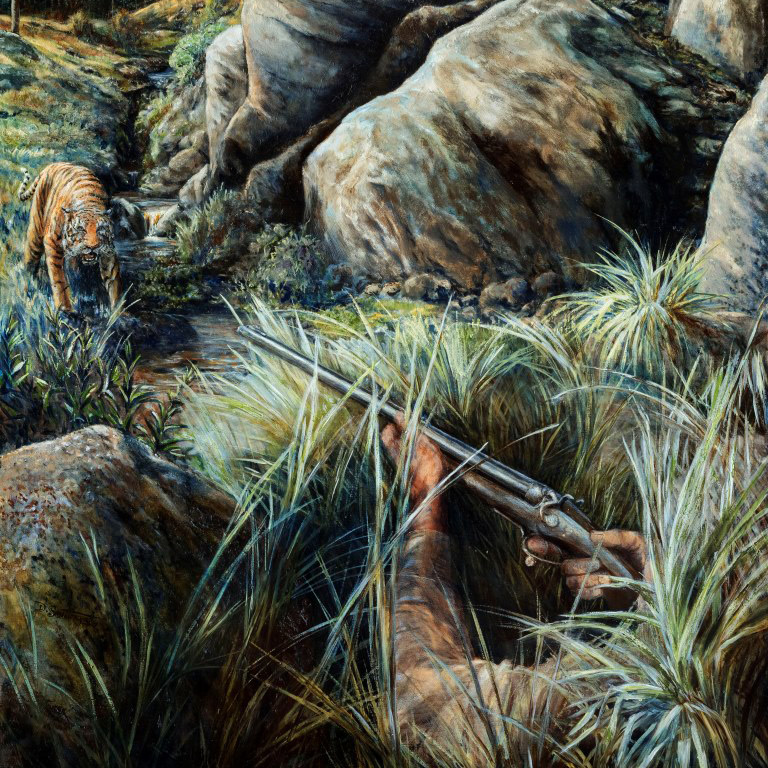 Entitled “Last Moments of the Champawat Maneater”, the painting depicts legendary hunter Jim Corbett dispatching a man-eating tigress, which had claimed 400 lives in India. It was as a mark of gratitude for this deed that he was presented with a .275 Rigby that went on to feature so prominently in his future exploits and memoirs, and which will be on display at the SCI Convention.

Mr Southgate approached Rigby to discuss donating his painting after reading about Rigby’s donation in SCI’s Safari Magazine. Rigby bought the painting and Mr Southgate will donate the purchase money to tiger conservation projects at the Jim Corbett National Park in India.

Marc Newton, Managing Director of John Rigby & Co, commented: “It is an honour to have someone with David’s knowledge and passion give his support to this project. The painting is a perfect fit with the rifle and we’re delighted that SCI’s conservation work and the Jim Corbett National Park will benefit from this generous gesture.”

David Southgate added: “I first became enthralled with Corbett’s hunting tales at the age of 13 and have re-read them repeatedly since then. The opportunity to contribute to the Lot celebrating one of my childhood hereos and to raise funds for conservation in an Indian National Park, named after him, was too good to pass up.”