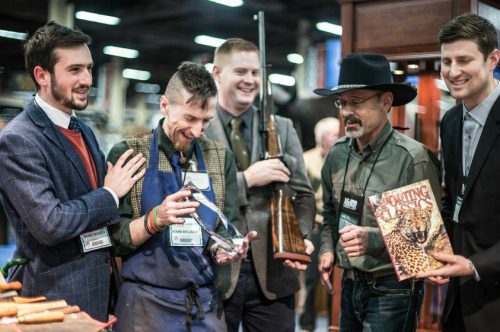 John Rigby & Co was delighted to receive the Sporting Classics Award for Excellence for its Big Game rifle at the Safari Club International Annual Convention, held in Las Vegas in January.

The award was presented to the Rigby team by Ron Spomer, rifle editor of Sporting Classics, the renowned global hunting andfishing magazine headquartered in South Carolina.

The Rigby Big Game rifle is built on the newly manufactured Magnum Mauser action, which is based on the classic and time-tested Model 98 design. Its barreled actions are supplied by Mauser before being assembled into superb hand-finished rifles by master craftsmen at Rigby’s London workshop.

Marc Newton, Managing Director of John Rigby & Co, commented: “To be given this prestigious award less than two years after Rigby’s return to the UK is a huge accolade for the whole of the team and I am very proud that Rigby’s gunroom manager David Miles and factory manager Mark Renmant instapax.com were with me at the ceremony. The award is now on display in the workshop where everyone who has put their heart and soul into creating the Big Game rifle can see it and be reminded of this superb achievement.”

Mark Renmant, who designed the Big Game rifle stock and been involved with Rigby for the past 33 years, added: “I was enormously proud to go up and receive this award which recognises the huge team effort put into creating the Big Game rifle. This was a tremendous moment, a great honour for me personally and for the Rigby team, and something I will remember for many years to come.”